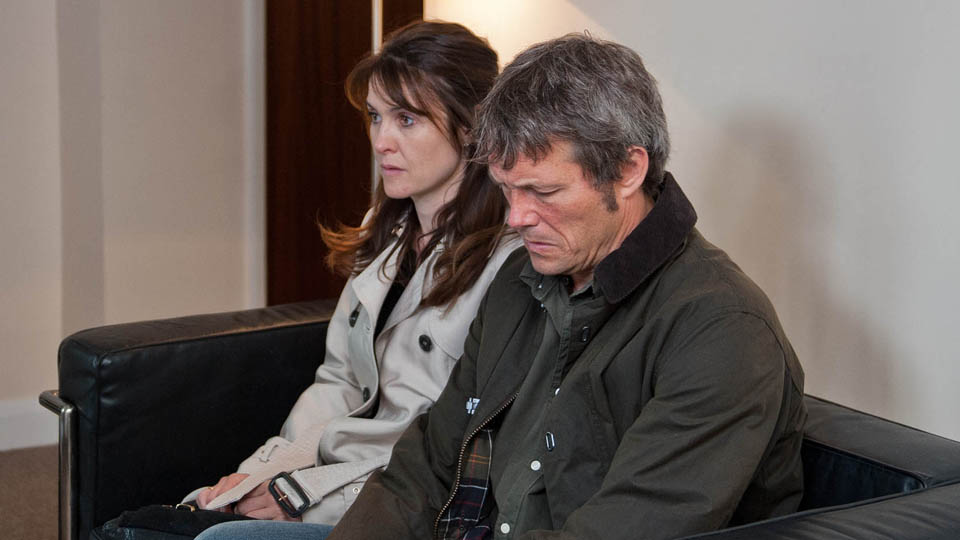 Another week of tense drama in Emmerdale awaits.  Read on…

Has Ross’ body been found?

Pete is panicked as he watches his mum and dad head off to identify Ross’ body and tells Finn that he should prepare himself for the worst.  At the mortuary, Emma and James nervously wait to see the body.  Afterwards, they try to ring Pete but he doesn’t answer.  It seems the horrible experience is helping rekindle James and Emma’s romance if nothing else.

Pete is convinced that the police will be knocking on his door any minute and he drops his bombshell to Debbie – he killed Ross.  Debbie is reeling and can’t believe what she has been told.  Pete is angered by Debbie’s reaction and when she asks that they go and find the body, he accuses her of still loving Ross.  Debbie is horrified by Pete, thinking he’s another Cameron she runs out into the street and into the arms of James.  Pete tells James what happened to Ross and a devastated James asks Pete to take him to the body.

Cain’s angry to learn Pete is hanging around but Moira thinks he wouldn’t attack Debbie as he worships the ground she walks on. Cain, however, points out Cameron did as well! Later, Debbie’s unnerved to see Pete in her house. He tells her he is just picking up his stuff, but he’s heartbroken to see she’s terrified of him.

Rachel says goodbye to the village

Zak is worried about Sam and when he sees him and Rachel arguing he tries to raise the matter with her, but gets a bad reaction.  Soon Sam is under pressure to tell Zak and Lisa that they can’t come to Ruby’s funeral causing them to worry about him even more.  Zak confides in Lisa that he thinks Rachel is beating Sam.

Ali, who has returned for Ruby’s funeral, is also getting suspicious when Sam’s phone goes off when he’s carrying the coffin and Rachel is furious.  Later, in the pub, Rachel tells Sam he ruined Ruby’s funeral and as he follows her outside, Ali is witness to Rachel’s behaviour and makes a life changing suggestion to her sister:  she wants her to move to Liverpool with her.

Sam is awkward with Rachel, but devastated to be losing her.  Rachel goes to see Megan to thank her for all her help and is left shocked when Megan reveals she didn’t have a miscarriage and is in fact still pregnant.

As Rachel waves her goodbyes, Zak tells Megan what has been happening with her and Sam.  Megan goes to see Sam, who is furious Zak told her what has been going on, but is completely thrown when she rushes out to be sick.  He insists on taking her to the doctors and later realises she’s still pregnant.  Knowing she’s living in the B&B, Sam invites her to move in with him at the cottage which has Jai seeing red and he evicts them.

Rishi and Priya try to appease clients who have heard the gossip about Jai and are threatening to cancel orders.  Megan goes to see Rishi and asks for his help.  Rishi warns Jai that they need to recover lost orders or they will have serious cashflow issues and says that he’ll only help with the business if Jai agrees to let Megan stay rent free with Sam.  How will Jai react?

Brenda is under pressure to smuggle items into prison

Bob and Brenda are worried that Harriet hasn’t managed to track down Carly yet and Bob is left uneasy when his wicked cell mate Ged, tries to coerce him into getting Brenda to smuggle stuff into prison for him.  Bob tells Brenda but will she go through with it?

Ged arranges for his friend to meet Brenda and give her a sim card to sneak into prison for him.  Brenda agrees to go through with it, but is terrified when she sets off the metal detector at the prison.

At the prison, Bob tells a terrified Brenda that she won’t have to sneak any more stuff into prison and hopes his bravado has reassured he. Later, in the cell, Bob stands up to Ged but is wary when he agrees not to go near Brenda again. He worries he has made things worse.

Later, Harriet’s shocked when Bob rings her and says she has to change her statement about Ged because if she doesn’t, Ged will hurt Brenda. Harriet tells Bob to lie to Ged that she’ll do what he wants, hopeful Bob will be released before Ged goes to trial.  She’s playing with fire!

Val’s voice is heard loud and clear from beyond the grave on a DVD she recorded and her words are sharp as ever!

Alicia tells Jacob they can’t go back to Portugal at the moment as David needs to stay and look after Eric.  The latter is struggling and soon turns his emotions on poor Diane.

Rakesh is furious to learn Jai told Kirin about his past with drugs.

Doug tries to show his fun side, but maybe he’s chosen the wrong occasion?