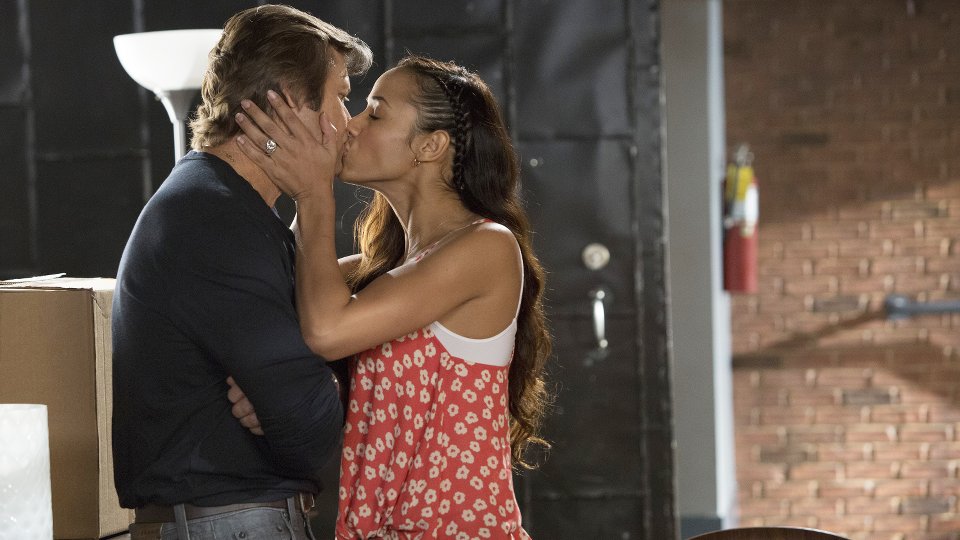 A dirty secret found its way into the wrong hands on the latest episode of Devious Maids.

If you haven’t seen the latest episode of Devious Maids and don’t want any spoilers we suggest you stop reading now. If you have seen it and want to relive all of the action keep reading.

Genevieve (Susan Lucci) was visited by the police about the murder of Louie Becker (Eddie Mills) after it was revealed that she had an affair with him. Aided by Michael Stappord (Brett Cullen) as her lawyer, Genevieve was very evasive and Zoila (Judy Reyes) was surprised to find out what her employer had been up to. During the questioning Genevieve lost her temper and told the police that she ‘loathed’ Louie before storming off.

Zoila decided to talk to Genevieve to find out more about her relationship with Louie. After a lot of prompting, Zoila found out that Genevieve had made a sex tape with Louie and she was sworn to secrecy about it. Unfortunately Zoila couldn’t keep her mouth shut and told Carmen (Roselyn Sanchez) who in turn told Evelyn (Rebecca Wisocky) to distract her from the terrible ironing she’d done. Armed with the knowledge Evelyn went straight to the country club to find out more about the sex tape and get revenge on Genevieve for telling the police that she flirted with Louie.

After a spot of blackmail, Evelyn got her hands on the video and released it to everyone at the country club whilst Genevieve was having dinner with Dr. Neff (John O’Hurley). Genevieve confronted Zoila about telling her friends about the sex tape before telling her she was furious with her and going to Greece with Dr. Neff.

Taylor (Brianna Brown) struggled to cope when news of Louie’s murder broke. Michael quizzed her about her relationship with Louie and the night that he got murdered. Taylor tried to brush his questions off but he was persistent and started to ask about Blanca’s (Naya Rivera) whereabouts. When Michael was out of the house, Taylor started necking back pills and Katy (Grecia Merino) asked questions about what she was doing.

Michael paid Marisol a visit to find out if she had any contact information for Blanca. He left with the contact details for Blanca’s sister after brushing off Marisol’s questions about Taylor. Michael tried confronting Taylor again and shared his suspicions that Blanca knew what happened to Louie. He told Taylor that he sent Louie to their house the night of Marisol’s book party to catch Taylor with her lover. Michael pleaded with Taylor to tell him the truth but she refused.

Taylor was caught making a frantic call about Blanca, which woke Katy up. Thinking she was helping Katy poured Taylor’s pills into her wine glass. The next morning Marisol found Taylor passed out on the couch and called an ambulance.

Marisol (Ana Ortiz) struggled with her attraction to Jesse (Nathan Owens) and was less than pleased when he arrived early to clean her house. With no make-up on and fresh out of bed, Marisol behaved awkwardly as Jesse poked a little fun at her. Marisol suffered further embarrassment when Carmen stopped by and the two women talked about Jesse’s attractiveness, which he overheard.

Carmen delighted in telling all of the other maids about Jesse and they gave Marisol unsolicited advice about her love life. They tried to encourage her to ask him out but she was having none of it. Rather than asking Jesse out, Marisol tried to clear the air but was caught off guard when he admitted he found her attractive.

Rosie (Dania Ramirez) and Spence (Grant Show) helped Ernesto (Cristian de la Fuente) move into his new apartment but tensions soon arose when Miguel (Alejandro Vera) accidentally smashed something and Spence and Ernesto disagreed about how to discipline him. Ernesto expressed a desire to take Miguel to church on Sunday, which upset Spence as that’s the day he spends with him. Rosie promised to talk to Ernesto so that Spence could still spend Sunday with Miguel.

Rosie stopped by Ernesto’s to talk to him, as she’d promised Spence, and was caught off-guard when he appeared in nothing but a towel. She started to muddle her words before eventually getting her point out and quickly leaving. Following her encounter with Ernesto, Rosie had a sex dream about her former husband and woke up in the night shocked.

The next day Rosie visited a priest to talk about her love triangle and was told that legally she was still married to Ernesto and that her marriage with Spence wasn’t valid. That evening Spence tried to get intimate with Rosie but she pretended she was coming down with something and told him she’d sleep on the sofa.

Marisol stopped by the Powell house to see how Carmen was getting on and was shocked to see her friend engaging in S&M with Adrian. Later Carmen stopped by Marisol’s to see her and was very enthused to be greeted by Jesse. Marisol told Carmen that she saw her with Adrian and told her she had to stop doing what she was doing with him.

Adrian called a meeting with Sebastien to ask him to find a house with a room that he could use as a sex dungeon. During the chat Adrian started to suspect that Sebastien was Carmen’s lover, which was confirmed when he spied them kissing. Carmen told Adrian she wouldn’t do S&M with him any more and he blackmailed her by telling her he knew about Sebastien.