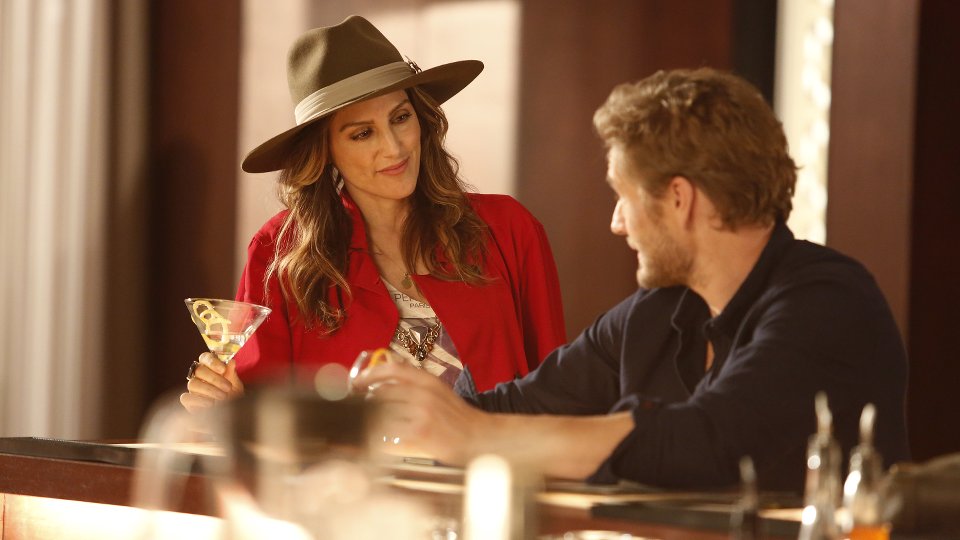 Calista (Jennifer Esposito) made her presence known and struck up a friendship with one of the women in the latest episode of Mistresses.

If you haven’t seen the latest episode of Mistresses and don’t want any spoilers, we suggest you stop reading now. If you have seen it and want to relive all of the action then keep reading.

Joss (Jes Macallan) met Calista and it’s safe to say they weren’t firm friends from the off. The two women met when Calista stole Joss’ parking space leading Joss to lay into her. After finding somewhere to park Joss went to Savi’s (Alyssa Milano) travel agent to find out where her sister had disappeared too. The agent wasn’t initially helpful but Joss slipped her some money to get answers. Unfortunately it wasn’t money well spent as the only trip Savi had booked with them was two years prior when she planned to go to Australia with Harry (Brett Tucker).

Leaving the travel agent, Joss was alarmed to find her car had been towed and once again lay into Calista who watched it happen. Calista told her to get in her car and stop causing a scene because she was on a stake out. Calista revealed that she was watching her husband and trying to catch him in the act with his Mistress. She asked Joss if she’d seen him and the two women spotted him on his own coming out of a hotel. Calista took some pictures then offered to take Joss to the tow yard to get her car back.

On their way the two women had a chat about their lives. Calista revealed that she had to get proof her husband was cheating otherwise he could take half of her money. Joss then realised that her new friend was a famous fashion designer. At the tow yard Joss gave Calista her card.

Whilst continuing to track down Savi, Joss received a call from Calista asking for her help. Joss was sent into a hotel to get evidence of Calista’s husband cheating. She saw him with a woman but when she was about to get a photo, she received a call from Italy that she thought was Savi. It was actually the hotel she had been staying in saying she left a week earlier. Taking that call meant she missed the photo op for Calista. Joss and Calista had a heart-to-heart over drinks and Joss told her that Harry was ‘the one’.

Joss tried to send an email to Savi but couldn’t get the right words so she deleted it. Harry called her whilst she was thinking about what to write and the two had a casual chat with Harry thanking her for fighting for him. The next morning Joss received a dress from Calista as a thanks for her help.

April (Rochelle Aytes) struggled to get used to Mark (Rob Mayes) living outside her house in his R.V. but plastered on a smile for the sake of Lucy (Corinne Massiah). Mark treated April’s house like his own and April was surprised to see the state of Scotty’s hair after spending one night with Mark. Giving him a hand with his laundry, April was a bit bitchy about the state of the bed sheets they were using and offered to give him some sheets for free from her shop.

April tried to trash Mark in front of Lucy, which caused a heated discussion. She then tried to pay her for babysitting Scotty further upsetting Lucy and causing her to run off. Mark later appealed to April for help when Scotty faced suspension from his school over a fight. April served him some realness and Mark admitted he was out of his comfort zone looking after his nephew on his own. Mark told April he and Scotty were going to leave after the way she’d treated them. April felt bad about what had happened and offered to help him deal with Scotty’s principal to prevent his suspension.

April gathered Mark, Scotty and Lucy together and invited Mark and Scotty to live with them.

Falling out of favour

On her new spiritual journey, classic hot mess Karen (Yunjin Kim) started to attend church again. She was disappointed when April failed to show and started to question what her place in the group was without Savi. Karen also began treatment in preparation for the procedure to help Vivian (Sonja Bennett). Returning home she found a postcard from Savi saying she was in Italy and asking her not to tell Joss (April received one too). After being brushed off by Joss, Karen called Vivian and went to visit her at the hospital. Karen poured her heart out to her new friend about her anger towards Savi.

Karen had a heart-to-heart with April and shared her concerns after her friend snubbed her at church. April apologised and assured that Karen will always be a friend with or without Savi. Joss and April turned up to the church to support Karen and show her how much she meant to them.

Harry arrived at work to find that Greta’s (Helena Mattsson) silent partner Ellis (Kavan Smith) had taken charge of the business whilst she focused on a new European branch. Ellis was holding a staff meeting and made it clear that Harry was kitchen staff and therefore not particularly important to him. Nice! Later on Harry discovered that Ellis fired all of his staff because they weren’t good looking enough. He stormed into Ellis’ office to demand an explanation and was promptly shut down.

Harry and Ellis had another confrontation where Ellis revealed that Scott (Justin Hartley) sold his shares in the business to him meaning he owned the majority of the business. Ellis then put Harry in his place and told him to cook or quit. The next day Harry didn’t turn up to work leaving Ellis in a panic as he had important guests dining at the restaurant that night. Harry was at home working out and taking his frustration out on a punching bag. He found an old note from Joss that inspired him to fight back and he headed into work.

Harry apologised to his team and made a variety of dishes off the menu. He researched the VIPs so he could sweet talk them and proved to be a big hit. His move meant that he showed Ellis how vital he was to the restaurant giving him the upper hand.

At the end of the episode Calista introduced herself to Harry and told him she’d heard a lot about him. Uh oh!