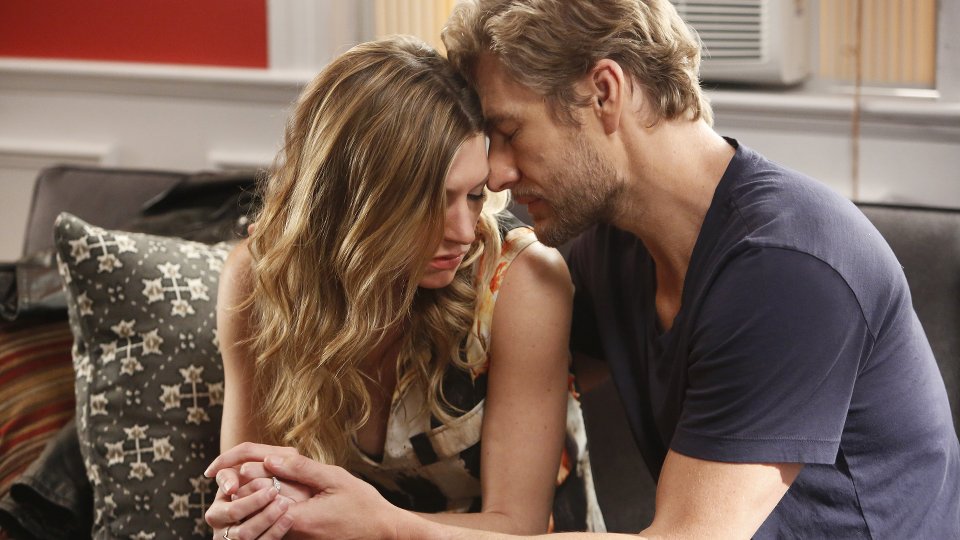 One of the original gang did a disappearing act in the season premiere leaving the other women in a panic.

If you haven’t seen the latest episode of Mistresses and don’t want any spoilers, we suggest you stop reading now. If you have seen it and want to relive all of the action then keep reading.

Sex on the beach (nearly)

Joss (Jess Macallan) and Harry (Brett Tucker) were interrupted during their tryst on the beach by Karen (Yunjin Kim), who called to summon Joss back to the wedding she abandoned. She tried to get hold of her Joss via Harry and pieced things together realising the two were together. Before Joss got a chance to explain what was going on, she left Harry and ran back to the wedding where she discovered that Scott’s (Justin Hartley) gran had suffered a stroke. Joss tried to speak to Scott who told her he couldn’t have a conversation about them right now but agreed to let Joss go to the hospital with him. On the way to the hospital Joss was criticised by Scott’s mother for leaving everyone out in the heat claiming that caused Scott’s gran to have a stroke. Scott said he shouldn’t have surprised Joss in that way and asked if he’d lost her for good.

Whilst waiting at the hospital with Scott, Joss was called by Harry who wanted to know if she was still going to break it off with her fiancé. Joss assured him that she was going to but that she needed to pick the right time. Stuck in a tough situation Joss reached out to Karen and April for advice. The next day Joss and Harry had a difficult conversation about what the future held for them. They were interrupted by a phone call from Scott informing her that his gran had died. Harry told Joss that he loved her and that he wanted to be with her but asked that if she didn’t want to be with him to tell him.

During Scott’s gran’s wake, Joss told Scott the truth and was asked to leave. He also asked her to move out of the house asap. Scott later turned up at Harry’s drunk and beat him up before leaving him lying bleeding in front of his house. Joss arrived and was concerned when she saw the state of Harry. She told him she loved him but that she couldn’t be with him at the moment.

April found her daughter Lucy (Corinne Massiah) taking a time out on the beach after discovering hat her father had been alive but was now really dead. Lucy was angry and refused to speak to her mother about things calling her a liar. After returning home April headed to Karen’s for advice and a lot of wine, and was told by her friend that she needed to tell Lucy the whole truth.

April told Lucy the whole truth about her (now really dead) father and made matters worse. She apologised but Lucy refused to forgive her mother and asked if she could live with her grandparents. April said no leading Lucy to act out once again. In a last ditch attempt to make things up to Lucy, April invited Miranda (Kate Beahan) over so that she could meet her half-brother. Miranda brought along her brother Mark (Rob Mayes) too, who rubbed April up the wrong way with his gregarious personality. After dinner Miranda revealed that she was working on a cruise ship and that Mark would be looking after her son. Lucy suggested that Mark and Scotty live in L.A. in their R.V. so they could see each other more often.

And the results are….

Karen found out that she was HIV negative but was a little concerned when her doctor insisted on seeing her for a discussion. Expecting to be told off for having unsafe sex, Karen was surprised to learn that her doctor had secretly done a blood panel on her and discovered she was a match for a procedure that could save the life of his wife Vivian (Sonja Bennett) due to her rare blood type. After reacting angrily, Karen started to think about it and talked to April about the situation. She felt that it was a sign that she should do something life changing after her recent troubles and April suggested she get to know the doctor’s wife before she makes any decisions.

Karen arrived at her doctor’s house where he tried to get her to lie to his wife about who she was. When he was called away, Karen decided to stay with Vivian who revealed that she knew Karen was a match for her blood type. The two women had a heart-to-heart and Karen agreed to help Vivian.

Has anyone seen Savi?

Karen was the first to realise that Savi (Alyssa Milano) was missing and suspicions were raised further when April (Rochelle Aytes) revealed she hadn’t heard from Savi since the wedding either. Joss also revealed that she hadn’t heard from Savi leading Karen to declare her missing. After sending her a text, Joss was heartbroken to receive a reply saying ‘you are no longer my sister’. The women put the pieces together and realised that Savi must have seen Joss and Harry together on the beach.

Joss rushed back to Savi’s house to find it empty and kept trying to call her but got no response. The next day Joss contacted Dom (Jason George) and found out that Savi quit her job. Joss’ next stop was to talk to Harry who also hadn’t heard from her. Harry refused to feel guilty after the way she treated him during their marriage.

After being thrown out by Scott following her revelation, Joss arrived on Karen’s doorstep where she discovered that her sister was still in love with Harry. Karen let Joss stay with her until she sorted her situation out. Joss continued her mission to find Savi and drove around L.A. in a cab looking for her. She spotted Savi’s car driving past and ran down the road to catch it. Zack (Jason Gerhardt) was driving the car and told Joss that he dropped Savi at the airport and told her to give her sister space.

There’s a new mistress in town

As the episode drew to a close we were introduced to Calista (Jennifer Esposito) a famous fashion designer trying to track down her cheating husband. The desk clerk wouldn’t tell her any information so she bribed her for information that would help her catch him in the act.