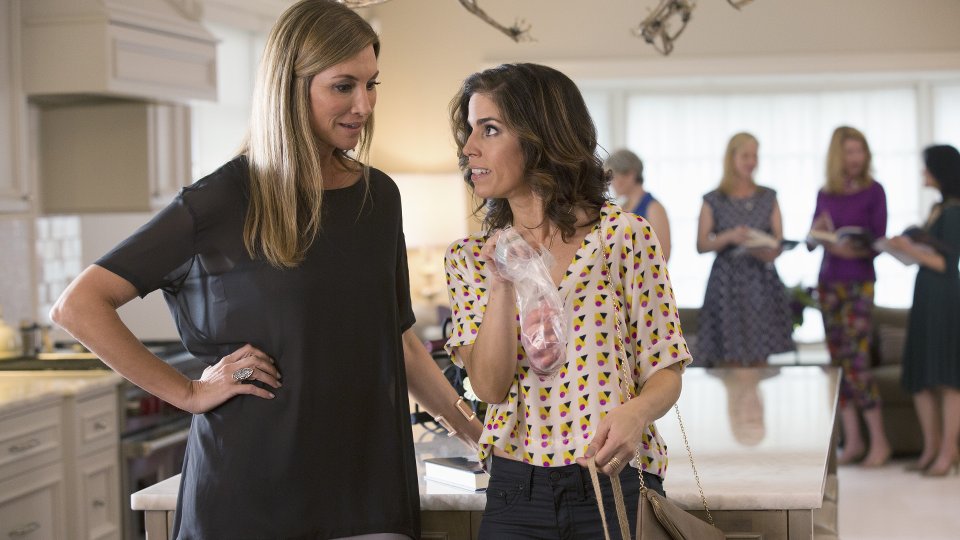 The discovery of another body part led to the identification of the victim on the latest episode of Devious Maids.

Give me a hand

Jesse (Nathan Owens) made a grisly discover whilst working for Gail (Julie Claire) this week. Whilst pruning her bushes, Jesse discovered a severed hand. Gail refused to call the police and asked Jesse to put the hand in the garden of the Powell’s seeing as a severed leg had already been found there. Jesse turned to Marisol (Ana Ortiz) for help and tried to give her the hand. She took it back to Gail’s whilst her friend was holding a book club and forced her to take the hand back and do the right thing. Gail did do the right thing but she sacked Jesse for not doing as he was told.

Ernesto (Cristian de la Fuente) continued to cause problems for Rosie (Dania Ramirez) and Spence (Grant Show) this week when he asked that Miguel (Alejandro Vera) go to live with him in Mexico. Rosie told Spence what her estranged husband had asked for, and Spence came up with a plan that would work for everyone after seeing Miguel upset that his parents were fighting. Spence proposed that he and Rosie help Ernesto settle near them for a while so he can get to know his son.

Don’t leave me this way

Genevieve (Susan Lucci) was called in to see her kidney doctor Dr. Neff (John O’Hurley) and dragged Zoila (Judy Reyes) with her fearing she was about to get bad news. As it turned out Dr. Neff just wanted to date her and Genevieve got swept off her feet instantly. She invited the good doctor over for dinner and Zoila tried to get her to ask him some questions before deciding he was the one for her. Dr. Neff asked Genevieve to go to Greece with him, which she accepted without hesitation. Later she realised that she hadn’t considered Zoila’s feelings or the promise she’d made to her about supporting her during her pregnancy and when the new baby came. Genevieve did the right thing and turned Dr. Neff down.

Marisol set about finding a new job for Jesse following his sacking, and he pointed out that maybe she could do with his help after seeing the state of her office. Marisol agreed to hire him and when Gail called later to ask for another maid, she got all hot and bothered when he flashed his abs. Marisol promptly told Gail where to stick it and got back to admiring her new hire.

Working out the kinks

Carmen (Roselyn) continued to try and fight her feelings for Sebastian (Gilles Marini) but was once again tempted to go out with him when he promised to take her to an exclusive restaurant. Before the evening arrived, Carmen was asked to help Adrian (Tom Irwin) with a back problem by walking over his back in high heels. She obliged but soon realised that he was getting off on it sexually. In return for her services Adrian bought Carmen a pair of Louboutins and asked that she wear them to help him out when he needs it. Carmen was reluctant so Adrian offered to pay her, which didn’t go down well with Sebastian. As he’d stood her up, Carmen ignored Sebastian’s protests and was talked round by Adrian.

Blanca (Naya Rivera) was absent for the entire episode and Taylor (Brianna Brown) told both Carmen and Marisol that the maid had done a disappearing act after quitting. Carmen was furious because Blanca had her dress and Marisol tried to do some digging but was cut short by Taylor who was watching the news about the body parts that kept turning up.

Michael (Brett Cullen) began to suspect that Taylor was having an affair and confronted her about it. She denied it even though he told her that Katy (Grecia Merino) had admitted she’d seen a man with Taylor whilst Michael was away.

And the murder victim is….

Louie Becker is the man whose body parts keep turning up all over, and it turns out he is a regular down at the club and a professional tennis player. Gail told the police that he’d been having a relationship with a rich woman and at the end of the episode that woman was shown to be Genevieve who was questioned about his murder.