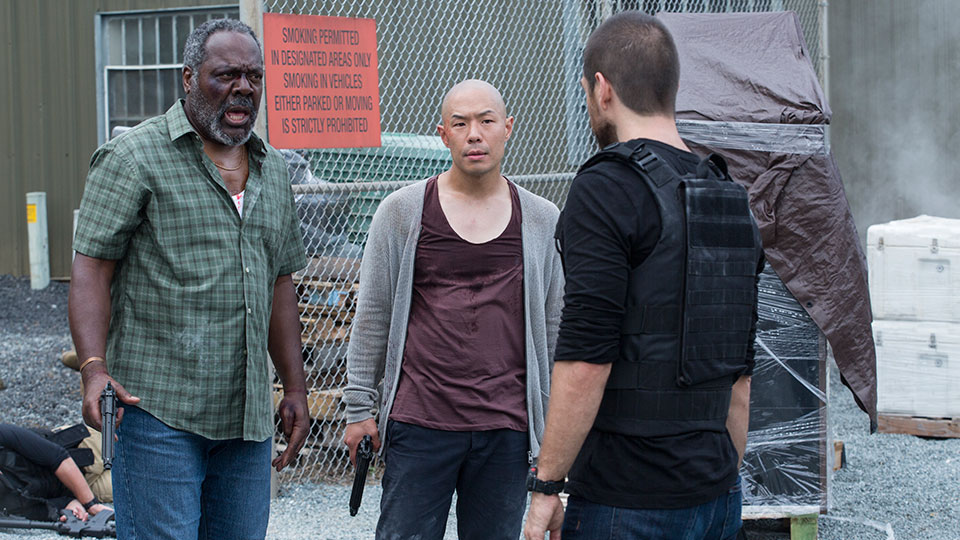 Banshee’s third season came to an explosive and emotional climax tonight in the UK.

We’re all in this together

Hood (Antony Starr) arrived at Camp Genoa to bargain with Colonel Stowe (Langley Kirkwood). Stowe insisted on having his money returned and when he started to make threats towards Hood, he was warned that Hood had insurance in the town that would call the CID if he didn’t return in 30 minutes. Before leaving Hood asked to see proof of life and was taken to the room where Carrie (Ivana Milicevic), Sugar (Frankie Faison) and Job (Hoon Lee) were being held. Seeing his friends injured, and Stowe taking satisfaction inflicting more harm on them, Hood returned to Banshee for the next stage of his plan.

As he sat loading guns in Sugar’s bar, Gordon (Rus Blackwell) arrived with a wealth of weapons of his own. The two teamed up and stormed the base launching grenades, missiles and pretty much everything else you can think of to save their friends. Gordon took position on a roof, whilst Hood covered the ground. Meanwhile Job, Sugar and Carrie managed to break out of their cuffs thanks to Job breaking Sugar’s thumbs. Carrie ran off to circle the base leaving Job and Sugar to shoot their way out to Hood.

Job got involved in a tense fight after narrowly being saved from a grenade by Sugar. Carrie ran into Stowe and the two had a bloody and very violent fight. Stowe slashed Carrie’s stomach with a knife and dragged her outside the base to use as a bargaining chip with Hood. Threatening to kill Carrie, Stowe was blind-sided by Gordon who blew his hand off allowing Carrie to break free and finish Stowe off.

The celebrations didn’t last long though as Gordon dropped to the ground and it was revealed he had been fatally wounded. Despite Sugar and Carrie’s best efforts they couldn’t save him and as all of their energy was focused into that, no one noticed when Job was shot and kidnapped by Leo (Dennis Flanagan). Hood realised too late and watched helplessly as Job was flown away in a helicopter.

Hood and co weren’t the only ones kicking ass and taking names this week. Proctor (Ulrich Thomsen) decided to forgive Rebecca (Lili Simmons) for betraying him and paid a visit to Hector (Wilson Jermaine Heredia). Giving Hector the gift of a sword, Proctor made a new deal that included taking out Frazier (Ron C. Jones) and his gang. Aided by Hector, Rebecca and Burton (Matthew Rauch), Proctor stormed Frazier’s base and a shootout left everyone except Frazier dead. He allowed Hector to finish the blind man off after he put a cigar out in his eye (ouch!). Hector hacked off Frazier’s head putting an end to his reign of terror.

Sins of the past

Bunker (Tom Pelphrey) paid his brother Calvin (Chris Coy) a visit and tried to convince him to look after his family and cut ties with the Brotherhood. Calvin didn’t take the advice well and made it clear that he was the Brotherhood and that Bunker should watch his back after assaulting two of his former gang members. After having lunch with Brock (Matt Servitto), Bunker bumped into more of his former friends and lost his cool, assaulting one of them in full public view.

Brock pulled Bunker off the man and later in the police station the two had a heart-to-heart with Bunker breaking down. He explained that his past would always be a part of him and as he tried to hold back the tears, Brock explained that the anger and rage he was feeling was shame for his past actions. Brock comforted Bunker saying that everyone had a past and that he could see that he was trying to turn his life around.

Bunker returned home and was woken in the night by Calvin and some of his old friends. Pinning Bunker down, Calvin used a blowtorch to burn the tattoos off his brother’s body.

Following the death of Gordon and the kidnapping of Job, Hood resigned as Sheriff leaving Brock bewildered. He comforted Deva (Ryann Shane) who discovered that Gordon was dead before going to Sugar’s bar and aggressively biting his friend’s head off in frustration at Job’s kidnapping. As he returned home Proctor was waiting for him and he told his frenemy that he was no longer Sheriff.

Where it all began

Throughout the episode there were flashbacks to Hood being interrogated by a mysterious man. That man turned out to be Robert Dalton (David Harbour), Hood’s former employer who turned him into a deadly hitman. The flashbacks saw Hood being tortured until he admitted he had killed his father then told he was ready to be trained up as a hitman for Dalton.

Banshee will return for a fourth season in 2016 on Cinemax in the US and Sky Atlantic HD in the UK.