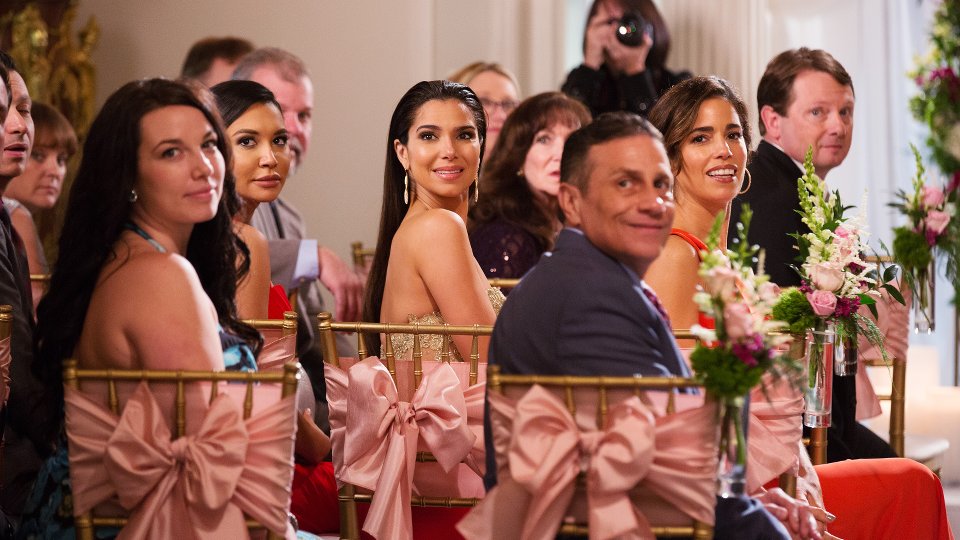 One very big secret was revealed in this week’s Devious Maids and the fallout is going to be spectacular.

If you haven’t seen the latest episode of Devious Maids and don’t want any spoilers, we suggest you stop reading now. If you have seen it and want to relive the action then keep reading.

Zoila (Judy Reyes) and Javier (Ivan Hernandez) moved up their wedding and planned a quick trip down to City Hall. Genevieve (Susan Lucci) had a different plan and insisted on hosting the wedding at her house. Despite initial resistance, Zoila agreed to let Genevieve organise the wedding and asked her to be their witness during the ceremony. Zoila grouped her friends together as she hunted for a wedding dress and Rosie (Dania Ramirez) figured out that Zoila was pregnant with Pablo’s (Alex Fernandez) baby instead. Rosie warned her that she was playing with fire by hiding such a big secret.

Turns out Zoila isn’t the only one keeping secrets. Javier was married previously, despite telling Zoila he wasn’t. The chef that Genevieve wanted to hire was Javier’s ex-wife and she refused to cater for the wedding. Zoila wanted to call off the wedding but Genevieve told her that she was even with Javier now they had both kept secrets from each other. She agreed to go along with it but Javier came clean on their wedding day throwing the wedding into doubt.

Genevieve talked Zoila into walking down the aisle but before they could say their vows they were interrupted by a surprise guest (more on that later in this recap). During the break in the ceremony, Zoila came clean and Javier called off the wedding.

Spence (Grant Show) took a call from the hospital who told him that a man named Ernesto (Cristian de la Fuente) was looking for Rosie. In shock Spence reacted angrily asking if the call was some kind of joke. Worried that it may be true Spence decided not to say anything to Rosie and ordered the hospital to tell Ernesto that Rosie didn’t want to see him. Later on Spence looked through a box of Rosie’s things and found a few pictures of Ernesto. Rosie caught him and told him a little bit about her (presumed dead) husband.

Spence arranged to meet Ernesto and pleaded with him not to tell Rosie he was still alive yet. Ernesto told the story of how he’d been kept a prisoner with the cartel leading everyone to think he was dead. As Spence left their meeting, Ernesto followed him back to Genevieve’s where he made his presence known during the wedding leading Rosie to faint. Ernesto tried to see Rosie but her friends blocked him. He gave Marisol his number and left the house. Spence meanwhile was comforting Rosie and came clean that he knew Ernesto was alive leaving her furious.

Blanca (Naya Rivera) continued to try and get to the bottom of what actually happened the night Taylor (Brianna Brown) claimed a burglar broke into their home. During the night Katie (Grecia Merino) started screaming leading Blanca to tell Taylor about the paintings. Taylor tried to brush them off and Blanca started to suspect that Katy may have killed Michael (Brett Cullen).

After being shut down by Taylor, Blanca appealed to Katy to tell her what happened and why she painted the pictures. It took a bit of coaxing but Katy eventually revealed that the picture she painted was of her dad giving Blanca more evidence that Michael may be dead. Blanca confronted Taylor, who had tried to throw the paintings away, and revealed her theory that Katy killed Michael. Taylor made out that Blanca was sounding crazy and it was revealed that Michael was alive and well (and home). Blanca tried to get Michael on his own to talk to him about Katy but Taylor interrupted them and sent the nosy maid on an errand. Taylor then went somewhere quiet and made a call saying ‘we’ve got a problem’.

As Blanca returned home following Zoila’s cancelled wedding, she was attacked by an intruder and kidnapped. Her bag and pendant dropped to the floor as she was dragged away.

Falling back into bad habits

As Carmen (Roselyn Sanchez) got to grips with her new job at the Powell’s, she was surprised when Sebastian (Gilles Marini) showed up as the couple’s realtor. Evelyn (Rebecca Wisocky) decided to put the house on the market when the recent murder sent tourists to their front door. Sebastian made his intention to restart his affair with Carmen clear and let himself into the house now he has a key to the house. Carmen gave in and the two were about to have sex when the Powells returned home and Adrian (Tom Irwin) almost caught them. Carmen slammed the door in his face and refused to let him in so that she didn’t get caught. She accidentally trapped his hand in the door, which he rather enjoyed given his recent discovery that pain is a turn on. Adrian then treated Carmen as his dominatrix getting his turn on without her realising what he was doing.

Marisol’s (Ana Ortiz) maid service hit a snag when her customer Gail (Julie Claire) expressed dissatisfaction over the chatty maid she’d been sent. Trying to iron things out, Marisol offered to speak with the maid but Gail insisted on having a different one sent to her house. Gail promptly sacked the maid leaving Marisol to find someone else for her. Marisol was surprised when Jesse (Nathan Owens) applied for the position and told him that she only placed women. Jesse told her she was being sexist and Marisol responded angrily asking him to leave. Jesse caught the outgoing maid and found out Gail’s details.

Marisol received a call from Gail thanking her for the new maid she’d sent over. Confused Marisol headed over there and confronted Jesse about pretending to work for her but was left unable to do much when Gail revealed she was about to bad mouth Marisol’s new business due to the experience she had had prior to Jesse. Back at her house, Marisol told Jesse he was fired leading to a heated argument. Jesse revealed that he wanted to be a maid because he had served in the army and he wanted to try and forget what he’d been through. Marisol agreed to give him another chance.