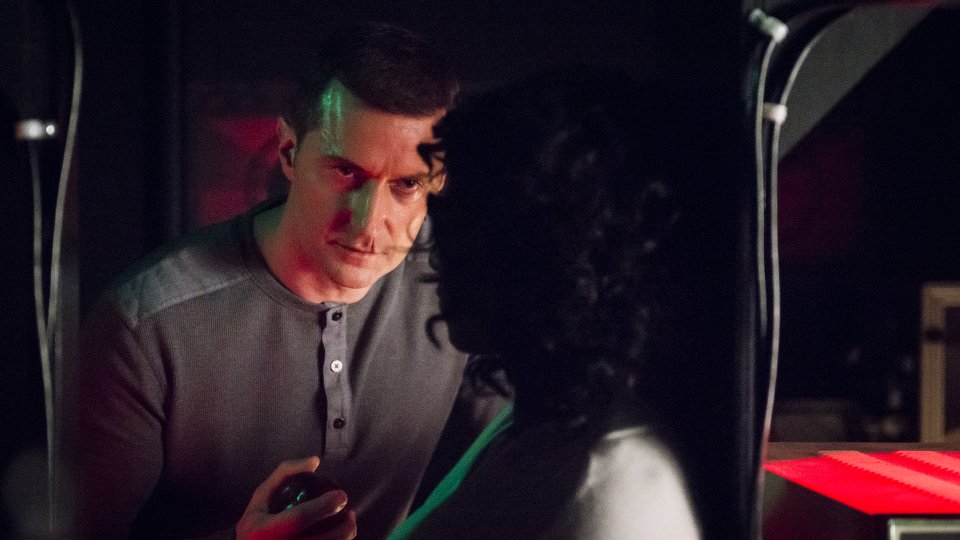 If you haven’t seen the latest episode of Hannibal and want to avoid spoilers, we suggest you stop reading now. If you want to relive the action then keep reading now.

Through flashback sequences we saw more of Hannibal’s (Mads Mikkelsen) manipulation of Abigail (Kacey Rohl) before her death. The scenes took us back to the first season as we saw Hannibal faking Abigail’s death by draining blood from her arm and making it look like she was killed. Later on Hannibal was seen once again with Abigail but this time in his office. The body of her dead father was seated opposite her as Hannibal encouraged her to cut the dead man’s throat. Abigail obliged of course showing how under Hannibal’s influence she really is.

Where there’s a Will…

Will visited Hannibal for help with his case before visiting one of the crimes scenes. At the scene he was caught by Freddy Lounds (Lara Jean Chorostecki) who had written a piece on Hannibal and Will’s unusual friendship claiming that they were co-conspirators in Hannibal’s murders. Will denied the accusation and berated Freddy for taking photos of him whilst he was recovering in hospital.

Jack (Laurence Fishburne) and Alana (Caroline Dhavernas) continued to be worried about Will’s wellbeing now he’s back working with the FBI. Alana reminded Hannibal that if he doesn’t keep up his end of the bargain and leave Will alone, she would take away all of his perks and make him suffer.

Francis finally spoke this week but not before more body contortion and imagining that he had a dragon’s tail. He met potential love interest Reba McClane (Rutina Wesley), a blind film lab worker, who promised to help him get and develop film. The two bumped into each other again as Francis left the lab and offered Reba a lift. She accepted and the two shared a very awkward conversation where Francis ate a piece of pie and struggled to control himself when Reba asked to touch his face. Is this going to end with Reba dead?

At the end of the episode Francis made contact with Hannibal…

Alana revealed that was still in a relationship with Margot (Katharine Isabelle) and that she carried Mason’s (Joe Anderson) baby. She made the admission during a conversation with Will and confirmed that she’d finally helped Margot realise her dream of having a baby, and getting on over on her repulsive late brother.

Tune in to Sky Living HD at 10pm on Wednesday to see the next episode. Preview And The Woman Clothed In Sun below: