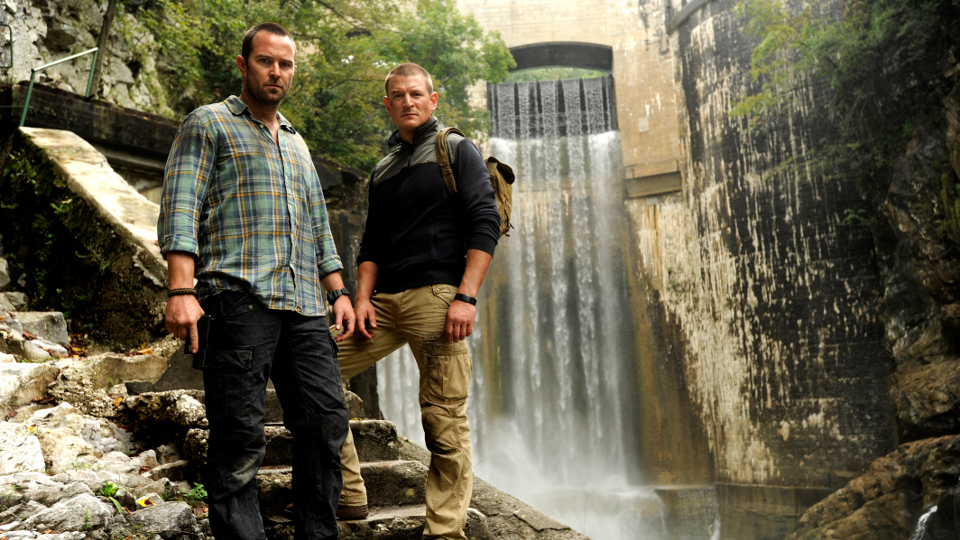 The tenth and final episode of Strike Back: Legacy is currently planned as the last ever Strike Back episode.

Episode 10 begins straight after the helicopter crash at the end of episode 9. Stonebridge is lying on his back covered in blood but he’s alive.

There’s bits of burning helicopter all around him and he calls out for Scott. He’s close by and looking in slightly better shape.

They have no choice but to leave Locke’s body in the burning chopper as the mercs will be after them.

Stonebridge has lost his gun but Scott still has his, however he only has 3 bullets left! Scott wants to get even but Stonebridge says they need to get smart first.

Mason and Faber are seen heading to the crash site with a whole group of mercs. They are armed to the teeth.

As the boys make their way away from the crash site they have a brief argument, obviously both upset at the death of Locke.

Back at the crash site the mercs look for clues as to where they have gone and take a look at Locke’s body.

Scott and Stonebridge come across an Austrian farmer called Oscar and ask to borrow his telephone. He agrees and takes them inside, he’s ex-forces himself.

Scott makes a call to someone and says that he needs their help. He then tells Stonebridge who he called, it’s his old CIA handler, Christy Bryant, who was last seen in Season 3 Episode 10.

They chat to Oscar and ask for the location of a dam before he agrees to let them stay to rest.

As night falls the mercs are closing in on them. Scott sleeps and Stonebridge has a drink and another chat with Oscar. He talks about being a soldier and also his wife who was tragically killed in Season 3 by Craig Hanson.

Scott wakes up and joins them for a drink. He proposes a toast to Locke and they decide to leave at first light.

Before they leave he gives them an old stick grenade that belonged to his father and a motorbike and sidecar.

The mercs arrive at Oscar’s house and ask the whereabouts of Scott and Stonebridge. He says he’s seen no one but they spot the 3 glasses on his table.

He refuses to help them and they torture him.

Meanwhile Scott and Stonebridge arrive at the dam and begin to prepare for the mercs assault.

Scott gets to work on opening a hatch that Christy told him about that contains guns. As he’s trying to gain access the mercs arrive. He finally gets it open but it’s empty!

Stonebridge has a plan to run at the enemy firing but when they play it out in their heads they realise they’ll get shot to pieces.

Instead they go with Scott’s plan which is to hide in the hatch and use the grenade. They do this and manage to take out some of the enemy as the mercs launch a full assault.

This allows them to get their hands on a couple of weapons. As they return fire a grenade is tossed at them and they can only escape by jumping off the dam!

The mercs shoot after them into the water, Stonebridge is ok but Scott is hit in the stomach.

Stonebridge gives him a pep talk and then leaves him behind while he checks on the mercs.

He comes across one of them and is about to take him out with his combat knife but is spotted by another. As he drops his knife he attacks the pair of them. He takes a bit of a beating before breaking one of their necks and shooting the other.

Meanwhile a merc arrives at where Scott was left bleeding but he’s nowhere to be seen. As he surveys the area he moves near the water, Scott pops up and stabs him with a stick in the neck before pulling him in. They fight and Scott gets the upper hand smashing his head in with a rock.

Stonebridge returns to find Scott still in the water trapped under the merc and pulls him out. Scott is in a really bad way and has a vision of Richmond.

It all goes dark before he wakes up in bed with Christy and Stonebridge by his side. She’s taken the bullet out of him and patched him up.

Stonebridge says they will leave at dark and leaves Scott and Christy to catch up.

Scott heals fast and is up to his usual tricks in no time as he sleeps with Christy.

Stonebridge goes outside to play soldier for a bit.

Night time arrives and Stonebridge comes across a wolf as he’s on patrol.

Scott realises that Christy has played them and she owns up to being offered a lot of money. A shot is fired and a bullet comes through the window and kills her.

The mercs are preparing an assault and the boys are still low on supplies.

Stonebridge tells Scott to wait and as the mercs attack they come across booby traps that Stonebridge has set.

The mercs open fire and the boys take cover inside while trying their best to return fire.

One merc manages to get close and drops a flashbang into the room where they are which explodes and disorientates them.

The mercs then start coming inside and there is plenty of gunfire and melee combat.

Stonebridge gets a knife through the hand which Scott removes and Scott takes a bullet to his leg.

They make a run for it to the garage and find a car but it’s useless. So they take a few mins to patch themselves up.

Faber comes unarmed to talk and tells them he’ll let them go for $2million each to which they laugh as they don’t have the money.

Stonebridge shoots him dead and all hell breaks loose. Bullets fly, everything explodes and they kill all the mercs.

The action switches back to London as Stonebridge walks into a surprised Charles’s office and drops the dog tags of his falled comrades on his desk.

Charles tries to worm his way out by blaming other people but Stonebridge promises to kill him.

We then see Stonebridge zipping along on a motorbike and he pulls up next to Scott’s son Finn. He tells him it’s official that Scott is dead before Scott pops up from behind his bike. He’s off on a road trip with Finn.

Scott and Stonebridge go for one last fist bump and then drive off in different directions. The episode and show ends as Stonebridge comes back and they all drive off together.

It’s a great end to a fantastic show and we’re definitely going to miss it.

Let us know your thoughts on the Strike Back: Legacy finale in the comments below.

Strike Back: Legacy begins in the US on July 31st on Cinemax and is known there as Strike Back Series 4.