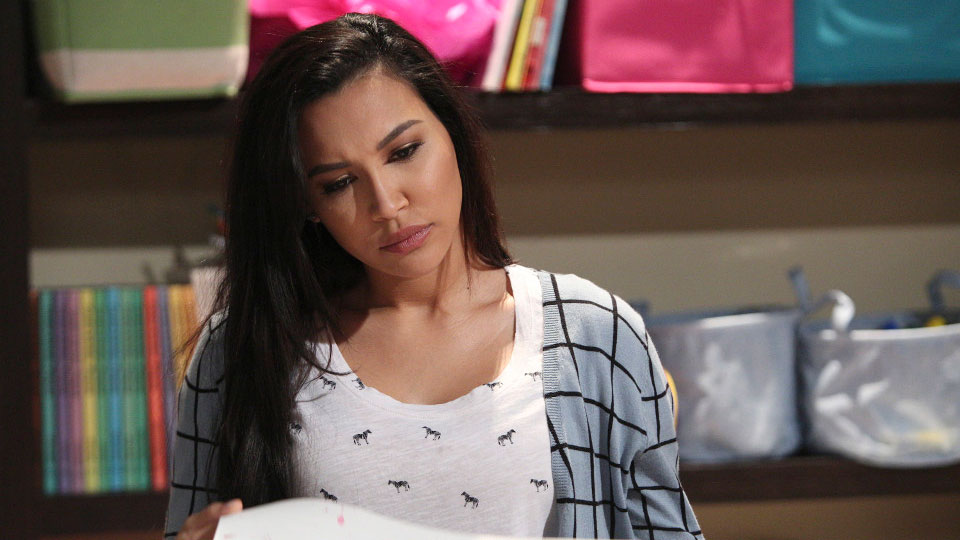 This season’s murder mystery got even more intriguing this week on Devious Maids.

If you haven’t seen the latest episode of Devious Maids and don’t want any spoilers, we suggest you stop reading now. If you have seen it and want to relive the action then keep reading.

There’s been a murder!

Blanca (Naya Rivera) found herself in a very difficult situation in the aftermath of the bloody discovery in the Stappord house. Taylor (Brianna Brown) begged her new maid to keep things quiet and Blanca agreed to clean-up and help her. When trying to find out what had happened, Blanca was told by Taylor that a burglar was interrupted and that Taylor had stabbed him before he got away. Blanca blindly believed her employer and was told the reason the police couldn’t be involved is because they would find out that Katy’s (Grecia Merino) adoption wasn’t legal. That story was called into question later when Blanca overheard the police informing Taylor that a leg had been found at the Powell’s.

Scared, Blanca started packing up her things and refused to stay despite Taylor begging her. Taylor admitted that the ‘burglar’ had been killed but she wouldn’t tell her any more. Blanca left the house and went to see Marisol (Ana Ortiz) about getting another job. Marisol, who herself had seen Taylor earlier when looking for an AWOL Michael (Brett Cullen), told Blanca that she should use her position to ask for more if too much was being asked of her.

Taking that advice to heart Blanca went back to the Stappord house and essentially blackmailed Taylor to pay her college tuition in exchange for her silence. Taylor agreed and as Blanca got back to work she was shocked by the violent paintings in Katy’s bedroom of a man who had been stabbed.

Marisol announced to her friends, with a little help from Carmen (Roselyn Sanchez) that she was starting up her own business; finding placements for maids. In no time at all Marisol had her first client, which got Carmen pleading for her to help find work. Of course Carmen being Carmen, she made her list of demands known pushing Marisol into a difficult situation.

Over the course of the episode Carmen became increasingly frustrated with Marisol’s seeming refusal to help her, particularly after she roped in a nurse at the hospital to call Marisol that confirmed she wasn’t at the top of her friend’s priorities. Marisol tried to placate Carmen by telling her that work isn’t easy to come by but was promptly shown up to be lying when one of her clients showed up on the doorstep celebrating her new job.

Marisol realised that Carmen was the one behind the odd call she’d received and she dished out a plate of cold hard truth to her friend. Carmen decided she was living with Marisol until she was given a job and when the Powells called asking for a new maid to replace Valentina (Edy Ganem), Marisol seized the opportunity to put Carmen to work.

Man of the house

Rosie (Dania Ramirez) prepared to leave the hospital and go home but was alarmed when she noticed how messy Spence’s (Grant Show) apartment was during a video call with her son. She read Spence the riot act and told him that she was now his wife, not his maid, and that he had to clean up the apartment himself before she arrived home. With the intention of at least trying to do it, Spence betrayed Rosie by taking advantage of Zoila (Judy Reyes) and Carmen when they showed up bearing food for Rosie’s return. Spence turned on the waterworks and the women felt sorry for him, so they cleaned up the apartment.

When Rosie returned home she was suspicious about how clean the apartment was and Spence was rumbled when her son told her that Zoila and Carmen had been in the apartment. Rosie laid into Spence but when she brought up her dead husband Ernesto (Cristian de la Fuente), Spence lost his temper.

We wonder how Spence and Rosie will feel when they learn that Ernesto is alive and well. Oh and he’s on his way to see Rosie…

Remi (Drew Van Acker) was accepted into school in New York and asked Valentina to move with him. She was a little bit shocked by the invitation but even more shocked when Remi proposed and suggested that they get married as soon as possible. After saying yes, Valentina went to tell Zoila the news and didn’t get the reaction she expected. Zoila forbid her from marrying Remi and failed to mention that she was pregnant.

During dinner with Javier (Ivan Hernandez), Zoila spouted off about Valentina and marriage causing her beau to panic as he was planning to propose. He decided to go through with it and Zoila accepted but realised that it put her in a tough situation with Valentina. In an attempt to smooth things over Zoila invited Valentina over and gave her blessing for Valentina to marry Remi. She then told her daughter that she too was getting married and she was pregnant. Valentina reacted badly, feeling that Zoila had been unfair to her and violated the values she’d raised her to believe in.

After a conversation with Remi, Valentina went back to see Zoila and the two repaired their relationship. They were both feeling upset that each other was embarking on a new life that didn’t involve them. Valentina then asked Remi if they could wait to marry and told him that she didn’t want to wait any longer to sleep with him. She also handed her notice in to the Powells.

Following the discovery of the leg in their garden, Evelyn (Rebecca Wisocky) called the police. She was questioned along with Adrian (Tom Irwin) who awkwardly had to admit that he’d been at a sex club. He spent much of the episode in Evelyn’s bad books until he convinced her to go to the club with him. Nervous Evelyn tried to hide her identity but Adrian convinced her to loosen up. As the two started playing with horse crops, a friend of Evelyn’s recognised her causing Evelyn to flee the club.