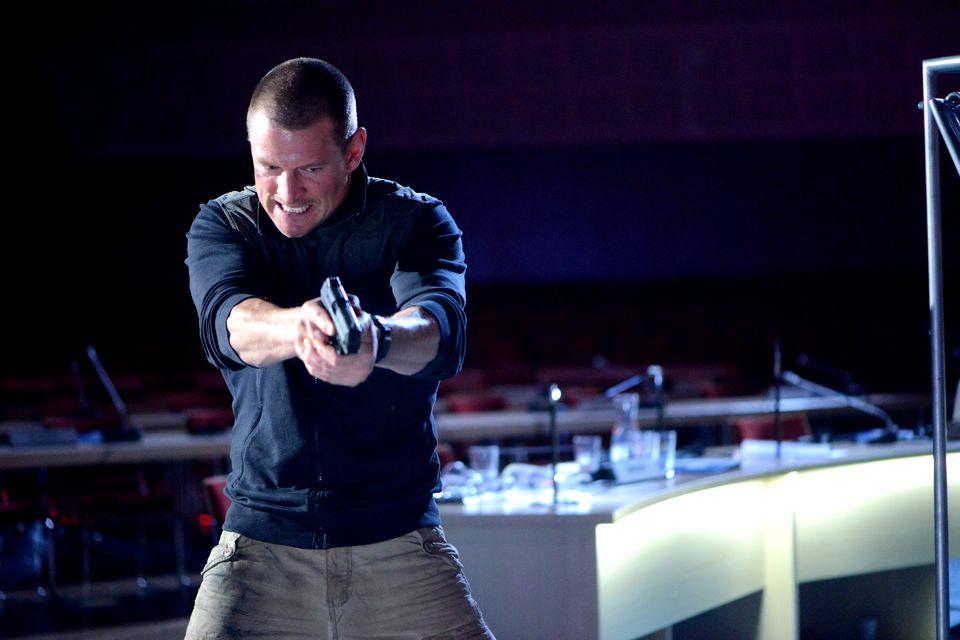 The ninth episode of Strike Back: Legacy saw Scott and Stonebridge finally catch up with Li-Na.

At the end of Episode 8 Scott (Sullivan Stapleton) and Stonebridge (Philip Winchester) were trapped under fire and had to watch helplessly as Kwon stole the nuclear material back from them.

Episode 9 begins after the United Nations in Geneva has been attacked. All security staff appear dead and the council are being held hostage at gunpoint. Li-Na (Michelle Yeoh) gives speech to try and justify her actions against the West as police cordon the building off and surround it. Locke (Robson Green) is outside the building.

Li-Na has her nuclear bomb with her inside the the UN. Stonebridge has been captured and a girl says that Scott is dead! Li-Na apologises to Stonebridge as Kwon makes him kneel and points a gun at his head. The opening credits roll.

The action shifts to 12 hours earlier as Locke tries to convince Charles at Whitehall of Li-Na’s intentions. He doesn’t believe Locke and orders him to return to London as they are disbanding Section 20.

Locke tells the boys and they convince him to disobey the order. They decide to go to Geneva to try and stop Li-Na. One last mission!

They believe Li-Na’s target will be the Nuclear Disarmament Conference at the United Nations. Locke runs ops as the boys pose as tourists to scout the location.

Inside Scott distracts a female staff member by flirting and steals her security pass. Locke means business and orders a cup of tea. Very British.

Security spot the boys on CCTV and identify them via facial recognition in a matter of seconds. They take them in for questioning but don’t believe their claims.

Meanwhile head of security gets to work on murdering his staff. He’s obviously helping Li-Na and starts putting the rest of her plan in motion.

As he cuts the lights Stonebridge appeals to be let free. Li-Na’s men arrive on the scene heavily armed and wearing gas masks. They make their way through the building shooting all that get in their way.

Panic sets in and people start evacuating and those outside, including Locke, are moved away from the building. Inside Stonebridge still has his hands bound but takes out one of the attackers before freeing himself. Scott is locked in a room but manages to climb into the roof space.

Stonebridge arms himself before hearing a loud noise which is Scott falling through the ceiling. He conveniently lands next to him and grabs a gun too.

The terrorists take the main chamber and hold the council members at gunpoint. Li-Na and Kwon then enter the room also armed. She lets some of the hostages go and the building is locked down. Moments later the nuke is brought into the room.

Scott and Stonebridge stealth their way through the building while Locke reports to the military outside. They refuse to go in while there are hostages.

The boys are spotted and forced to run while exchanging gunfire. Scott finds time to rescue the girl he stole the security card from.

Kwon goes to the security room and unlocks certain doors to guide the boys to where he wants them and has them locked in.

As Kwon and his men close in on their position Stonebridge realises that they have been led into a trap. Scott finds an electrical panel and disconnects the wires to try and shut the cameras down.

Stonebridge find a vent and kicks it in before following Scott and the girl through it just as Kwon arrives. Kwon reports in to Li-Na that they have escaped and she tells him to get back to her.

Scott finds a lift and manages to force the doors open to access the shaft, it might be their only way to get to the council chamber.

They try to get the girl to go and hide but she insists on going with them. They climb into the lift shaft and begin to climb confident that the lifts have been disabled.

As they begin the difficult climb a lift below them begins to move and catch them up. Inside are Kwon and his men.

They decide to carefully step down onto the top of the lift as inside Kwon gets suspicious.

After Kwon departs and the lift heads back down they all climb back off and exit the shaft on a floor above when Kwon got off.

Back in the chamber Li-Na executes an American who interrupts her. She then orders the bomb be armed and the cameras turned on. The bomb timer begins counting down from 10 minutes.

Li-Na begins her speech which we saw a snippet of at the beginning of the episode.

As Scott and Stonebridge get ready to try and stop Li-Na the girl pulls a gun on them, she’s also a sleeper agent for the North Koreans. Scott manages to talk her down.

Outside the military finally admit to Locke that they made the wrong call not going in earlier.

To get in the council chamber the girl takes Stonebridge in at gunpoint, this is the snippet we saw at the start of the episode but it makes more sense now.

She tells Li-Na that Scott is dead but we know he isn’t, as Stonebridge kneels and Kwon goes to execute him Scott opens fire from above.

Stonebridge makes his move and in seconds they have killed a whole pile of the enemy. Kwon and Li-Na manage to get out of the way for now.

Scott rappels down to join Stonebridge and they continue their assault. Kwon takes a bullet and goes down while Stonebridge captures Li-Na.

The girl takes the hostages to safety while the boys try and get the deactivation codes from Li-Na. There’s less than six minutes left on the clock!

Scott takes a look at the device. Li-Na refuses to tell them the codes so Stonebridge puts another couple of bullets in Kwon.

Li-Na appears to crack seeing her love in pain and gives them a code which Scott punches in but it’s the wrong one and the countdown drops to 2 minutes!

She’s willing to die and it appears so is Kwon as he pulls a knife out and plunges it into his own throat before bleeding out.

To Stonebridge’s dismay Scott decides to give a mate of his a call with just a minute left. At first his mate think’s he’s joking but Scott gives him more info about the nuke.

He makes a quick sketch and changes his mind a few times on which wire to cut. He finally settles on the red wire. With seconds left Scott decides to go for the blue wire instead.

He snips the wire and the countdown stops with just 2 seconds on the clock. Phew!

As they leave with Li-Na they are stopped by soldiers who demand they drop their weapons and hand Li-Na over.

Outside Locke argues with the military about who should have Li-Na before disobeying their orders and going inside himself.

As the boys debate if they should hand her over a jeep comes speeding through the building and the soldiers scatter. It’s Locke!

They jump inside with Li-Na and speed out, smashing through a glass door on the way.

As they escort Li-Na she is confronted by Scott about Richmond’s last words which she tells him.

Locke speaks to Charles and he confirms they have Li-Na. He promises that is they bring her in that he will reopen Section 20 and admits he was wrong.

They arrive with Li-Na at the exfiltration site to find the mercenaries Mason and Faber waiting along with Charles.

Locke says that he is done after the exchange. As they approach Charles, Li-Na tells them that something is wrong.

They hand Li-Na over and Locke tells Charles that they are done. Mason and Faber escort Li-Na away but suddenly knock her to the floor and shoot her.

Scott and Stonebridge draw their weapons as Charles fires several bullets right into the chest of Locke!

Charles escapes with the mercs as Scott and Stonebridge open fire. Scott grabs Locke and they make a dash for their car.

They come under heavy resistance and Scott decides they will leave by helicopter instead. As a distraction they blow up the car.

Locke is hard as nails and despite his injuries he manages to raise his gun and shoot a couple of enemies on the way to the chopper.

As Scott takes off the chopper takes heavy fire and is damaged but they get away. We see Li-Na lying in a pool of blood presumably dead.

Stonebridge tries to tend to Locke who is in really bad shape. As he takes his last breath he tells Stonebridge – ‘It’s ok Michael’.

As Stonebridge rages as the loss of their boss the chopper begins to lose altitude and they crash hard into trees.

Strike Back: Legacy begins in the US on July 31st on Cinemax and is known as Strike Back Series 4.