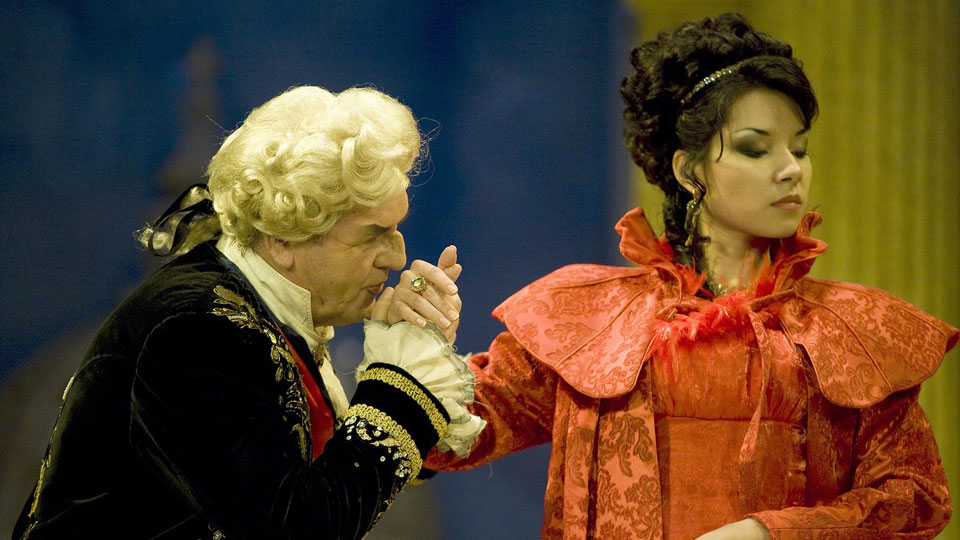 Having been producing highly acclaimed operas for the past 24 years, Kent returns for a sensational new season and countrywide tour with over 90 dates confirmed. Her productions are renowned for their high production values, stunning set design which truly capture the architectural backdrop of each of the beautiful cityscapes, lavish costumes and incredible pyrotechnic displays and lighting effects which all combine to deliver an exceptional visual and musical masterpiece for audiences.

Carmen is the story of the bewitching gypsy girl whose tantalising beauty lures a soldier to desertion and leads to her own murder. Stunning international Bulgarian mezzo-soprano Nadezhda Stoianova who received critical acclaim for performances of Carmen in 2013 and Aida in 2014, together with Liza Kadelnik will sing the title role of Carmen. The role of Michaela will be sang by Maria Tonina who returns after spectacular success in Traviata and Rigoletto and Alyona Kistenyova who gained rapturous reviews from her debut as Madama Butterfly earlier this year. Iurie Gisca returns to the role of Escamillo after playing to excellent reviews in 2013.

The opera includes some of the most evocative and best-loved melodies in opera – The Habanera, The Seguidilla, The Flower Song, The Chanson Bohème and perhaps the best-known baritone aria of all The Toreador’s Song. With a brand new set which reflects the stunning architecture of Seville and its main square with Roman and Moorish influences.

Carmen also features a spectacular dance sequence by Caspian the stallion, ridden by Joe Butcher from AB Films and the special guest star, a donkey. Ellen’s mother ran the Spanish equivalent of the RSPCA which saved the lives of many donkeys and to continue this good work Ellen has included a donkey from various sanctuaries to help them raise money.

Set to Strauss’ mesmerising and fanciful score, reminiscent of his ever popular and lively Viennese Waltz style of music, Die Fledermaus tells a tale of fun and frivolity; of love triangles and revenge revolving around Baron Von Eisenstein and his friend Dr. Faulk who takes an opportunity to exact his revenge on the Baron for a trick played on him at a costumed ball the previous year. A stormy operetta full of jest and intrigue commences and the tale concludes where the operetta started – in the Vienna prison.

With lavish and opulent costumes and sets based on 19th Century Vienna, this joyful operetta gives an intriguing insight into the society life in Vienna of the time and includes the famous arias Come With Me to the Supper, Happy Is He Who Forgets and Oh Bat, Oh Bat At Last Let Thy Victim Escape.

Puccini’s Tosca is an epic tale of true love and treachery featuring torture, murder and suicide alongside some of opera’s best-known music. Vladimir Dragos returns to sing his most famous role of Scarpia after his acclaimed portrayal of Rigoletto on Ellen Kent’s last tour. Maria Tonina and Alyona Kistenyova will be singing Floria Tosca.

Set in Rome and based on a play by Victorian Sardou, it was once described as a “shabby little shocker”. Opera diva Floria Tosca fears for the fidelity of her lover Mario, only to discover that it is the Baron Scarpia’s lust for her that endangers that love. A complex agreement of bargains and bluffs follow, to the detriment of all, with a truly tragic ending.

In preparation for the current tour and her new staging of Tosca, Ellen took a trip to Puccini’s house in Italy.

Ellen said: “It was quite magical. I didn’t think it would be quite so inspiring. It was almost eerie – exactly as you would imagine Puccini to have created, with beautiful memorabilia everywhere. There were his shoes and clothes and pipes and all the models of his operas and his actual scores with all his notes on them. My productions are always rather beautiful and I suddenly realised that in my view, I have been doing what Puccini would have liked and wanted. It felt like meeting somebody I knew.”