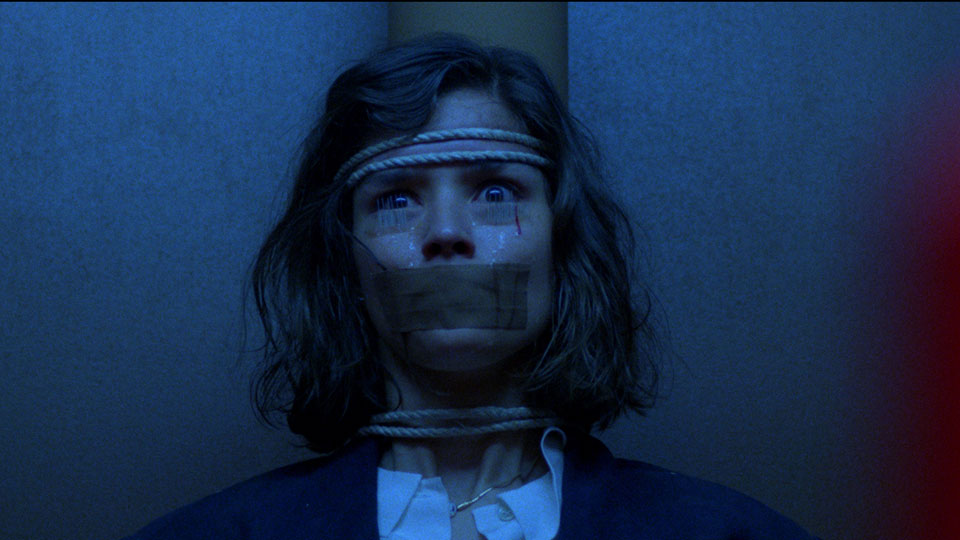 Young opera singer Betty (Cristina Marsillach) finds herself taking the lead in a production of Verdi’s Macbeth when the demanding leading lady is involved in an accident. Stepping into the role of Lady Macbeth, Betty is a hit with audiences but she soon discovers that someone is stalking her and killing the people around her. Following a frightening experience of being made to watch the killer’s latest murder, Betty has to try and find out who the masked killer is before she loses her own life.

Arriving in the late 80s, Opera is one of giallo master Argento’s films that has been hard to find up until now. Often overshadowed by the likes of Suspiria, Phenomena and Tenebrae, Opera has been given its debut Blu-ray release in a Dual Edition package by CultFilms. The print has been given a 2k scan and it was restored and regraded with the involvement of Argento. Visually the film looks magnificent with the new restoration really bringing to life the vivid colour palette that’s at the heart of all of Argento’s films. The picture is sharp and crisp, with the audio sounding a lot cleaner and of a high quality.

Opera is at its heart a classic Argento giallo. The set-up is revealed quickly and the murders are as shocking and gruesome as you would expect from the horror maestro. In parts it’s much less subtle that some of Argento’s earlier films but the director showcases his knack for being innovative and original. The cover art for the release features a close-up of an eye with pins sellotaped to the bottom eye-lid, capturing one of the film’s most horrific and shocking recurring moments.

As far as the story goes, it’s fairly straightforward. Opera is a whodunit that introduces a variety of characters/suspects and leaves you guessing throughout. The murder sequences hold up well and some of them are actually fairly shocking. That Betty is forced to watch them, makes it all the more uncomfortable. There’s one particular murder that involves a bullet through a door that looks incredibly impressive and once again showcases Argento’s ability to wow the audience.

Where Opera struggles a bit, as with most Argento films, is that the dubbing is distracting. Most of the actors are dubbed to give a consistent accent and tone across the cast, and that takes a little bit of getting used to. Often characters mouths aren’t moving yet words are flowing out or they’re lips are still opening and closing but the dialogue has finished. There’s a little bit of over-the-top voice acting too, which unintentionally makes some deaths quite funny.

Marsillach is solid enough as the heroine Betty, who was rumoured to have a difficult relationship with Argento, but it’s Ian Charleson, in his last role, and Urbano Barberini that put in the best performances as director Marco and Inspector Alan Santini respectively. Argento’s former wife Daria Nicolodi pops up in a small role, despite the two being in the midst of ending their marriage at the time of filming.

Special features on the release include Aria of Fear, a new interview with Argento, a 40-minute period documentary showing the making of the film titled Opera Backstage, and a featurette on the impressive restoration process.

Opera isn’t one of Argento’s best films but it’s a worthy addition to your collection If you’re a fan of the film-maker. This release by CultFilms has obviously been put together with a lot of care and attention. The quality of the print is top notch and the added extras make the package worthwhile. Better than many of the films that came after it but never reaching the highs of those that came before, Opera is a slick, visually impressive murder mystery with plenty of gore and twists to keep you hooked.