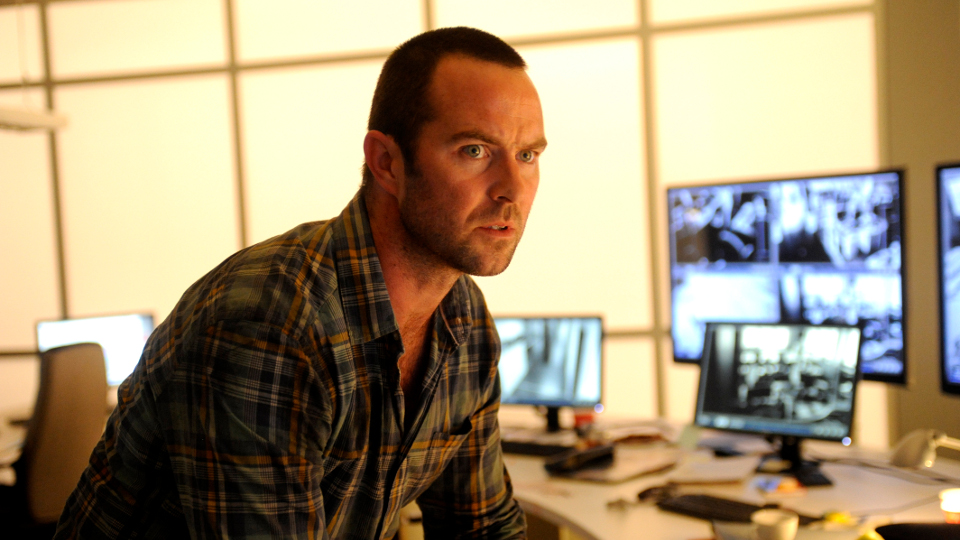 The eighth episode of Strike Back: Legacy continued the hunt for Li-Na as she prepared to execute her plans.

At the end of Episode 7 Li-Na (Michelle Yeoh) and Kwon escaped the bank they raided with a mysterious journal that we’re sure has something to do with her nuclear ambitions. Scott (Sullivan Stapleton) and Stonebridge (Philip Winchester) were just a little too late to stop them. Elsewhere Locke (Robson Green) was trying to hunt down Oppenheimer – the bomber who killed his son.

Episode 8 begins as Li-Na and Kwon escape into a secret underground car park. Scott and Stonebridge get to work on accessing the vault room and as there’s no way way to open the secure doors they blast their way in.

As they make their way down Li-Na and Kwon escape by car along with Myshkin and Nina. The boys come up against resistance but quickly take them out. They then give chase using a couple of motorbikes that are conveniently waiting for them.

They soon catch the vehicles and Myshkin’s car crashes. Nina wastes no time in attacking him. While Scott tries to help her Stonebridge goes after Li-Na and Kwon. Nina tells Scott to go and he catches up with Stonebridge to find he’s been stopped by the police and Li-Na has escaped.

They try to explain but the police are heavy handed with them. They think they have caught the guys who robbed the bank. In the blink of an eye the duo overpower the six police officers and cuff them up. They then make off with one of their squad cars and weapons to rendezvous with Locke and Nina.

They have Myshkin tied up in a car boot and he tells them about the notebook that Li-Na stole from the bank. He also gives them info on a guy that she needs to crack the codes in the book. He appeals to be let free but they let Nina keep him. She plans to torture him for a while before handing him over to the FSB.

Li-Na goes to see the progress that Oppenheimer is making on the bomb he is building for her. He talks about Locke and asks about the final vital component he needs to finish his creation. Li-Na promises that she will have it soon.

Scott and Stonebridge arrive at the hotel where the guy they seek is staying. Locke is running ops and advises caution but he’s also still distracted by Oppenheimer.

They enter the hotel and inside the guy is working on breaking the codes. The boys take out a chap guarding the room before knocking on the door. They then burst in and end a short fight with lots of shooting.

They secure the room as more bad guys arrive. Trapped they decide to escape out the window with the code cracking guy, Matthias. He’s afraid of heights but after a little encouragement they find a way down to their police car and escape.

Matthias says he had managed to break a quarter of the codes which were in Korean. He’s sent them to Li-Na already and Stonebridge tells him they need him to decipher the rest for them.

Kwon arrives at the hotel and reports back to Li-Na. She says they have the code she needs for now. Kwon promises to get Matthias back so they can get the rest.

Li-Na makes a call to another agent at a nuclear research facility. It looks like something big is about to go down.

While Matthias gets on with solving the rest Locke discovers the first three were a list of names. Presumably they are sleeper agents for Office 39 – this includes the one Li-Na contacted at the nuclear research facility.

Matthias says he needs the bathroom and takes flight while Scott and Stonebridge chat about Finn. They realise he has run and go after him. When they catch up with him he refuses to go back inside.

Scott shoots him in the leg to prove they are serious. Suddenly Kwon appears in a car and shoots at them before escaping with Matthias. They try to pursue but discover that Matthias has let the air out of their tyres.

Kwon gets the names he needs from Matthias then shoots him dead. Elsewhere Locke picks Scott and Stonebridge up. He updates them on the names they uncovered including the guy who works at the nuclear research facility.

At the nuclear research facility they are getting ready to transport some nuclear material. Doing so requires lots of security protocols but the sleeper agent is a senior staff member and able to get all the information which he passes to Li-Na about how it will be transported.

The convoy leaves the research facility with the sleeper agent onboard. Locke uncovers details of the convoy and tasks Scott and Stonebridge with intercepting it. He thinks he has a location on Oppenheimer and is off to investigate.

The convoy soon comes under attack by Kwon and his men who make short work of the security detail. Kwon removes an eyeball from one of the scientists which he needs to get past the retinal security. Before they can leave Scott and Stonebridge arrive on the scene guns blazing and steal the armored transport truck.

Locke arrives alone at the location where he suspects Oppenheimer is creating the bomb. We get to see him in action as he stealths his way inside and it’s not long until he has Li-Na and Oppenheimer in his sights.

Li-Na appears to be leaving with her new bomb and should be the primary target. However Locke is torn between pursuing her and confronting Oppenheimer. Ignoring his mission he decides to deal with Oppenheimer first as he may not get another chance as good as this one.

Finally he gets to confront the main he believes killed his son. Before he kills him he wants him to admit to what he did. Oppenheimer tells Locke that he is asking all the wrong questions. When pushed he says he was ordered by the British to kill Locke to keep his cover intact. Locke doesn’t believe him and is distracted by one of his guards.

Locke kills them before chasing after Oppenheimer and putting a bullet in his leg. He pushes him further to try and find out who ordered his murder. Oppenheimer resorts to mind games while Locke goes crazy and executes him with a bullet through the head.

As Kwon and his men escape, Scott and Stonebridge run from the truck it explodes in a fireball. They head back to Locke and determine that Li-Na intends to detonate the bomb in Geneva at the United Nations.

The official synopsis for Strike Back: Legacy – Episode 9 reads:

[quote]Locke and his team go rogue once more as they defy Whitehall to travel to Geneva, where he is convinced Li-Na and Kwon are preparing to attack the United Nations HQ.[/quote]

The synopsis for Episode 9 seems to confirm that Geneva is indeed the target and it sounds like Locke isn’t prepared to let anything get in their way. We’re expecting a tense and thrilling episode as they try to track down Li-Na, Kwon and the bomb.

Looking at the images below it looks like mercenaries Mason and Faber will be back on the scene too.

Preview Strike Back: Legacy – Episode 9 with our gallery below:

Strike Back: Legacy continues Wednesday July 29th at 9pm on Sky 1 and the series will air in the US on July 31st on Cinemax.