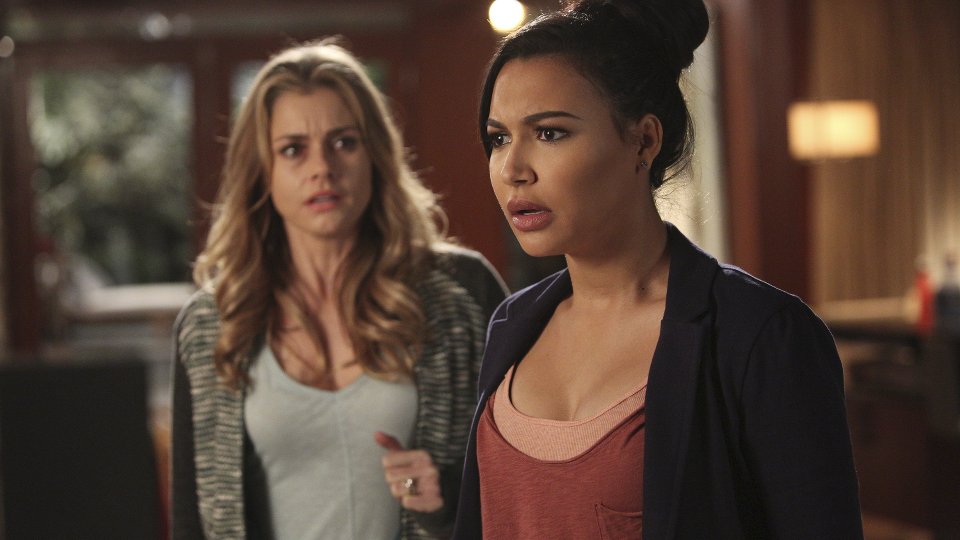 Devious Maids arrived back on our screens in the UK tonight and we’ve already got a pretty big mystery waiting to unfold.

If you haven’t seen the latest episode of Devious Maids and don’t want to read any spoilers, we suggest you stop reading now. If you have seen it and want to relive all of the action then keep reading.

Season 2 finished with an almighty cliffhanger when Ty (Gideon Glick) opened fire at Rosie’s (Dania Ramirez) wedding to Spence (Grant Show) in a bid to kill Valentina (Edy Ganem). After waiting for nearly a year, the show picked up where the second season left off and we found out that Rosie, Pablo (Alex Fernandez) and a priest were all shot. We’ve no idea what happened to the priest but Pablo was killed in the incident.

Rosie survived but spent four months in a coma. When she woke up in hospital she was relieved to see that Spence and her friends were OK. Spence explained that he’d found another job and had to move to a smaller apartment to make ends meet and look after Miguel. Thanks to a big-mouthed nurse (Alec Mapa), Rosie soon discovered that Spence’s new job was a role in a soft-porn movie for cable. After confronting him, she realised he did what he had to do to look after her son.

Girl, you so creepy

Taylor (Briana Brown) and Michael Stappord (Brett Cullen) returned in the season opener with a creepy little girl called Katy (Grecia Merino), who Evelyn (Rebecca Wisocky) found beheading her prized roses. It was clear from the offset there was something off about Katy, who Taylor claimed they had adopted from Argentina with Michael saying she had emotional problems. Once Evelyn left the room both things proved to be lies with the Stappord’s hiding some dark secret.

With the family back in town, they needed a maid and thanks to a recommendation from Marisol (Ana Ortiz) new maid on the block Blanca (Naya Rivera) was given the job. Blanca had been struggling to find a new job that fit in with her studies but Taylor agreed to hire her. On her first day she arrived to Michael shouting at Taylor over some files Katy had ripped up.

Later on the family attended Marisol’s book launch where Katy became interested in a sharp knife on display at the Powell house and cut her finger. Whilst she was marvelling at that (creepy child!!) Michael was telling someone ‘I think tonight’s the night’ after handing over an envelope.

Blanca arrived for work the next day, ready to move into the Stappord house, and became alarmed when she saw a distressed Taylor in the house. Taylor told her there was mess in the living room and not to go in but Blanca had a look and found the room covered in blood.

Meanwhile Evelyn chased a dog away from her roses and fainted when she found a human leg in her garden.

Zoila (Judy Reyes) had kept her pregnancy a secret allowing her friends to believe that she’d put weight on. With Javier (Ivan Hernandez) away on business, Zoila confided in Genevieve (Susan Lucci) and admitted she didn’t know who the father was. When Javier returned, Zoila and Genevieve put a plan in motion to get samples of his hair so she could do a DNA test. The results came back and the baby was Pablo’s not Javier’s. Determined to tell him the truth, despite Genevieve advising her otherwise, Zoila told Javier she was pregnant but didn’t tell him the baby isn’t his.

Carmen (Roselyn Sanchez) continued her affair with married real estate hunk Sebastian (Gilles Marini). She was concerned that he only wanted her for sex and was furious when she discovered the house he’d ‘bought’ for her was actually a listing he was trying to sell. The two had an argument and Sebastian told Carmen he loved her and couldn’t leave his wife because if he did the pre-nup would leave him with nothing. Carmen packed her bags and found herself homeless.

Marisol had become a best-selling author since we last saw her and it seems she forgot who her real friends were in the process. Tensions were present between Marisol and the maids when Rosie woke up, with Carmen teasing her about being best friends with Evelyn. During her book signing at Evelyn’s house, Marisol was appalled at the way her high-class friends were talking about their maids and let rip. That paved the way for her to realise she’d made a huge mistake and she reconciled with Carmen by asking her to move in, and promising to ask her advice for her next business venture.

Spice up your (sex) life

Evelyn and Adrian (Tom Irwin) tried to get their sex life back on track now they knew the truth about their child’s death. The couple went to a therapist to seek help when Adrian failed to perform and were told the lack of conflict may be the cause. Evelyn dressed up as a maid in an attempt to roleplay and Adrian asked her to pretend to be German. It didn’t quite work leaving Evelyn frustrated but Adrian realised he enjoyed being dominated after an exciting encounter with a dominatrix at Marisol’s book launch. His excitement led to him having sex with Evelyn but when he explained why he was turned on after she was furious. Adrian then snuck out and went to a sex parlour to explore his interest in being dominated.

Valentina was feeling a bit stifled by Remi (Drew Van Acker) following the shooting. He had become very overprotective, worrying that someone may try to hurt her again. In a bid to try and protect her, Remi gave Valentine pepper spray, something that quickly backfired when she used it on him thinking she was being stalked during a run. Remi was trying to keep an eye on her without her knowing but Valentina assured him she would be fine.