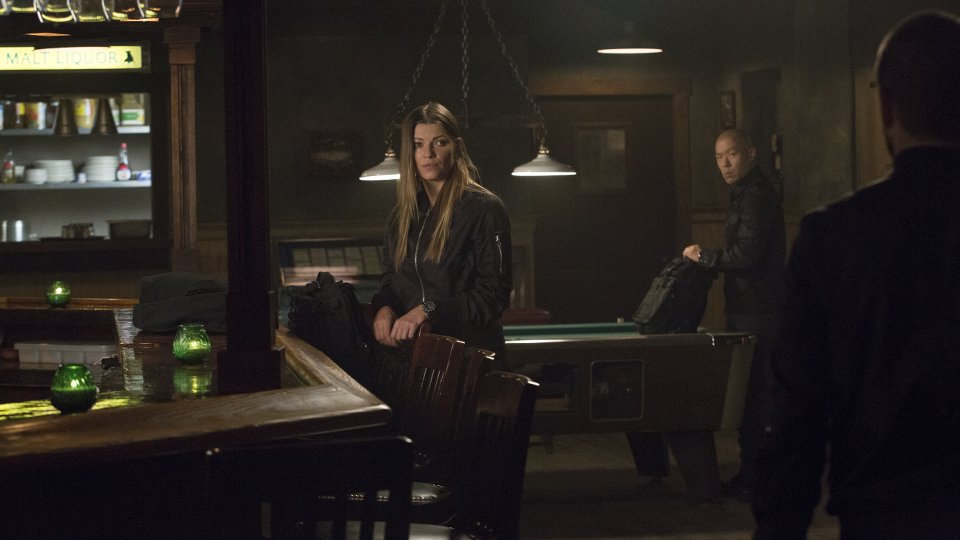 The Camp Genoa heist finally happened but it was far from smooth sailing on Banshee.

If you haven’t seen the latest episode of Banshee and want to avoid spoilers then we suggest you stop reading now. If you want to relive the action then keep reading.

Hood’s (Antony Starr) downward spiral continued this week as he struggled with losing Siobhan (Trieste Kelly Dunn). Taken over by grief and unable to pick himself back up, Hood’s behaviour put the Camp Genoa heist in doubt. He managed to step up to the plate though and along with Carrie (Ivana Milicevic) Sugar (Frankie Faison) and Job (Hoon Lee) they pulled off the heist.

It didn’t go all that smoothly though. With Sugar on surveillance, Hood, Carrie and Job entered the camp through an underground tunnel. They pulled the door off the tunnel and made their way into the camp where Job used his technical know-how to beat the security measures and gain access to the safe. As Carrie worked on opening it, Job went to the computer room where he was attacked. As he called out for help via Sugar, Hood stood in a corridor hallucinating that Siobhan was there. He eventually snapped out of it and came to Job’s rescue just in the nick of time.

Carrie got into the safe and the three of them packed all of the money into their bags. As they were doing that Colonel Stowe (Langley Kirkwood) arrived at the camp and was alarmed when he found out his access codes had been used already. Alerting his men, they stormed the camp but Carrie and Job managed to get away. Hood was left to fight off Stowe and ensure that the bomb in the tunnel detonated. He managed to get away after the explosion and was faced with a miserable heist crew and a very angry Job who almost lost his life thanks to Hood’s issues.

Chayton (Geno Segers) was on the run following his face-off with Hood and the feds last week. He took to hiding in a barn on a farm belonging to widowed lady Lisa Marie (Susan Misner). A bullet in his should didn’t stop Chayton from throwing his weight around and he tried to strangle Lisa, and killed her friendly neighbour, even though she was trying to help him. Lisa told him he could take her late husband’s truck and as the episode was nearing its end Chayton did exactly that but killed Lisa first.

Still smarting from being humiliated by Proctor (Ulrich Thomsen), Rebecca (Lili Simmons) continued to go behind her uncle’s back. This week she negotiated a deal with that violated Proctor’s agreement with his current business associates. Despite appearing ballsy, Rebecca appeared shaken once her side-deal was agreed and the relief poured off her face.

As she was doing that, and we suspect Burton (Matthew Rauch) is on her case, Proctor was trying to re-enter the Amish community and taking life advice from Emily (Tanya Clarke) who told him it was time for Rebecca to move out of the house.

Sleeping with the enemy

Brock (Matt Servitto) spent much of the episode trying to get in touch with Emily but he failed to get hold of her. He eventually did get her on the phone and warned her to stay away from Proctor, a warning she took absolutely no notice of. Instead she told Brock that the two had a ‘connection’.

Deva (Ryann Shane) got a bit of a rude awakening when Carrie and Gordon (Rus Blackwell) turned up at Charlies’ (Jerod Meagher) commune. They’d been tipped off by Deva’s friend, who wasn’t happy about the things she saw including bare knuckling fighting and electrocution. Deva refused to go with her parents, but when Charlie and his friends set on Gordon and Carrie, a big fight broke out. Gordon and Carrie won and took Deva home before they reconnected sexually on the kitchen counter.

Hood told Aimee (Meaghan Rath) that he was going to do what she couldn’t; track down Chayton and kill him. Aimee admitted that she should have shot him but told Hood she couldn’t witness him being murdered. Hood asked Brock to cover for him but Brock refused insisting that he accompanied Hood to New Orleans to take Chayton down.

Banshee continues on Thursday at 10pm on Sky Atlantic HD. Watch the promo for next episode All The Wisdom I Got Left below: