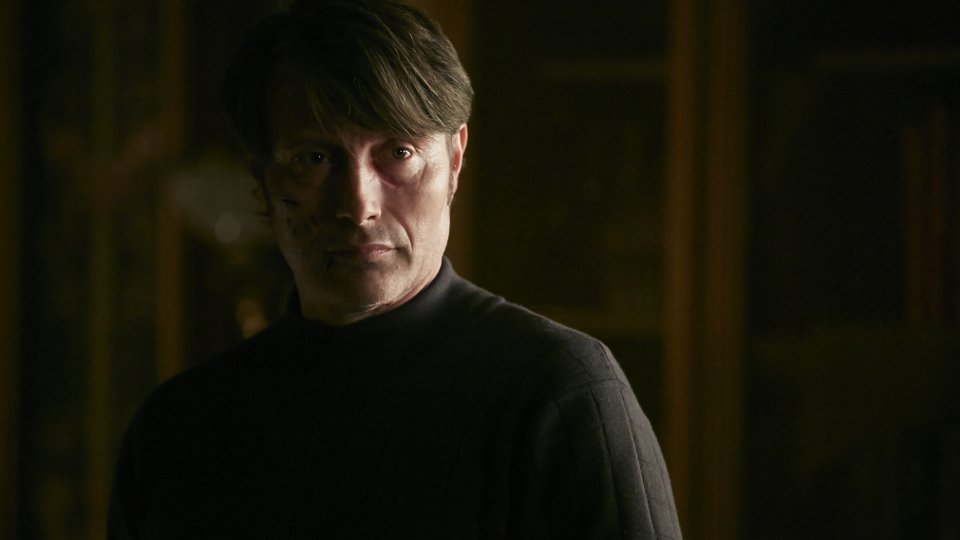 A surprising twist sets up a potential bloodbath in this week’s instalment of Hannibal.

If you haven’t seen the latest episode of Hannibal and don’t want any spoilers we suggest you stop reading now. If you have seen it and want to relive the action then keep reading.

Bedelia (Gillian Anderson) saw an opportunity and ran with it this week following Hannibal’s (Mads Mikkelsen) violent showdown with Jack (Laurence Fishburne). When he returned home bloodied and bruised, Bedelia helped clean up his wounds before packing a bag for him and sending him on his way. Surprisingly he didn’t protest and not even her taunts of him having planned to eat her changed his mind.

Reunited (and it feels so good)

Will (Hugh Dancy) survived his fall from a moving train courtesy of Chiyoh (Tao Okamoto) and arrived in Florence. He met with Jack at the crime scene where Pazzi (Fortunato Cerlino) had been murdered. The two discussed whether or not to inform the police that it was Hannibal they were looking for rather than Dr. Fell but Jack warned that giving them his real identity would scare him away.

The duo located Bedelia who was in a drug-induced haze (more on that later) and Will saw an opportunity to slip out. He found Hannibal and the two walked side-by-side after an intense conversation. Just as Will was about to pull a knife on Hannibal, Chiyoh (who was watching them) shot him in the shoulder. Hannibal took Will to a nearby apartment (that belonged to the late Professor Soliato) and tended to his wound.

Bedelia’s big plan to get away with her part in Hannibal’s murders hit a bit of a snag. She decided to shoot herself up with sedatives, the same ones Hannibal administered to Miriam Lass (Anna Chlumsky), so she could claim he was drugging her and she wasn’t in her right mind. She was disrupted by Chiyoh and the two women quizzed each other before Hannibal’s ‘family’ member did a disappearing act. Bedelia returned to her drugs and was in a dazed state when Jack and Will found her. Jack admitted to being impressed by her efforts to protect herself rather than angry that she hadn’t a) turned Hannibal in or b) tried to kill him.

Following her visit from Jack, Bedelia was visited by the police and found herself talking to a very amenable officer. She turned on her female charm, pretty much promising to do whatever it took to avoid being prosecuted. It’s safe to say she gave up Hannibal’s location to save herself.

Alana (Caroline Dhavernas) teamed up with Margot (Katharine Isabelle) to try and ensure that the Italian police capture Hannibal for Mason (James Anderson) so they can exact their torture and revenge. In a scene that came literally out of nowhere, Alana and Margot took their partnership to a sexual level and enjoyed a kaleidoscopic sex romp. After they’d done the deed, Margot asked Alana if she had an experience harvesting sperm following a conversation with Mason about using his sperm to have the baby she’s so desperate for. The only catch is of course that Mason treated Margot to a hysterectomy against her will last season. Who is going to carry the child?

Once Hannibal had tended to his wound, Will found himself tied to a chair and being fed soup by his frenemy. He noted another place at the table and surmised that they were waiting for someone else to arrive. Well he was right! Jack arrived moments later, after sharing a lift with Chiyoh who once again disappeared, and as he entered the apartment he was attacked by Hannibal who was hiding under the table.

Jack was tied to the chair at the other end of the dining table and subjected to a torture show as Hannibal used a circular saw to cut into Will’s head sending blood everywhere. Moments later though both Will and Hannibal were alive and hanging upside down in a pig truck being welcomed by Mason Verger. Erm, what happened there then?

Hannibal continues on Wednesday at 10pm on Sky Living HD. Watch the promo for next episode Digestivo below: