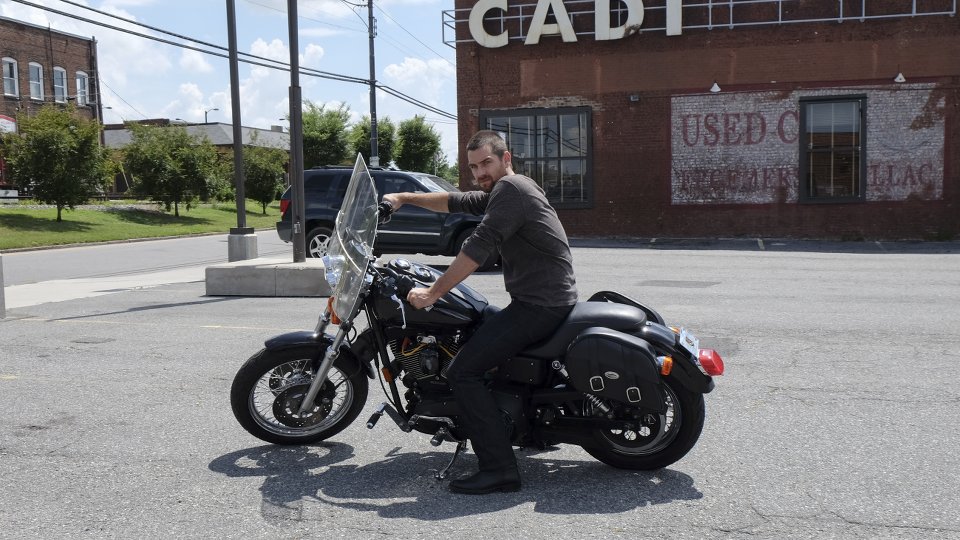 Hood was out for revenge after the tragic end to Chayton’s attempt to storm CADI.

If you haven’t seen the latest episode of Banshee and don’t want any spoilers, we suggest you stop reading now. If you have seen it and want to relive the action then keep reading.

Through a series of black and white sequences, we saw what Hood’s (Antony Starr) life might have been like had he not taken on the identity of the real Sheriff Hood (Griff Furst). When the real Hood was accosted at Sugar’s (Frankie Faison) bar, Hood diffused the situation leaving the Sheriff with his life. On his way out of Banshee he stopped at the diner where he saw Carrie (Ivana Milicevic) enjoying dinner with Deva (Ryann Shane) and Gordon (Rus Blackwell).

In a final sequence Hood spoke with the real Hood who thanked him for saving his life. He then saw Siobhan filling up her car with petrol and the two shared a short conversation and exchanged admiring glances.

Hood struggled with the death of Siobhan (Trieste Kelly Dunn) and couldn’t get out of his car at her funeral. Brock (Matt Servitto) told him that the town needed their Sheriff but Hood remained unresponsive. The only way Brock got any response was to suggest that they go after Chayton (Geno Segers) and make him pay. After returning to Siobhan’s trailer, Hood went to the bar where he drank in silence with Carrie sat by his side. The state that Hood was in put the heist in question but Job (Hoon Lee) told Carrie to proceed with the preparations regardless.

Gordon called in the feds to deal with Chayton and told Hood to back off and let them do their job. Hood met with the leader of the feds and learned their plan to take down Chayton. Meanwhile Carrie met with Colonel Stowe (Langley Kirkwood) and he attempted to reconcile with her. She turned him down and when he left she lifted his fingerprints off her hand. Carrie then gave them to Job along with a voice recording of their conversation.

As the Feds started to close in on Chayton, Hood led a rogue operation to get to his nemesis first. He found Chayton sleeping and the two men became embroiled in a nasty fight. Job was on hand to help and found himself facing off against one of the Redbones. When Job shot at Chayton, it alerted the Feds causing Chayton to flee with Hood chasing after him. Aimee (Meaghan Rath) found Chayton and he tried to kill her by crushing her throat. Hood arrived and shot him but Chayton jumped off a cliff in the water below. Suffice to say the feds weren’t happy when they caught up to Hood and realised Chayton had escaped.

Back in your box

Kai (Ulrich Thomsen) attended the funeral of his mother whilst Rebecca (Lili Simmons) decided not to bother. She spent a short amount of time with her old community and was angry when her parents tried to give her their forgiveness. Emily (Tanya Clarke) supported Kai at the funeral and afterwards told him how proud his mother was of him. Taking comfort to new levels, Emily had sex with Kai and we’re pretty sure that Brock isn’t going to be happy about that.

Whilst Kai was getting freaky, Rebecca assumed his position at the strip club and flexed her muscles when a worker was rude to her. After sacking him, she beat him up and left him injured to teach him a lesson. Rebecca then met with some of Kai’s business associates and attempted to get them to pay more money for her uncle’s services and made it clear that Kai answers to no one. Later on Burton (Matthew Rauch) summoned Rebecca to see Kai, who forced his niece to apologise to his business associates and reminded her what her place was. Rebecca left the meeting and had an angry breakdown in the club’s changing rooms.

Kai had a drink at Sugar’s bar before returning home and kissing a sleeping Rebecca on the head. Emily was still hanging around (and not dressed) and Rebecca wasn’t really sleeping…

Deva spoke with Gordon about her falling grades. He assured her that he was still her father and signed her paperwork saying he understood what she was going through. On her way home, Deva stole a wallet from a man in the street and was seen by stranger Charlie (Jerod Meagher). He attempted to chat her up and she gave him the brush off, but after a bit of sweet-talking she agreed to go as long as she could take a friend.

Deva and her friend, who was very uncomfortable about going to the party, arrived at Charlie’s and found he lived in some sort of commune. Charlie introduced Deva to everyone and she pretty much ignored her friend whilst she got high and made out with Charlie.

Banshee continues at 10pm Thursday on Sky Atlantic HD. Watch the promo for the next episode, You Can’t Hide From The Dead, below: