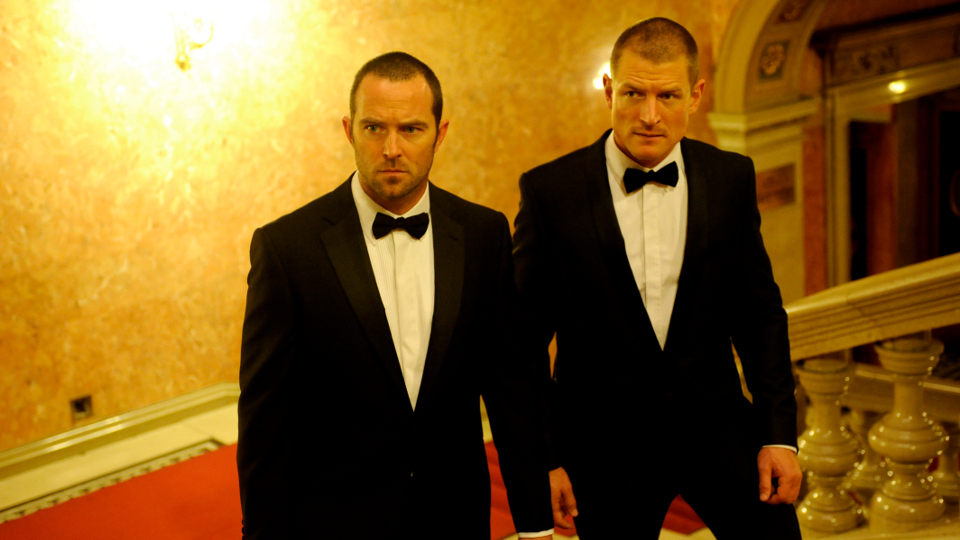 The sixth episode of Strike Back: Legacy continued the action in North Korea.

At the end of Episode 5 Scott (Sullivan Stapleton) learned that the North Koreans had captured his son Finn (Christian Antidormi). After already losing Richmond (Michelle Lukes) he’s not prepared to lose his son as well and this led to him and Stonebridge (Philip Winchester) surrendering.

Episode 6 begins with Locke (Robson Green) checking out news channels around the world. The North Koreans are parading their new prisoners, Scott and Stonebridge, while accusing Britain of an act of war. Locke looks pissed off.

Scott and Stonebridge are being held at the Pyongyang Military Complex in North Korea. The North Koreans get to work on torturing Scott for information by holding him down and forcing him to drink large amounts of water before stamping on his stomach. Stonebridge looks like he’s probably getting similar treatment as Li-Na (Michelle Yeoh) is determined to have the pair admit to their crimes. She would then use the confessions as a reason to retaliate against the West.

Meanwhile Britain gets to work on denying knowledge of the actions of Scott and Stonebridge. Locke looks even more pissed off when he is told there will be no rescue attempt for his men.

Back in North Korea Scott and Stonebridge endure another round of beatings before being strapped to adjacent chairs in front of a video camera. Scott is still annoyed at Stonebridge for not telling him about Finns predicament sooner. Stonebridge apologises.

Ignoring their orders Locke and Martinez (Milauna Jackson) analyse the videos released by the North Koreans. They think that Stonebridge is trying to communicate via sign language and decipher his gestures to point them to extraction point 4. It sounds like they might be heading to Russia.

Li-Na realises that torturing Scott and Stonebridge is probably still not going to get the confession she needs. Instead she brings Finn before them, with a hood over his head, and threatens to kill him if they do not talk. They don’t talk so they shoot him through the head. Scott begins to lose it before Li-Na reveals that is wasn’t Finn after all. Instead it’s the North Korean solider whose life they spared.

Before leaving the pair together Li-Na makes sure Scott knows that next time it will be his son who is executed. After she goes Scott wishes he sent Finn back home and is annoyed at himself for keeping him around just to show off how good he is at being a soldier.

The action then switches to Vladivostok in Russia where Locke meets up with ex-FSB agent Nina Pirogova (Tereza Srbova). If you think she seems familiar it’s because she helped save Scott and Stonebridge from Black Bear Prison in season 4.

Back in North Korea Li-Na keeps her promise and brings Finn out next then gets ready to shoot him. Scott cracks in order to save Finn and agrees to say whatever Li-Na wants. She puts him alone in front of a camera where he confesses to a list of crimes ordered by the UK government.

Stonebridge is less compliant and instead records a dating profile. Li-Na gets annoyed and once again threatens Finn but Stonebridge is clever and manages to get inside her head. She eventually gets close to him and realises too late that he has a plan. Chaos ensues as Stonebridge headbutts Li-Na and with the help of Scott and Finn they gain the upper hand.

Scott seems keen to execute Li-Na on the spot but Stonebridge convinces him that they need to keep her as a hostage to aid their escape. After arming Finn with a pistol and giving him a brief tutorial in how to use it the group make their way through the labyrinthine passages. Along the way they encounter resistance from the North Koreans and Finn notches up his first kill.

While they are trying to escape Locke, Nina and Martinez arrive by helicopter on the North Korean border. They are armed to the teeth and ready to assist the boys in their escape.

Back at the Pyongyang Military Complex Scott and Stonebridge take out another bunch of guards before stealing a jeep. The come across heavy resistance and eventually have to disembark. In just a few seconds they manage to kill a crazy number of North Koreans. As they get ready to take a second jeep Li-Na escapes and the boys speed away as she picks up a pistol and fires.

They make their way along the roads away from the complex and Scott turns to Finn with a cheeky grin on his face. Obviously still enjoying showing off he’s expecting Finn to be impressed but quickly realises that Finn has taken a bullet to the abdomen and is bleeding badly.

The find a small hospital and take Finn inside in seek of medical assistance. They agree to help and quickly get to work on saving Finn’s life. While Scott keeps a close eye on Finn, Stonebridge scouts around the hospital. He comes across some North Korean soldiers and fills them full of bullets. As the doctors finish patching Finn up as best they can many more soldiers arrive on the scene.

One of the medical staff shows the boys a safe way out. Before they leave she begs Scott to hit her in the face so that the North Korean troops will believe she was forced to help them. He reluctantly obliges knowing that she is right and her life would be in danger is she is not believed. They escape again in a truck with Finn.

An execution order is placed for Li-Na for her failures, it looks like it’s the end for her before Kwon, her old friend and lover, arrives and saves her. They flee by helicopter.

Back on the North Korean border Nina is keen to leave but Locke and Martinez refuse.

Nearby Scott and Stonebridge come across a roadblock which they manage to pass after another close call involving a grenade. Unfortunately their vehicle doesn’t survive and it looks like they might be stranded.

Stonebridge has an idea and they steal a wooden cart and a couple of horses. As they resume their escape towards the extraction point the North Korean soldiers appear in the distance in trucks, jeeps and on motorbikes. They have an obvious speed advantage and close in on them quickly while peppering the cart with bullets. Scott does his best to return fire and takes a few of them out.

Things are looking grim when suddenly a helicopter appears. Hanging out the sides are Locke and Nina who are both armed with assault rifles. They quickly get to work on shooting as many of the North Koreans as they can as the helicopter lands. Scott, Stonebridge and Martinez join in the fight as Finn is moved to the helicopter. It lifts off just in time as more North Koreans arrive and Stonebridge only just manages to grab hold of the cargo ramp and climb inside. Mission accomplished.

Safely away Finn is taken to a hospital for proper treatment. Scott and Finn have a proper father to son chat and Scott apologises for what Finn has been through. Finn however is mighty impressed by his father and Scott is impressed back when he sees Finn checking out one of the nurses.

Martinez and Stonebridge go out for drinks and she tells him that she is leaving for another assignment. Martinez wishes she could have done something to save Richmond but Stonebridge tells her it wasn’t her fault.

As Section 20 debrief, Nina receives intel on the Russian Mafia and a potential European attack. It looks like it could be a lead to Li-Na.

The official synopsis for Strike Back: Legacy – Episode 7 reads:

[quote]The battle with Li-Na moves to Europe as Section 20 search for a way to get back on her trail. Locke gets an unexpected opportunity to confront his nemesis.[/quote]

The synopsis for Episode 7 confirms that the location will be switching to Europe. We’re sure we’ll be in for another explosive episode as Section 20 close in on Li-Na.

From the images below it looks like Li-Na will find herself plenty more help from the Russians for her despicable plans. Also it appears that Scott will get to go up against Kwon and hopefully get revenge for the torture he put him through. It also looks like Scott, Stonebridge and Nina will be going to the Opera.

Preview Strike Back: Legacy – Episode 7 with our gallery below:

Strike Back: Legacy continues Wednesday July 15th at 9pm on Sky 1 and the series will air in the US on July 31st on Cinemax.