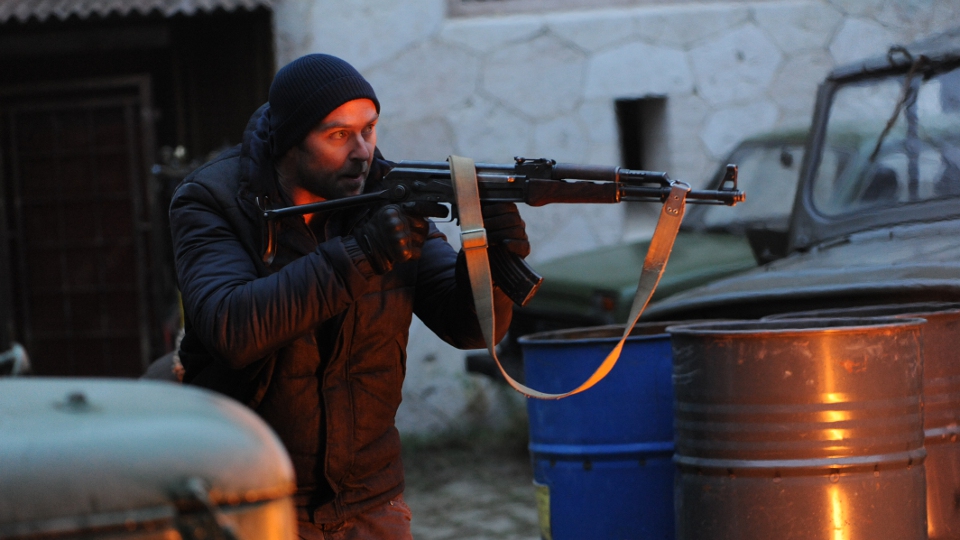 The fifth episode of Strike Back: Legacy moved the bulk of the action away from Thailand to North Korea.

At the end of Episode 4 we saw Scott (Sullivan Stapleton) desperately trying to get to Richmond (Michelle Lukes) who had been captured by Li-Na (Michelle Yeoh). Sadly he was too late to save her and found her lifeless body lying in the middle of the road.

Episode 5 begins with Scott and Stonebridge sat in the back of a truck dressed as construction workers for cover. As the truck makes it’s way to Banshi on the North Korean border Scott has a couple of flashbacks to his recent time in Thailand. He’s obviously devastated at the loss of Richmond and we see him lighting a candle for her.

Scott also has a talk with his son Finn (Christian Antidormi) who sarcastically asks if it will be another 16 years before he see’s his Dad again. Scott still emotional explains that he has a job to do but will be back in a couple of days. He tells Finn that he is welcome to stay in the hotel a while longer if he wishes which seems to please Finn.

Section 20 have arranged the passage for Scott and Stonebridge along with some C4 explosives. They aren’t able to send them with guns though due to the metal detectors at the border checkpoints. Instead they are to meet up with an MI6 contact in Pyongyang who will provide them information and supplies.

Once inside North Korea Scott and Stonebridge will be pretty much on their own without proper support from Section 20. Also they can’t risk being discovered as their presence would be seen as an act of war by the North Koreans. They have 72 hours to find and destroy the Vanadium.

At the border everyone in the truck is made to get out for an inspection. One of the border guards picks on Scott and demands to know how many times he has been to North Korea. Scott can’t understand the questions so answers with his typical ‘Screw You’ in Korean which gets him a brief beating.

After successfully getting pass the border they travel by truck for a little while before jumping out and heading to their contact on foot.

Meanwhile Li-Na has arrived back in North Korea too with the Vanadium. She is congratulated for her dedication to her country and taken to see a guy she once knew. It seems they were probably together in the past and that there may be some feelings still there. She also knows he is likely being forced to spy on her.

Scott and Stonebridge complete their journey by catching a ride on the back of a freight train. They then pay the MI6 contact, Mr Park, a visit who is hoping that helping them will earn him a way out of North Korea. Mr Park gives them the information and supplies that they need for their mission. They report in to Locke (Robson Green) at Section 20.

Suddenly Mr Park’s son arrives with a group of soldiers. Scott and Stonebridge hide while Mr Park’s son assures his father he is helping and that they will be rewarded for helping the military. Instead the soldiers shoot the pair dead.

Scott and Stonebridge manage to sneak around and take some of the soldiers out by stealth. However there are too many and eventually they have no choice but to open fire. As they become overwhelmed they escape by jumping through a window. A split-second later and they would have been crushed by a passing train but they just get past it in time.

As night falls the pair evaluate their situation. They realise they now have no way of contacting Section 20 and that their cover has been compromised. The North Koreans will now be looking for them. Stonebridge suggests they could abort the mission but Scott wants revenge on Li-Na for Richmond’s death.

North Korean patrols are out searching for them but they manage to evade them for now. Li-Na decides it is time to put her contingency plan into action and we then see Finn is approached by a Korean girl back in Thailand.

Later he is followed back to his hotel and when he realises he takes flight. Section 20 take out some of the Koreans but Finn isn’t so lucky and is eventually captured.

As Scott and Stonebridge make their way to their target they come across a poor North Korean family in the woods. They give them some of their rations.

Next they arrive at the Smelting Plant and find that it is heavily guarded. Reporting in to Section 20 Stonebridge learns that Finn has been captured and that they have been unable to locate him. This leaves him with a dilemma of whether to tell Scott or not. He chooses not to for now as he isn’t sure how he would take the news.

As Stonebridge gets to planting explosives, Scott causes chaos and distracts the guards. After some fights and gun battles they are eventually successful in destroying their target.

Afterwards they find themselves surrounded by North Koreans and they play a message of Finn aimed at Scott. Stonebridge explains that he knew Finn was in danger which really upsets Scott. He throws his gun to the ground and the pair are forced to surrender.

The official synopsis for Strike Back: Legacy – Episode 6 reads:

[quote]Super soldiers Scott and Stonebridge make a major mistake when they step into the clutches of torturous Li-Na. Will Locke defy orders to get them out?[/quote]

Scott has two aims, to kill Li-Na and to save his son. He appears to be willing to do whatever it takes to avenge the death of Richmond and this makes him dangerous – to his enemies, himself and Stonebridge. It seems the pair are in for a spot of torture next episode and that they will be put on video to confess to their crimes. If they aren’t careful it could well lead to a new World War.

From the images below it looks like they will at least attempt an escape but we wouldn’t be surprised if Section 20 turn up to give a hand.

Preview Strike Back: Legacy – Episode 6 with our gallery below:

Strike Back: Legacy continues Wednesday July 8th at 9pm on Sky 1 and the series will air in the US on July 31st on Cinemax.