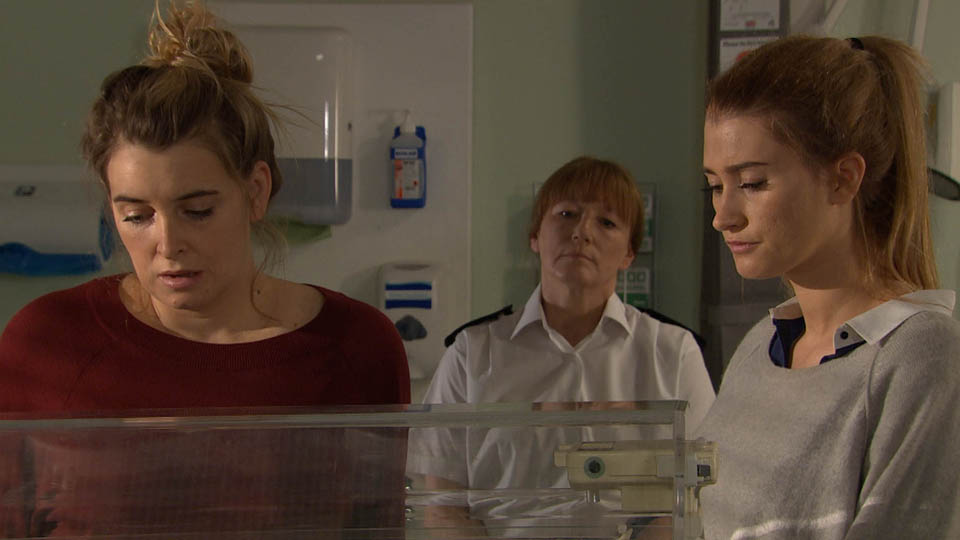 Welcome to our look ahead to what’s going on in Emmerdale this week as we find out who is the father of Charity’s new baby and much more.  Read on…

Charity is forced to call the father of her baby

Debbie and Ross awake in a makeshift bed in the garage, whilst good old Pete is oblivious and literally holding the baby, who has a worrying temperature.  James advises Pete to get him to the hospital pronto, leaving Debbie very guilt ridden as she rushes to meet them and learns that Moses has to go into intensive care.

Her guilt becomes unbearable when they hear from the doctor that Moses needs an operation and her behaviour sparks suspicion in Cain who wonders what she’s hiding.  Just when Debbie is feeling the pressure of the situation, Charity turns up at the hospital (with prison guards) and eventually concedes to phone Moses’ father and let him know what’s going on.  Just who is the father and how will he react to the news?  You’ll just have to watch and see!

Charity tells Debbie she spoke to the father and he wasn’t interested.  It seems Charity isn’t that bothered either as Debbie finds out later in the week when she realises Charity hasn’t been to visit Moses again.  She’s left to face the doctor (and her guilt) as he delivers some serious news about Moses condition.

Meanwhile, Ross is struggling with his feelings for Debbie after they spent the night together in the garage and ends up blurting out to Finn that he’s slept with her behind Pete’s back.  A stunned Finn can’t get his head around his brother’s betrayal and goes to see Pete, but is interrupted by Debbie.  Will Finn reveal all to Pete?

Jai’s plan to spy on Rachel backfires on him

Is it just us or is Jai getting more and more heelish as the weeks go by?  As he and Rachel continue to argue about what’s best for Archie, he ups the ante when she claims Archie is unwell, by sending a doctor to her house.  Rachel is horrified and the rage starts to bubble up, unnerving poor Sam.  As Rachel stresses about the impending court case, it’s Sam that she takes it out on, but newly returned Ali reminds her that Sam is on her side.

Jai further stirs it when he tells Rachel that Sam and Tracy were all over each other in the café, fuelling her rage.  He also asks Leyla to befriend Rachel and is left concerned when she reports back to him that she heard a fracas from inside Rachel’s house, leaving Jai to worry that she’s hit Archie.  However, Leyla convinces him that they need proof and they come up with a plan to house a camera in one of Archie’s teddy bears to capture what’s going on.

It seems that this plan hasn’t been thought through when later in the week, Jai is caught on teddy-cam confessing his love for Leyla and it’s Rachel that finds the footage!  Rachel revels in finally having the upper hand and it’s not long before Megan pushes her too far and is given some home truths.  Trying to hide her heartbreak, Megan comes up with a long term plan that will put Jai back in his box for good and asks Rachel and Sam to be in on it.  Will they agree?

April is pleased that Laurel is moving back in with her and Marlon, but the pair are uneasy about discussing their sleeping arrangements.  To make matters more tense, the result of Laurel’s HIV test arrive.  Marlon confides in Paddy that he isn’t sure he can share a bed with her.  Can the pair be honest and what will the test results reveal?

Later in the week they decide to take the kids to the fair, to try and get some normality back and feel like a proper family once more, but with all that has happened are they kidding themselves?

Kerry uses Ameila to help win over Joanie so she can see Kyle again, but will Joanie be able to fogive and forget?

Cain continues to blackmail Robert, who in turn threatens to pull out of the scrapyard in an attempt to get back at Aaron.

Zak realises that her pony Hamish is unwell and worries how Belle will deal with the news.

Vanessa wonders if Kirin is the mystery benefactor who put £10k through her letterbox, but when he swears it wasn’t him she is left with only one other person it could be.

Carly decides to try and fix a leak at the shop herself as a panicked Bob is told by Brenda that she’s checking all their accounts so she can get on with building Gennie’s memorial playground.