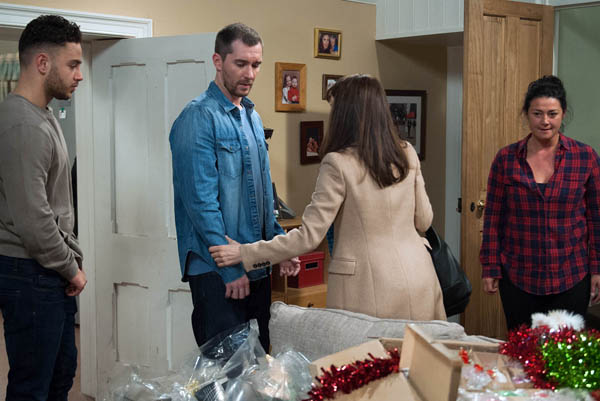 Let’s take a looksee at what’s going down in Emmerdale this week shall we and Laurel is feeling guilty, Moira’s hitting the bottle and Tracy and Leyla are at loggerheads.

Moira gives up the farm

Moira puts on a brave face when Adam and an ovulating Victoria talk about it being time they moved back to their own home.  Emma is still playing nice with Moira and suggests they all have Christmas together and Moira is grateful but it will mean turning her back on The Dingle clan.

Adam checks Moira’s ok with him moving back home and she tells him she is but as he leaves it’s obvious she’s not.  She ends up rooting through boxes of old stuff and finds a bauble that Holly made.  Later, she’s furious when Emma accidentally breaks it and kicks Emma out.  As Moira finishes in the freezer at work and closes the door, a vengeful Emma lurks in the shadows…

A hungover Moira is confused when Adam accuses her of switching off the freezer;  their stock is ruined!  Moira makes a big decision.  She heads to The Woolpack and throws her keys at Emma and Pete, telling them the farm is theirs.  Moira then vows to start a new life and hits the bottle to celebrate.

Laurel wakes up and is instantly guilty over what she did the night before to Ashley.  As she wearily braces herself for the day ahead she realises they need nappies and leads Ashley upstairs once more;  she plans to lock him in the bedroom whilst she nips out.  When she comes home she goes straight to check on him and panics when he’s locked himself in the bathroom and the water is running…

It’s the final straw and Laurel finally concedes to getting a carer in.  Ashley is confused as to who Will the carer is, but he’s soon won over when he plays him a tune on the guitar and Laurel feels she can finally relax a bit.

It seems she may be premature as later when everyone is playing with the nerf guns at the pirate ship, Ashley becomes distressed and ends up falling and hitting his head in the process.

Aaron misreads Liv having a go at Jacob over his taunting of Gabby and ends up chastising a bewildered Liv.  Chas and Aaron later clear up after a rowdy party and Aaron concedes Chas is right about Liv, resolving to be firm with her from now on.

Meanwhile, Liv tells Bernice about Gabby being bullied and is disappointed when Gabby gives her a dirty look and Aaron still refuses to believe that she was sticking up for Gabby.  Liv decides to steal some vodka from the shop and is soon trying to break into Mill, only to be caught by Rebecca who tells Aaron what she’s up to.  Aaron finds Liv drinking and feels guilty that he didn’t believe her about Gabby being bullied.  She begs him to find them a place of their own, clearly having had enough of living in the crowded pub.  Aaron doesn’t want to use their dad’s money, but Liv urges him to put the money towards a good use.

Rebecca makes an ill informed comment over Aaron affording to buy Mill and in revenge he breaks into Home Farm and steals money from the safe.  Rebecca is at home and notices the safe is open, but who will she suspect has stolen the cash?

Later, Liv is delighted to hear that they will be buying Mill after all.  Aaron seems happy that everything is going to work out, until a drunken Moira plants the seed of doubt over Rebecca and Robert’s relationship.  Aaron struggles to hide his jealousy when Rebecca asks for Robert’s input once again.

Marlon teases Paddy that Chas is too good for him and he’s miserable when he receives his divorce papers.  He decides to take action and asks a client out for a drink.  It doesn’t go well and it’s down to Rhona to rescue him.  It seems the new lady isn’t finished with him and her next visit sees Chas stepping in to help.  Could Chas be interested in Paddy or is she just helping out a mate?

Leyla overhears Frank handing out dodgy advice to Jacob and is unimpressed when Jacob teases Gabby.  She hatches a plan with Vanessa to fiddle with Frank’s stock order for David’s shop and when countless Christmas trees arrive, David is fuming.  Tracy is suspicious of Leyla and in revenge plans to get Leyla to move out.

When Bernice shows Lisa a dating website, she gets an idea and it’s not long before she’s going on a date.