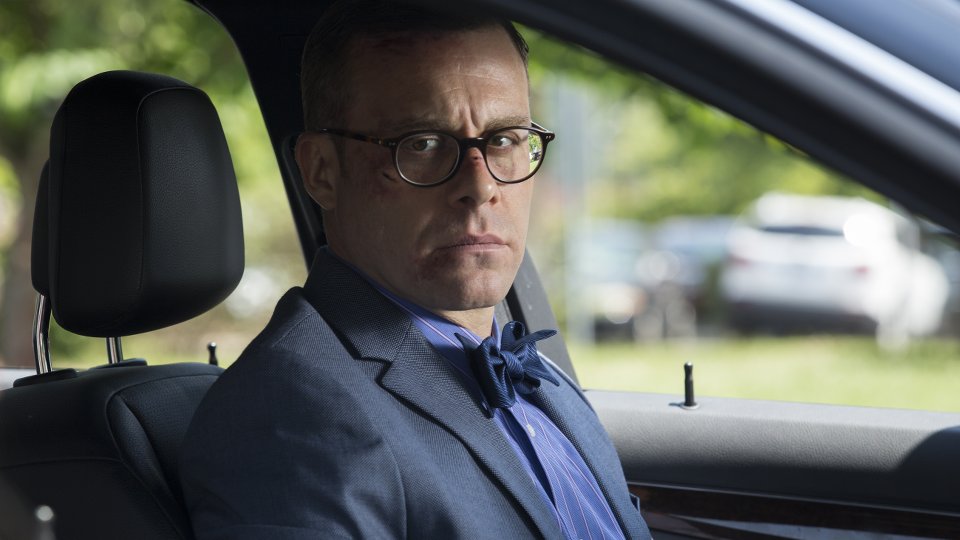 With his secret on the verge of being revealed, Hood (Antony Starr) acted recklessly in the latest episode of Banshee.

If you haven’t seen the latest episode of Banshee and don’t want any spoilers we suggest you stop reading now. If you have seen it and want to relive the action then keep reading.

The secret is out

Hood dealt with the threat of being found out for most of the episode but told Sugar (Frankie Faison) and Job (Hoon Lee) to continue as normal until he formulated a plan. The odd couple completed their task of infiltrating Sterling Security so that Job could download an algorithm from their servers. He managed to do it in the nick of time as Sugar struggled to keep things together as the lookout.

The fast & the furious

Rebecca (Lili Simmons) continued to grow as a criminal by volunteering to accompany Burton (Matthew Rauch) on a mission. The unlikely duo teamed up to intercept the Redbones collecting Tommy Littlestone’s (Ricky Russert) body. After seeing the body being taken away, Rebecca got behind the wheel and gave chase. A game of chicken ensued with Rebecca and Burton claiming victory and the van with the body in flipped over and leaking fuel. Rebecca went to investigate the crash and set it on fire leaving the police to find the bodies and the wreckage.

Aimee (Meaghan Rath) was affected by the building war between Proctor and the Redbones and tried to warn a disinterested hood. Later on she shed a tear as Chayton (Geno Segers) picked up his brother’s body and left plotting revenge.

The grind of everyday life became too much for Carrie (Ivana Milicevic) this week so she quit her job and went drinking. There she met a man with a motorbike who bought her endless rounds of shots. When she tried to leave he told her he expected some gratitude. What he got instead was the crap kicked out of him and robbed. Carrie stole the keys for the motorbike then took off. It wasn’t long before she attracted the attention of a police car but she out ran it and hid in the woods. As she tried to start the bike again she discovered it was out of fuel so she called Hood to pick her up. As he returned her home, he told her of his intention to leave Banshee.

Thinking he was going to be leaving town, Hood stormed into the Savoy and put attempted to shoot Proctor in the face. He missed leaving the two men to fight it out in a lengthy and bloody battle. Proctor’s attorney called the police and Brock showed up just as Hood was about to put a hammer in Proctor’s head. Proctor was arrested and thrown into jail for assaulting a police officer.

As a side note Gordon (Rus Blackwell) refused Proctor’s plea deal and Proctor was told that his mother had taken a turn for the worse. He was prevented from getting to her side thanks to being arrested.

Deva (Ryann Shane) continued to act out as she struggled with the state of her family and the lack of a relationship with her real father Hood. During a visit to the local video game store, Deva scoped the place as she started to plan a break in to get a game for her brother. An encounter with Hood, where she realised he was planning to leave, didn’t seem to deter her from her impending criminal activity.

Instead she broke into the shop, stole the game and set off the alarms. As she made a quick escape she dropped one of her tools leaving evidence that she was there. She left the game for her brother to find and jumped into bed before Carrie arrived home. Mother and daughter had a brief exchange with Carrie making it clear that Deva wasn’t going to be able to continue skipping school.

Will she or won’t she?

Siobhan (Trieste Kelly Dunn) spent the majority of the episode AWOL after a tense exchange with Hood about his real identity. She told him to leave her trailer then she disappeared as she tried to process the information. Hood told Job and Sugar that she knew and agreed to leave town at the end of the day if he couldn’t convince her to stay quiet. After trying to reach her several times on the phone, Hood found Siobhan back at the station where she told him she would keep his secret but that she wanted him to quietly resign and leave town.

Batten down the hatches

Hood and Siobhan’s conversation was cut short when the Redbones, led by Chayton, arrived outside the station armed with guns and ready to attack. Hood dived to the floor taking Siobhan with him as the army prepared to do battle.

Banshee continues on Thursday at 10pm on Sky Atlantic HD. Watch the trailer for the next episode Tribal below: