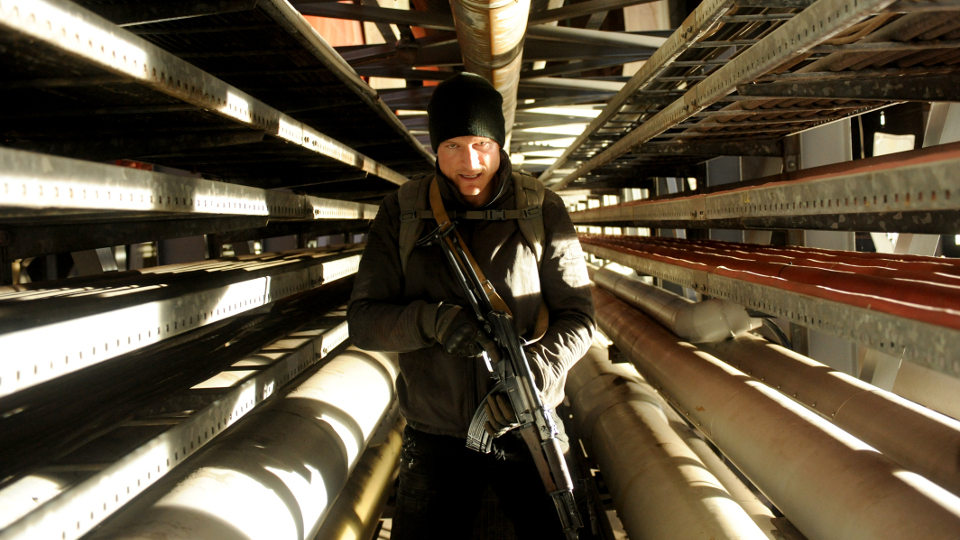 The fourth episode of Strike Back: Legacy ended with a shocking twist.

At the end of Episode 3 Scott (Sullivan Stapleton) and his son Finn (Christian Antidormi) were trying to escape the Yakuza in the jungle. Meanwhile Section 20 were forced to flee the island after confronting Shiro (Masa Yamaguchi) and had to leave Stonebridge behind (Philip Winchester).

Episode 4 begins with Stonebridge is using a small boat for cover from the Yakuza gunfire. He has no way out and the Yakuza start to surround him. It’s not looking great until suddenly a few of the Yakuza are taken out by the two smugglers who come to his aid.

Back in the jungle Finn is being escorted at gunpoint by his captor. His father Scott appears and engages the man in melee combat. He soon takes him out and then grabs a gun and shoots a couple more Yakuza. Finn is safe for now.

Back on the island Stonebridge and his saviours do battle with the Yakuza. They kill most of them before escaping in a boat. There they have a heated exchange as Section 20 have ruined the undercover mission the Mercs were on for the CIA. Stonebridge vows to hunt Shiro down.

Scott and Finn manage to get through the jungle to the waters edge. They have lost the enemy for now. Finn realised that Scott really is a soldier and typical Scott boasts about how good he is at it. Finn spots a fishing boat near the shore and they signal for help.

Back on the island, despite suffering from a nasty wound, Shiro gives his head of security a kicking for failing him. Li-Na (Michelle Yeoh) then appears and tells Shiro that the exchange of Vanadium must not be delayed.

Back on land Stonebridge calls Locke and tells him what happened. He suggests a meeting with the Mercs and Locke (Robson Green) agrees. They all meet at a bar with Richmond (Michelle Lukes) and Martinez (Miluana Jemai Jackson) in attendance.

Locke impresses by calling in a favour to get the CIA to confirm their identities – Mason (Leo Gregory) and Faber (Dustin Clare). While Section 20 and the CIA mercs discuss a way forward, Shiro gets the Vanadium loaded onto boats ready to move.

On the fishing boat Finn questions Scott about the situation. He’s not impressed by how calm his dad is and how he can makes jokes after what happened. Scott then takes a shot at giving his first ever fatherly advice and impresses himself.

Section 20 and the Mercs head to a drug compound in search of the Vanadium. Scott finally gets his hands on a phone and calls in. Stonebridge requests his help but then they lose phone signal. They start the mission without Scott and search the compound for the Vanadium.

Scott puts Finn on a bus then steals a dirt bike to get back to his team. Meanwhile Li-Na arrives with drugs to exchange with Shiro for Vanadium.

The Mercs ignore Section 20’s plan and get ready to take Shiro out. Section 20 realise what they are up to and manage to stop them. Suddenly they are spotted and a fight breaks out with the Yakuza.

Shiro and Li-Na escape by car while trucks apparently loaded with Vanadium also leave. Stonebridge commandeers a dirt bike and heads after the trucks. While Locke, Martinez and Richmond follow.

He catches the rear truck and manages to fight his way aboard while under fire. He cooks a couple of grenades and leaps from the truck to safety as it explodes.

Section 20 track down Li-Na, Shiro and the second truck. They are at a heavily fortified helipad getting ready to move the remaining cargo by air.

Scott calls in again and speaks to Richmond. She can’t talk long but reminds him he owes her dinner.

Section 20 move in but immediately come under heavy fire. Richmond and Martinez head for the Vanadium while Locke and Stonebridge draw the enemy fire and head for Li-Na.

Li-Na leaves Shiro to die for betraying his father. Before she goes she leaves him a gun with a single bullet which gives him the option to end his life himself rather than bleed out. He tries but before he can Locke stops him and gets him to confess the rest of Li-Na’s plan. Turns out that she still has the Vanadium but before he can give up the location he takes a sniper bullet through the brain courtesy of the CIA Mercs.

Richmond attempts to draw the enemy away from the truck while Martinez plants explosives. Richmond takes a couple of bullets but keeps fighting to keep the distraction up for Martinez. It works and Martinez is successful in destroying the truck but Richmond is captured by the Yakuza. She is put in a car with Li-Na and driven away.

Scott still hasn’t arrived but is closing in on their location fast on his dirt bike. Stonebridge calls him and gives him the terrible news that Richmond has been taken by Li-Na.

In the car Li-Na holds a badly injured Richmond at gunpoint and pushes her to tell what Section 20 know of her plans. She promises to let Richmond live if she tells her but she is defiant and will only answer with her name, rank and service number. Finally she tells Li-Na that Scott will hunt her wherever she is.

Scott desperately races to catch them up but he doesn’t make it. Instead he comes across the lifeless body of his love dumped in the road. He rushes to her aid but she appears to have been executed. It’s heartbreaking but there is nothing he can do but hold her. Stonebridge and Martinez arrive minutes behind.

Meanwhile Li-Na arrives at the airport as her deadly cargo is being loaded onto a plane and she declares that it is time to go home.

The official synopsis for Episode 5 reads:

[quote]Scott and Stonebridge covertly enter North Korea, where the pair attempt to infiltrate a heavily-guarded smelting plant and blow up the stolen Vanadium that Li-Na secured for the regime.[/quote]

We’re sure fans will agree that Richmond is a big loss for the show and her death came as a huge shock. It’s also going to hit Section 20, and Scott in particular, very hard. We suspect they will be out for revenge and we hope that it’s Scott who puts an end to Li-Na. As mentioned in the synopsis Episode 5 will see Scott and Stonebridge covertly enter North Korea. Things never go to plan for the pair so we doubt they will be able to stay quiet for long and could well be on the way to starting a World War. Whatever happens we’re sure Episode 5 is going to be packed full of action.

Preview Strike Back: Legacy – Episode 5 with our gallery below:

Strike Back: Legacy continues Wednesday July 1st at 9pm on Sky 1 and the series will air in the US on July 31st on Cinemax.