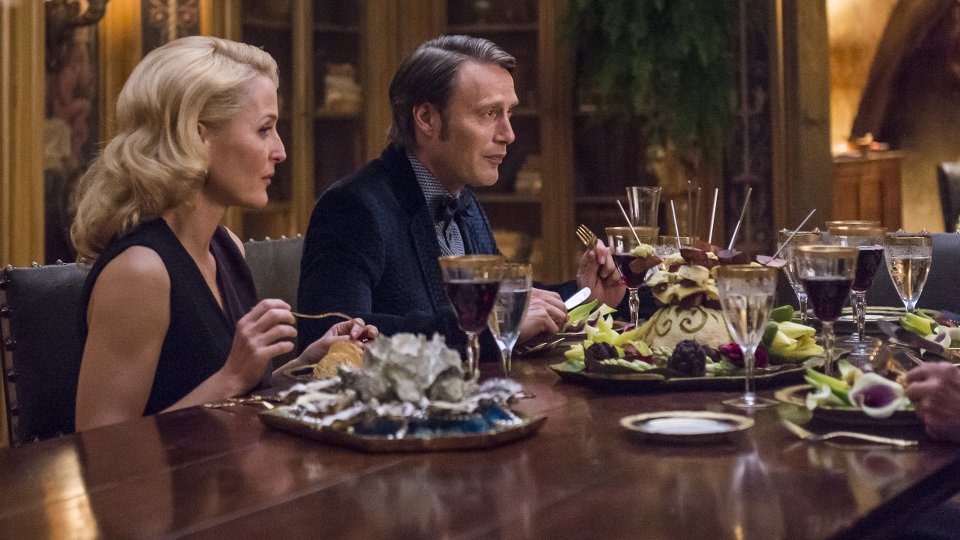 Will (Hugh Dancy) digs into Hannibal’s (Mads Mikkelsen) past as he tries to track down his frenemy.

If you haven’t seen the latest episode of Hannibal and want to avoid spoilers we suggest you stop reading now. If you have seen it and want to relive the action then keep reading.

Despite being within very close proximity of Hannibal last week, Will travelled to Lithuania to visit Hannibal’s childhood home. His aim was to learn more about the cannibal and try to understand how he had become the killer he now is. Upon arrival Will spotted a woman wielding a shot gun, which turned out to be Chiyoh (Tao Okamoto) who was hand maid to Hannibal’s aunt Lady Murasaki. The two danced around each other until they finally met when Will discovered a man being held prisoner at the house.

Chiyoh explained that the man had killed Hannibal’s sister Mischa (more on that later) and she was keeping him there to punish him for what he did. Will and Chiyoh spent some time together with the hand maid claiming Will was like Hannibal, something he denied by explaining if he were like him she would already be dead.

Proving how little he knows himself, and how much he’s changed, Will broke the man out of his prison leaving him free to attack an unsuspecting Chiyoh when she went to check on him later. The two entered into a struggle and Chiyoh killed him to save her own life. Will returned to the house and Chiyoh pointed out that he had done exactly what Hannibal would do by forcing her to kill someone.

Will went a step further by raising the dead man up to the ceiling like a tableaux that we’re sure Hannibal would be proud of if he’d been round to see it.

Can I pick your brains?

Professor Sogliato (Rinaldo Rocco) ate his last meal and received an ice pick to the brain during dinner with Hannibal and Bedelia (Gillian Anderson). Hannibal impulsively lodged the ice pick into the side of Sogliato’s head leaving the poor man delirious and telling them he couldn’t see. Watching on in shock, Bedelia walked over to Sogliato and pulled the ice pick out of his head. As she did so, blood gushed out and the professor died whilst bleeding out on the table. Hannibal joyfully pointed out that Bedelia killed him.

Later in the episode Hannibal and Bedelia were joined by Signore Albizzi (David Calderisi) and Mrs. Albizzi (Toni Ellwand) for dinner and apologised for the absence of Sogliato. What the guests didn’t realise is that they were eating the good professor as Bedelia looked desperately like she wanted to vomit. Ewww!

After their second dinner of the episode, Bedelia enjoyed a bath whilst Hannibal washed her hair. The two talked with Bedelia pressing to find out what happened to Hannibal’s sister and guessing that he ate her. After voicing the question out loud, she submerged into the water.

Earlier in the episode Bedelia showed that she may be smarter than she looks by claiming she knows exactly how to get out of the situation she’s in once Hannibal is caught. She warned him that his actions had set the wheels in motion for his eventual capture.

Jack Crawford (Laurence Fishburne) lives! We knew he would make it given how he’s been in all the publicity shots for the season but this week was the first time we’ve seen him following the season 2 finale bloodbath. Jack has arrived in Florence looking for Will and he shared an exchange with Rinaldo Pazzi (Fortunato Cerlino) who tried to get him on board with capturing Hannibal.

Bedelia continued to psycho-analyse Hannibal and it seems that she’s having some success in getting under his skin. The episode came to a close with Bedelia drawing comparisons between Hannibal’s feelings for his dead sister and his feelings for Will. Her latest round of analysis prompted him to realise that he would have to eat Will to get closure.

Hannibal continues Wednesdays at 10pm on Sky Living HD. Watch the promo for the next episode, Aperitivo, below: