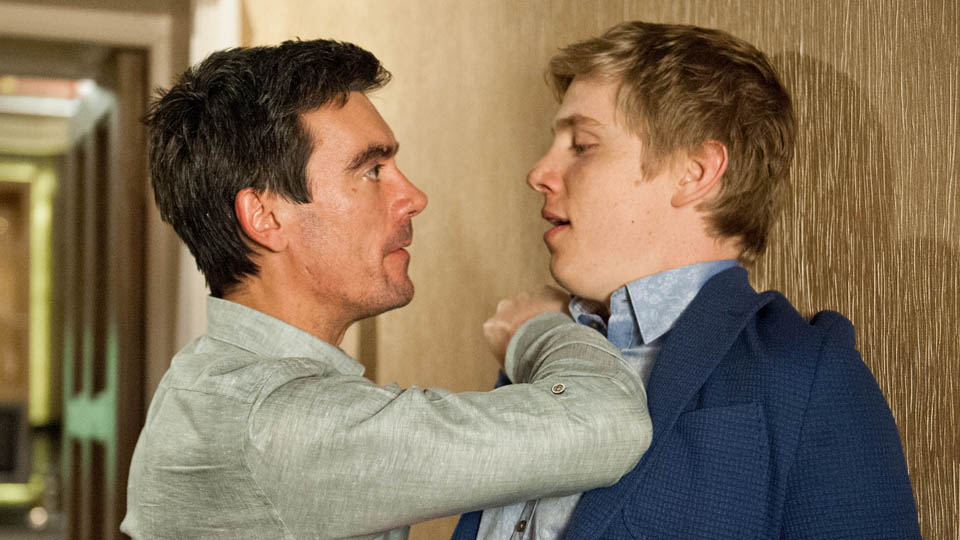 Welcome to our weekly look ahead to what’s in store for our favourite villagers in Emmerdale.

The tension at the dinner party with Rob, Cain, Chrissie and Moira is palpable and as Cain and Robert find themselves alone in the kitchen, Cain throws him against the wall, demanding that he explains what he’s playing at with the photo of Cain and Chrissie kissing.  Robert tells Cain that he wants him to find Victoria and Adam otherwise Moira will see that photo.  As Chrissie walks in, Robert plays the role of hurt husband as he shows her the photo.

As the week progresses, Robert continues to push Cain to find the pair, leaving Cain furious, but determined.  He decides that Finn knows more than he’s letting on and follows him to a hotel, barging past him into Adam and Victoria’s room.

Victoria and Adam explain that they weren’t planning on running away from Vic’s day in court, but that they are planning to get married the next day.  Angry at their behaviour, Cain storms out, warning Adam he’s not done with him.  He makes a call to Robert arranging a meet up, but will he shop the pair to Robert in return for the incriminating photo to disappear?

Will Victoria and Adam wed?

As the day of the wedding arrives, Vic and Adam get ready and both try to put the impending court case out of their mind.  Meanwhile, an angry Robert plots to stop the wedding at any cost and sets off to the address that Cain gave him.  At the registry office, Aaron arrives to support Adam and Victoria is accompanied by her GBFF Finn.

It’s all smiles as the intimate ceremony gets underway, but they are soon distracted by a noise outside.  Will an uninvited arrival halt proceedings?  You’ll just have to watch and see!

Later in the week, Vic has her day in court and Ashley is touched at how remorseful she is.  Adam is still suggesting that he take the blame, will Vic cave in or could a different series of events see her escape sentencing?

Priya asks Kirin for some help retrieving a missing computer file that she accidentally deleted and he’s only too happy to direct her to the correct folder.  Whilst there she makes a shocking discovery when she finds the faked DNA results letter that Rakesh created.  Luckily, Kirin has gone by this point, but Priya is left stunned that Rakesh could do such a thing.  She confronts him and makes it clear exactly where she stands on the situation.

Rakesh obviously doesn’t agree with her, as so she packs her bags and moves out.  When Kirin finds out she’s moving he wants to know why and Rakesh lies, saying David has come between them.  Later, when hot-headed Kirin sees David and Priya hugging, he wades straight in.

Priya is determined that Rakesh needs to tell Kirin the truth and that he shouldn’t hear it from her, but later when she tells a big lie herself, will it give her sympathy for Rakesh after all?

It seems the guilt is eating away at Rakesh as he anonymously puts £10k through Vanessa’s letterbox to help with the baby.

The Dingle clan christen Charity’s new baby ‘Moses’ as Debbie struggles with her feelings for Ross.  His actions against Jai leave her wanting him more than ever.

Joanie is back in the village and soon helping Belle with her studies, whilst Kerry is determined to win her over.

Harriet is jealous over Ashley’s closeness with Laurel.  Can Marlon’s proposition help ease the situation?