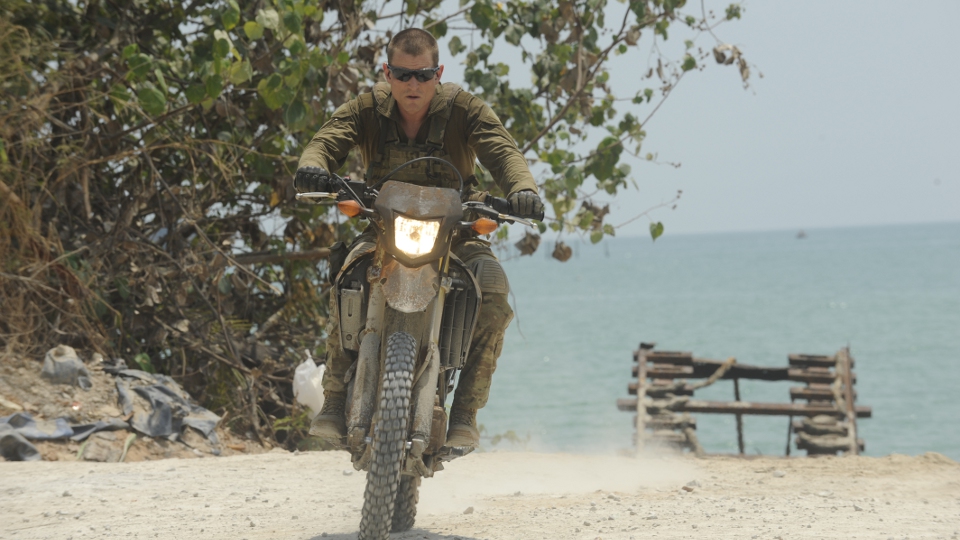 The third episode of Strike Back: Legacy continued the explosive start to the final series.

At the end of Episode 2 we saw Section 20 rush to the aid of Mei Foster (Michelle Yeoh) as her husband had apparently died in his hospital bed. What they didn’t know is that she is an undercover agent for the North Korean’s Office 39 and that it was her who had killed him.

Episode 3 begins with Mei aka Li-Na meeting with the leader of the Yakuza. She is trying to do a deal with his son Shiro to buy Vanadium to use in missiles. When his father refuses to honor the deal, Hiro decapitates him with a samurai sword. They decide to say that Section 20 is responsible so that the Yakuza will avenge his death.

Back at the hospital as Mei she meets with Locke (Robson Green) who has ordered an autopsy on her husband. He suspects foul play and Mei agrees to let them investigate. Scott (Sullivan Stapleton) and Stonebridge (Philip Winchester) interrogate the Foster’s assistant presuming she is behind the death and accuse her of working with Office 39. She confesses to the deed to keep Mei’s cover intact but Section 20 don’t believe her.

Back home at the British Ambassador’s Residence Li-Na gets ready to flee. Locke informs her of the confession and sends her a car to pick her up. Section 20 continues the interrogation after getting the pathology results back. Knowing that Robin Foster was poisoned they realise that her confession was false and that it must be Mei who was behind it.

Scott and Richmond (Michelle Lukes) are continuing their romance and talk about his son Finn who is due to arrive. He then leaves to meet him for the first time when he arrives at Bangkok airport.

While Scott is picking his son up the Yakuza launch an assault on Section 20’s safehouse. A huge gun battle ensues which results in Stonebridge’s friend Garland getting killed. Most of the attackers are killed by Section 20 but one escapes on foot and he is chased down by Stonebridge.

As Scott drives back with Finn they have their first ever chat and Finn is annoyed his dad walked out on his mum when she was pregnant. Their chat is interrupted though when they are tailed by Yakuza and then also attacked. After a short car chase they crash off the road and down an embankment into the jungle. Both are uninjured but must escape on foot.

After their battle Section 20 realise that Scott has also been attacked and split up – Locke and Martinez go after Mei while Stonebridge and Richmond go to help Scott. Locke accuses Mei of being Office 39 and then the pair fight with Michelle Yeoh getting to showcase her incredible martial arts skills. Locke holds his own but Mei/Li-Na escapes.

Stonebridge and Richmond find Scott’s crash site but are recalled by Locke to help go after Li-Na. They decide to go after the Yakuza syndicate who will lead them to Shiro and Li-Na.

Meanwhile Scott and Finn continue their escape on foot through the jungle. Scott tries to tell Finn that he’s a soldier but he doesn’t believe him, instead he accuses him of being a drug dealer.

The Yakuza syndicate meet with two smugglers – Faber (Dustin Clare) and Mason (Leo Gregory). Shortly after Stonebridge and Richmond attack and Stonebridge tortures one of them by electrocuting him in the mouth until he finally gives up the location of Shiro and Li-Na – ‘The Island’. Another gun battle takes place and they kill plenty more Yakuza as they make their escape.

Next Section 20 head to the island on a boat with plenty of guns. Waiting for them is Shiro, Li-Na and seemingly hundreds of Yakuza. After more gun battles Stonebridge finds Shiro and the pair engage in hand-to-hand combat. Stonebridge tries to extract Shiro but is pinned down and Shiro gets away.

Back in the jungle Scott and Finn argue some more until their pursuers finally catch up with them and capture Finn.

Section 20 battle on but are overwhelmed and forced to retreat leaving Stonebridge behind.

The official synopsis for Episode 4 reads:

[quote]While Scott has a killer talk with his son, the rest of Section 20 form an uneasy alliance with a pair of CIA mercenaries to go after Shiro and Mei Foster.[/quote]

With Stonebridge left behind and Scott lost in the jungle Episode 4 looks like it’s going to be about getting Section 20 back together. The synopsis hints that Scott will rescue Finn which will probably help convince him that he is actually a soldier. Also it seems that Stonebridge will team up with some mercs who we presume are the smugglers who were meeting with the Yakuza. Once reunited we’re then expecting to see Section 20 resume their pursuit of Shiro and Li-Na/Mei.

Preview Strike Back: Legacy – Episode 4 with our gallery below:

Strike Back: Legacy continues Wednesday June 24th at 9pm on Sky 1 and will air in the US on July 31st on Cinemax.