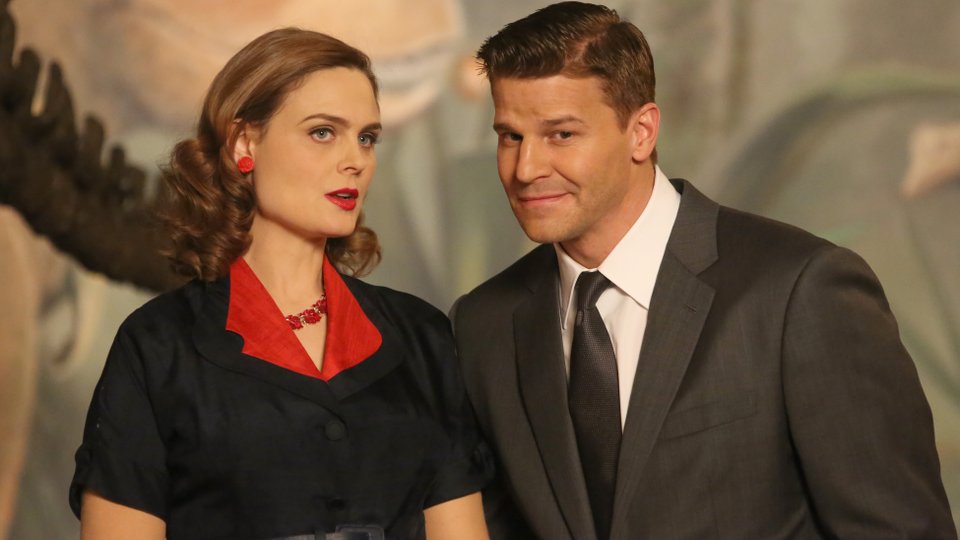 Bones concluded its 10th season in the UK tonight and big changes are in store for the next season.

If you haven’t seen the season 10 finale of Bones and don’t want any spoilers then we suggest you stop reading now. If you have seen it and want to hear our thoughts on season 11 then keep reading.

Hands up who felt like the season 10 finale of Bones was more like a series finale? It wrapped everything up fairly neatly didn’t it with the shock decision of Brennan (Emily Deschanel) and Booth (David Boreanaz) to quit their jobs and just enjoy their life together as they near the birth of their second child. We didn’t think they’d go through with it but it looks like they did.

Elsewhere in the episode Angela (Michaela Conlin) and Hodgins (T.J. Thyne) decided against going to Paris and decided to stay at the Jeffersonian much to Cam’s (Tamara Taylor) relief. Also there was the creepy video tape from Pelant (Andrew Leeds) following the copycat murder but we didn’t get to hear what he had to say as Brennan turned it off midway through.

Without Brennan and Booth can the Jeffersonian team continue? Well it’s inevitable that the two characters will be back in some capacity but whether or not it’s in their old roles remains to be seen. We know there will be a time jump between the seasons and that in that time Brennan will be replaced.

As we eagerly await more news of season 11 we’ve compiled our Top 10 things that we want to see when the show returns later this year.

1. Brennan and Booth to come back. Of course we know they’re going to in some capacity and we hope that it takes a little while for them to integrate back into the team but we can’t imagine watching the Jeffersonian team solving cases without them.

2. Brennan and Booth’s relationship to be stronger than ever. The heartbreak of their temporary separation was tough for long-time fans of the show. Booth’s gambling addiction pushed the two apart but by the end of the season it looked like they were ready to put their marriage first. With the birth of a second baby and some time away from their jobs, we want to see their relationship renewed when the show returns.

3. Angela to be the catalyst for Brennan’s return. There’s no doubt that Angela holds a lot of sway with Brennan so we’re hoping that she drags her friend back into the team. Maybe she can call her off the record for some consulting to reinvigorate her passion for her career?

4. Brennan to compete with her replacement. We know she’s going to be replaced and we also know that Brennan always thinks she’s the smartest person in the room. It’s going to be interesting to see Brennan meet her replacement and deal with the fact that she is replaceable. It’ll be a blow to her big ego but it’s sure to bring comedy gold to season 11.

5. Cam and Arastoo (Pej Vahdat) to get married. It feels like now is the time for them to take their relationship to the next step, especially after Cam went to the Middle East with Booth to save Arastoo. They’ve had issues to work through but Cam is going to be leaning on him more than ever after the shock of Booth and Brennan’s departure.

6. More Caroline Julian (Patricia Belcher). We LOVE Caroline and only getting her for 6 episodes in season 10 was pretty rubbish. She’s always been the secret weapon of the show and we’d like to see her working side-by-side with Aubrey (John Boyd) in Booth’s absence.

7. Aubrey and Jessica (Laura Spencer) to explore a romance. They came close in season 10 and it’s obvious that Aubrey is enamoured with the squintern. They have a great chemistry together and Jessica has grown on us. Plus they produce great comedy scenes together don’t they?

8. More Wendell (Michael Grant Terry) and Daisy (Carla Gallo). We know that the squinterns have to share their job so they can only appear in a handful of episodes but these two are our favourites. Maybe one of them can step up now Brennan has gone and take on a more permanent role at the Jeffersonian?

9. Some darker cases. Pelant and The Grave Digger have been the best cases on Bones to date and we love it when the show gets dark. We want some proper edge-of-the-seat cases and fewer of the run-of-the-mill murder of the week ones. If there’s a time to shake things up it’s when you’re 11 seasons down the road right?

10. Perhaps a new squintern or two. We’re going to be honest here – we’ve not loved all of the squints and we’ve tried (but failed) to love Dr. Oliver Wells (Brian Klugman) and Rodolfo (Ignacio Serricchio). Jessica has grown on us, mostly thanks to Aubrey, and Clark, Wendell and Daisy are classic squints. We’d like some new characters to inject some fresh energy into the show.

Bones will return in the US to FOX and the UK to Sky Living HD this autumn.

Advertisement. Scroll to continue reading.
In this article:Bones