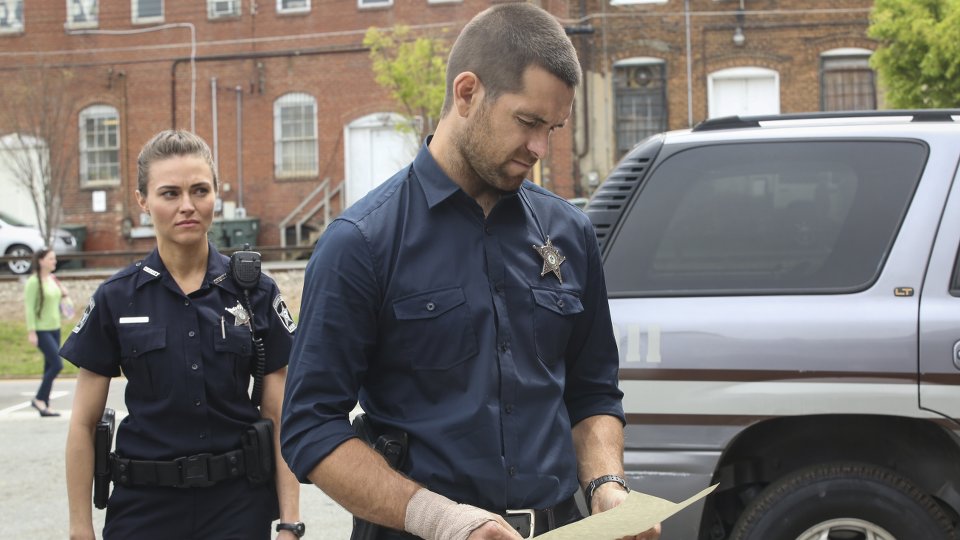 Battle lines were drawn and territory marked in tonight’s episode of Banshee as tensions reached an all-time high.

If you haven’t seen the latest episode of Banshee and don’t want any spoilers, we suggest you stop reading now. If you have seen it and want to relive the action then keep reading.

A nice day for a heist

Carrie, Hood, Job (Hoon Lee) and Sugar (Frankie Faison) continued to plot their military base heist and Job discovered that the base was hiding a lot more money than they were letting on. He pinpointed Colonel Stowe as the man manipulating the books, which made Carrie feel a little uncomfortable. Not too uncomfortable though as she got together for a bit of slap and tickle at a motel. Whilst in the midst of getting their freak on, Carrie told Stowe to stop telling him she had to put her kids first.

As she left the motel, Carrie found in her car and he expressed concern that she was involved with their target. She assured him she’d broken things off and that there wasn’t a conflict. Not before getting a bitchy comment in about Hood’s relationship with Deputy Siobhan though.

Carrie and Hood entered the base together through an underground tunnel. Job helped them navigate to the vault. As that was happening Colonel Stowe was interrogating/torturing one of his men whom he believed was leaking information. Hood got called away by an incident at Proctor’s house leaving Carrie to finish the job.

Proctor (Ulrich Thomsen) arranged a meeting to talk to a rival meat supplier who had been servicing his area following his unfortunate time behind bars. After asking nicely, Proctor was surprised to get resistance but when one of the men started shooting his mouth off Rebecca (Lili Simmons) pulled out a gun and fired two shots into his knees. That led to an all-out gun fight with Proctor coming up trumps as his enemies lay dying on the floor. Rebecca finished off the last of them and it looks like she’s taking after her uncle…

Following that pleasant incident, Kai returned home to see his dying mother. He was told repeatedly that he wasn’t welcome but he ignored the protests of his former people so he could be by his mother’s side. He took her from the community to the local hospital and found out she had a month to live.

Chayton Littlestone (Geno Segers) oversaw the training of the Kinaho tribe and tried to keep his brother Tommy’s (Ricky Russert) enthusiasm under control. As night drew in, Chayton found Nola (Odette Annable) in his lodgings and the two shared a tense exchange. In a flashback we saw that Nola had a history of drug abuse and it looks like she tried to kill herself. Nola and Chayton argued over how best to avenge the death of Alex (Anthony Ruivivar).

Hood arrived to find out what had happened but Rebecca refused to speak. Brock (Matt Servitto) was called away from his angry ex-wife shortly after they’d been having sex leaving her fuming. He was courteous to Hood, who was telling Proctor that he had started the war by killing Alex (only it wasn’t him remember, it was Rebecca).

Hood and the team went to speak to the Kinaho tribe with his new deputy Billy Raven (Chaske Spencer) getting taunted by his former people. A fight broke out which was stopped by Aimee (Meghan Rath), a Kinaho detective, who told them they should leave. Instead Hood and Billy went to see the Kinaho sheriff who wasn’t happy to see them.

Dirty work at the diner

Carrie (Ivana Milicevic) got a few surprises in the diner this week but not all of them were pleasant. Her first however was pretty steamy as her lover Colonel Douglas Stowe (Langley Kirkwood) took her into the diner kitchen, felt her up, pulled her knickers down and pleasured her before leaving saying ‘I’ll catch you later’. Nice.

Later in the episode Carrie was confronted by the man she punched in the last episode. He arrived with friends ready for revenge but was interrupted by Nola who assaulted him and sent him on his way. Nola and Carrie then shared a frank exchange and a piece of pie.

There’s a new deputy in town

Hood (Antony Starr) and Siobhan (Trieste Kelly Dunn) kicked off the episode by mulling over the prospect of living together but their conversation was interrupted by Neo-Nazi Kurt Bunker (Tom Pelphrey) who was waiting on the sheriff’s station’s steps to apply for the vacant position of deputy. Siobhan didn’t take him seriously, but he pleaded with them saying he had cut ties with his former allies and was getting his tattoos removed. Hood told him the position was filled but admitted to Siobhan he kind of liked him.

Gordon (Rus Blackwell) tried to keep Alison (Afton Williamson) off his back after she kept pushing him to find out if he was still using drugs. Later on Alison arrived at Gordon’s new apartment to find that he hadn’t unpacked and he was drinking during the day. When Gordon tried it on with Alison, she refused to stay and left as he was washing down another drink.

Proving he was still spiralling, Gordon had a call girl over for the evening but then changed his mind when she started to strip off.

Deva (Ryann Shane) visited Hood in a bid to get to know her father. He told her to go to Gordon as he had been the real father in her life. After she left there was a knock on the door and someone had a gun cocked and ready leaving Hood a little worried.