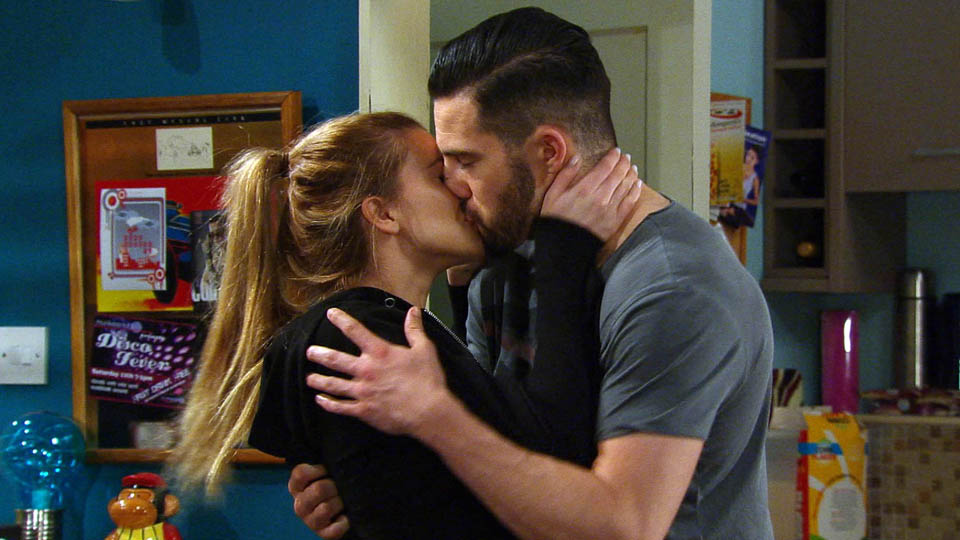 It’s going to be another emotional week in Emmerdale.  Read on to find out what’s in store for your favourite soap characters.

Debbie torn between Ross and Pete

Debbie has barely been able to hide her jealousy over Ross seeing Carly, so when the pair double date with her and fiancé Pete, things are bound to get interesting.  However, before that Debbie realises that Ross is still in debt to Charlie, but Ross tells her to keep her nose out.  Later, on the double date, Debbie and Ross leave Pete suspicious with their shared glances.

Next day, an unwanted stolen car has been left at the garage by Charlie which sends Ross frantically trying to get rid of it before the cops turn up.  Brooding Pete starts watching Ross and Debbie together and egged on by stirring Emma, he asks Debbie if she’s sleeping with Ross.  Debbie denies everything and instead Pete goes off in search of Ross, but when he can’t find him, he hatches a plan to frame him.  As he waits for it to blow up in Ross’ face, he tells Debbie that Ross is about to get his comeuppence.

Zak tells Cain he thinks that Ross stole his betting winnings and they go on the hunt for Ross to get answers and their money back.  Meanwhile, Emma tells James that she’s warned Pete that Debbie and Ross are up to something and James immediately guesses what Pete has done.  Debbie searches Ross’ car and finds the stolen money and the pair soon realise that Pete must have set him up.

Later, Pete and Debbie argue and the row sends Debbie straight into Ross’ arms where they share a kiss.  Desperately confused about her feelings for the Barton brothers, Debbie goes to visit her mum, Charity, in prison who is shocked by her daughter’s revelation.  Unfortunately their time is cut short by the end of visiting hours, but it seems Charity has her own bombshell to drop.  Whilst Debbie tries to cope with her mum’s bombshell, which brother will she turn to for support; Ross or Pete?

Victoria and Adam go on the run

Newly engaged couple, Victoria and Adam are feeling the pressure this week with Robert threatening that he’ll send Adam to prison if it saves Vic from marrying him.  Adam’s mum Moira is also struggling with the news.  Victoria warns Robert that his threats are useless and if she has to make a choice, it will be Adam every time.

The pair decide to do a runner and soon Robert and Andy realise what they’re up to and are in hot pursuit, but to no avail.  Aaron, Robert and Andy are soon covering up for the pair with Diane and Moira, not wishing to raise alarm bells and get Vic in more trouble with the police.  Harriet is thrown when Robert asks to hire her to track down Victoria, saying that she can name her price.

Rachel is irked when she receives a letter telling her to attend a mediation for Archie and is annoyed that Jai is going for full custody.  When Megan learns what he’s doing she questions why he is in such a rush, unaware that he’s planning to leave her for Leyla once his has Archie.

With Rachel vowing to keep full custody of their son, Jai gets nasty.  After an argument about failing to agree on custody, Jai threatens to kill Rachel, sending her running scared.  Little does he know that Leyla heard everything and Jai has to talk her down and explain that he would never harm Rachel.  With Leyla remaining alarmed he confides that he has a plan – he spikes Rachel’s drink in order to make he miss the meeting.

Kirin flaunts his date in front of Vanessa in The Woolpack and later in the week throws a party where things get out of control and he makes a move on Priya.

Ashley is struggling to come to terms with the fact that he now has epilepsy after he has another seizure.

Bernice continues to lie about her imaginary boyfriend, Crispin, to Jimmy and Tracy, but Tracy smells a rat and decides to push the issue.

Val puts plans in place for a birthday surprise for Eric’s 70th, but will it go to plan?

James gives Emma hope that their relationship could be rekindled.