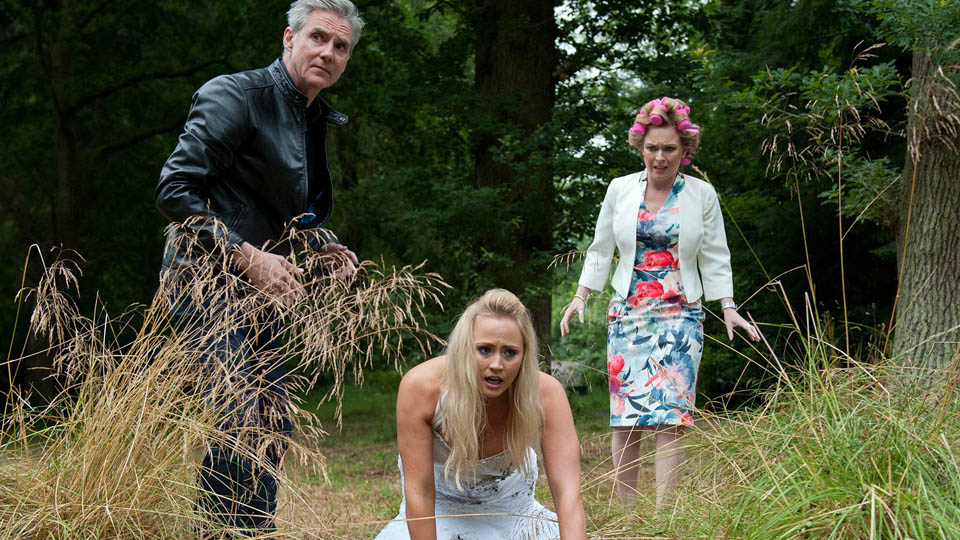 Here’s our weekly look ahead to what’s going to happen in Emmerdale.  Robert tries to get revenge on Chrissie, Holly and Jai get a little closer and there’s a runaway bride of sorts!

Will Frank stop Tracy getting wed?

Tracy is worried that David has changed his mind about marrying her and confronts him in the shop.  He tells her he’s worried about his test results the next day and tells her that if the cancer is back he won’t be able to go through with the wedding.

Later, at the hospital, Tracy vows to stand by David whatever the outcome of the results but it looks like she needn’t have worried;  David is given the all clear!  He reassures Tracy that he does want to marry her after she’s worried that it was the cancer urgency making him want to get wed.

Leyla, Carly and Vanessa plan a joint hen/stag do at the pub for the pair and Tracy is angry that Frank turns up and tells him to get lost.  Outside the pub he confides in Eric that he wants to make things up with Tracy and gets the sharp end of Eric’s tongue.  Meanwhile, inside the pub, David suggests Tracy head home but she can’t leave without attacking Frank’s car outside.  As she confronts him, he tells her he’s taking her for a ride and drives off with her in the back seat.

Tracy is furious when she wakes up in Frank’s car in the middle of the countryside.  The battery is dead and when she sees the time she freaks out and calls Vanessa to come and pick them up.  Frank continues to show Tracy how he feels about her by showing her he carved her name in a tree when she was being born.  She’s unimpressed and panics she’s going to miss her own wedding!

As she frantically tries to change into her wedding dress in the back of Vanessa’s car, it looks like things are getting worse as she accidentally disengages the handbrake.  As she gets out of the car, they are stunned to see it roll back into the water!  How will she get to the church now?

As Tracy tries flagging down a ride, Frank pulls up in a tractor and the girls get on.  Back at the church, Harriet tells a frantic David that she can’t hold the church much longer.  Will Tracy make it?

When Robert overhears Priya threatening to sue Chrissie over faulty equipment in the adventure park, a plan starts to form in his evil mind;  he challenges Chrissie to be the first person to test out the adventure park.  She takes the challenge, but is it as straight forward as she thinks?

It seems Robert’s scheme might be about to backfire, when Victoria agrees to take Chrissie’s place as the first one up the climbing wall at the opening event.  Robert panics and sneaks back in to fix a safety wire that he’d earlier rigged but as he climbs the wall he slips and ends up left hanging upside down and half way up the wall.  He manages to call Victoria and when she arrives he confesses all about Chrissie setting up Andy and it leaves her seething with rage.

Later, she learns that Chrissie isn’t Lawrence’s biological daughter, but what will she do with this information?

Is Holly falling for Jai?

Jai has been very supportive of Holly and her drugs problem and it seems the bond between the pair is growing.  It looks like the pair are about to share a kiss when Moira returns and Jai quickly disappears.

Later, Jai has a touch of the green-eyed monster when he sees Holly getting attention from the sound technician setting up the wedding reception.  He asks Holly out on a date, but she lets him down, making eye contact with Jai as she does it.  It looks like Jai has got the message and the pair share a kiss behind the pub.  Could it be the pair are caught in the act as Megan approaches?

Next day, Jai and Holly meet for a date in the café but realise it’s all a bit too public and agree the next date should be somewhere more discreet.

Dan let’s Zak and Joanie in on his secret plans to propose to Kerry and gets Jimmy and Bob to help decorate the pirate ship ready for him to pop the question.  They are intrigued when he gets a call from Celine Dion.  Will the proposal go to plan or sink like the Titanic?

Jimmy accidentally joins a bereavement group thinking it’s a toddler group.  Too embarrassed to leave he ends up telling a web of lies and agreeing to a picnic date with one of the women in the group!

It’s a case of Chinese whispers when Carly gives Finn a message to pass on to Pete about hooking up with Leyla at the wedding.  Soon things are very confused and Leyla is left to explain what’s happened and Finn is in the firing line!

Priya tells Jai her eating disorder is back and he is determined to help her get through it this time.

Lawrence and Ronnie realise Chrissie has intentionally involved Ronnie with the expansion of the adventure park to keep him around and Lawrence is secretly pleased.

Can Chas talk Paddy out of his ridiculous siege at Rhona’s place?