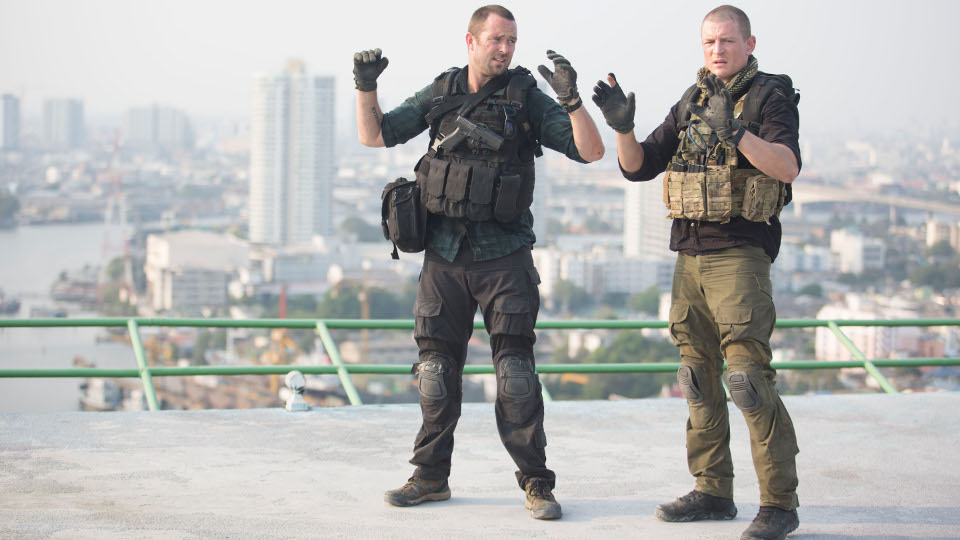 After almost two years of waiting Strike Back finally arrived back on our screens last week for its fifth and final series – Legacy. Series five wasted no time on making good on the promise to be bigger and better with a thrilling first episode.

The episode began on a gorgeous beach in Bangkok, Thailand where a dance party was taking place. Chloe Foster, the daughter of the British Ambassador Robin Foster (Tim McInnerny), was kidnapped by a gang and held to ransom.

Everything about the rescue was wonderfully over the top as we’ve come to expect from Strike Back. From Scott and Stonebridge popping up out of the water below the enemy hideout to pursuits on jetski and dirt bikes that have you on the edge of your seat. There was also plenty of explosions, gunfire and hand-to-hand combat sequences.

The baddies led by Ray McQueen (Max Beesley) escaped with Chloe and Section 20 needed to regroup. McQueen stepped things up by cutting off one of Chloe’s fingers and sending it to her father. Annoyed at their failure Robin decided to take matters into his own hands and was told by McQueen to bomb the North Koreans at the British Embassy.

Section 20 then headed to McQueen’s nightclub and sent Richmond in to gather intelligence. Unfortunately she was recognised by McQueen who knocked her out. Scott and Stonebridge went to her rescue but McQueen escaped again and his cousin gave the pair a beating.

Thanks to planting a tracking device on McQueen they managed to hunt him down and rescue Chloe. Unfortuantely it’s too late for Chloe’s dad who went ahead with the bombing at the embassy. We’ve got a feeling the North Koreans aren’t going to be best pleased with the British.

The official synopsis for Episode 2 reads:

[quote]Section 20 try to track down the real culprits behind the embassy attack, starting with getting information from gangster Ray McQueen (guest star Max Beesley).[/quote]

Episode 2 looks like it might just be even more action packed than the first. The teaser at the end of the episode showed Scott and Stonebridge climbing what looks like a hotel. There’s also plenty more explosions, fighting and shooting in store.

Preview the episode with our gallery below:

Read our recap of Strike Back: Legacy – Episode 2 and preview of Episode 3.

Strike Back: Legacy continues Wednesday June 10th at 9pm on Sky 1 and will air in the US on July 31st on Cinemax.