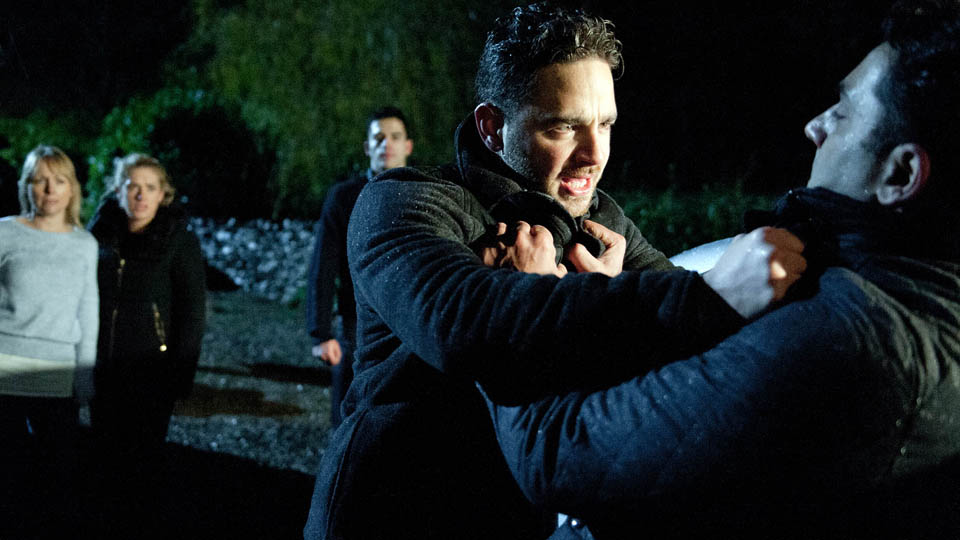 Let’s have a look at what’s going to happen in Emmerdale this week shall we?  Read on to find out more about the aftermath of Johnny’s real father being revealed and much more…

Rakesh believes he’s lost Kirin forever and will not get to spend any time with his grandson Johnny, but Priya insists he’s done the right thing.  Meanwhile, Adam is determined to find out how the mix up happened in the first place with the original DNA results that said he was the father.  When he finds out Rakesh doctored the results letter he is fuming and warns that he’ll make Rakesh pay for his meddling.

Vanessa is stunned to learned that Priya knew the truth all along as Rakesh tries to explain he was just trying to protect his son and offers to do anything to make amends.  Soon Adam can’t help himself and punches Rakesh square in the face.

Kirin accuses Priya of being just as bad as Rakesh causing her to move out, telling Rakesh she needs some space to work things out.  Rakesh is shocked when Rishi tells him Priya might never come to terms with what he did to Kirin and Vanessa.

Chrissie suggests to Rakesh that he needs to make a big gesture to show Priya that she can still trust him and he heads off, a man on a mission.  Will his plan have Priya back in his arms or will he push her away forever?

With Cain giving her the cold shoulder over Debbie leaving, Moira is glad to have the support and ear of Pete, but it looks like Pete might be developing feelings for her.  When he sees Cain in the pub, he decides to give him some words of wisdom on being a better husband;  not something Cain takes well!

Cain tells Moira about what Pete said and it causes them to have another row and as Cain stomps off Moira vents her anger by throwing a mug at the door.  She later gives Pete a kiss on the cheek to thank him for trying to stick up for her with Cain and is shocked when he moves in for a full on snog.

Later, Moira tells Cain about Pete making a move on her and braces herself as Cain’s temper flares.  He warns Pete to stay away from Moira leaving Ross laughing at the idea of his brother making a move on his aunt.  Finn doesn’t see the funny side as he comforts Pete and is alarmed when he tells him he just wants out.  Just what does Pete mean?

Rhona puts Tess in an awkward position when she asks her to be a referee for her and Paddy’s adoption panel.  How can she refuse?  She’s left forcing a smile and being a little lost for words when she tells the social worker that Paddy, Rhona and Leo are the perfect family.  Meanwhile, Aaron gives the social worker a glowing review of the pair.

Rhona is confused when she hears a phone beep in Paddy’s coat pocket but can see his phone is out on the counter.  He quickly covers and says it was Aaron’s phone and pleads with his eyes as he hands it back to him in front of Rhona.  Aaron accepts the phone but threatens Paddy to tell him what’s going on or he’ll tell Rhona it’s not his phone after all.

Aaron is left reeling when Paddy fills him in on his affair with Tess and is angry that Paddy is doing this to his family.  Paddy tries to justify the affair as a stupid mistake and that the adoption will make his life complete but is Aaron buying it?

Rhona receives news from the social worker of a bad reference and wonders who has done that to them.  Pearl fears she may be the guilty party and confesses that she told the social worker about Rhona’s lesbian phase.  Paddy is left feeling guilty as he thinks it’s to do with the affair.

Jimmy and Nicola’s family grows when he is asked to look after his son Elliot and then Carl too.  Nicola is far from pleased, but will a heart-to-heart with Laurel help get things in perspective?

Lisa suffers an angina attack and Belle sees an opportunity to try and reunite her parents only for Joanie to interfere.  She takes drastic action to convince Zak to talk to Lisa.

Diane senses a connection between Robert and Chrissie and gives the latter her blessing should she want to rekindle things, but is thrown by Chrissie’s response.

Chas lies again to Aaron so she can sneak away for the night with her old flame Gordon.

Kerry uses her eye as an excuse to get out of work at the Salon only to be rumbled.