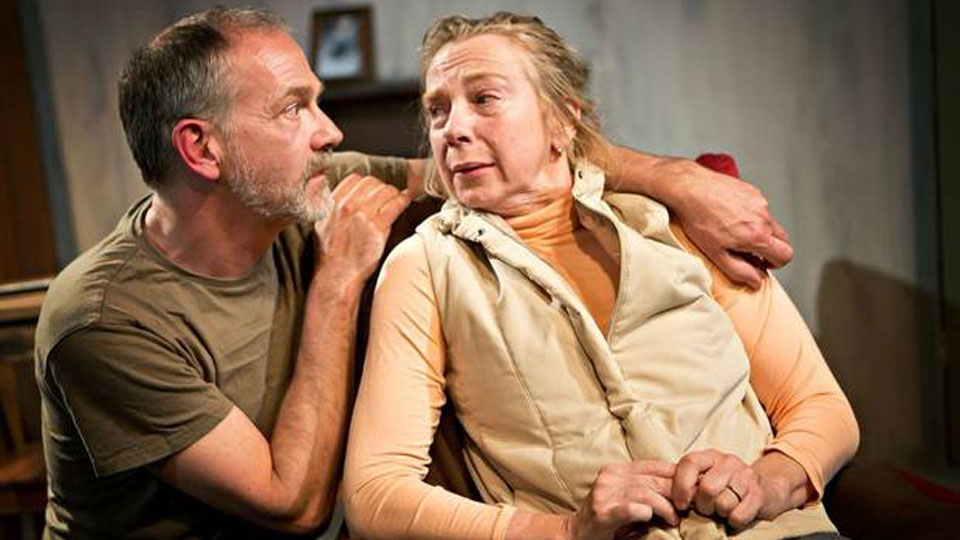 The Dogs of War, playing now at the Old Red Lion, is a fascinating piece of new writing. If you fancy a quirky, surreal take on a domestic drama, we strongly recommend trying this tight, tense and well-played show.

Johnny (Richard Southgate) is home from university, but his parents (played by Maggie O’Brien and Paul Stonehouse) have recently moved to a remote house in the Northern Irish countryside where internet connection is slow and their shared past requires a thorough sort out. They’ve moved there to find peace, and it doesn’t take very long to realise that mam isn’t entirely rational and sane; giving clues that their problems can’t be run from. When their lively dogs pester their neighbours’ livestock and money becomes uncomfortably tight, the cracks in the family start to show as the walls of their domesticity tumble down.

The Dogs of War is to be commended for approaching the topic of mental illness with great candour. Mam, who suffers from mental health issues, is a complex, troubled character, often hurting those closest to her. Johnny shows real anguish at the dawning realisation that he may have inherited some of his mother’s problems. The subject matter works dramatically too: the audience is cleverly played with over the three family dogs – are they all part of mum’s imagination, and dad goes along with her fantasy – or is there a reason Johnny can’t see them? More fundamentally, who is telling the truth? This is a terrifically unsettling play, and eerie music by DIVISIONS adds greatly to the atmosphere of the piece.

The show benefits from a terrific cast, but Paul Stonehouse deserves especial praise for his portrayal of dad – a patient, decent man gradually worn down by circumstances. Maggie O’Brien’s mam is more of a showy part, and she is especially good at slyly undermining her family, but oddly lacking complete conviction in moments of outright anger. Richard Southgate impresses as the troubled and cagey Johnny, who has enough of his own problems to give his parents much sympathy; and Melanie McHugh gets to play dual roles, differentiating them effectively.

The Dogs of War doesn’t use a straightforward narrative, but takes some sideways lurches into Johnny’s mind. However, we found these aspects the least effective moments of the show, with adventures in antiquity related to, but distracting from the main story. Mam remains a more effective character than Johnny for remaining an enigma to us. Nevertheless, for a first-time playwright, Tim Foley’s story is rich, intriguing and populated by characters we care about. There are moments that are sinister and creepy; yet there’s a jet black humour at the heart of it too.

With a good cast bringing an interesting script to life, there’s plenty to enjoy about The Dogs of War, not least its original and thoughtful story. There’s some hair-raising drama to be savoured here.