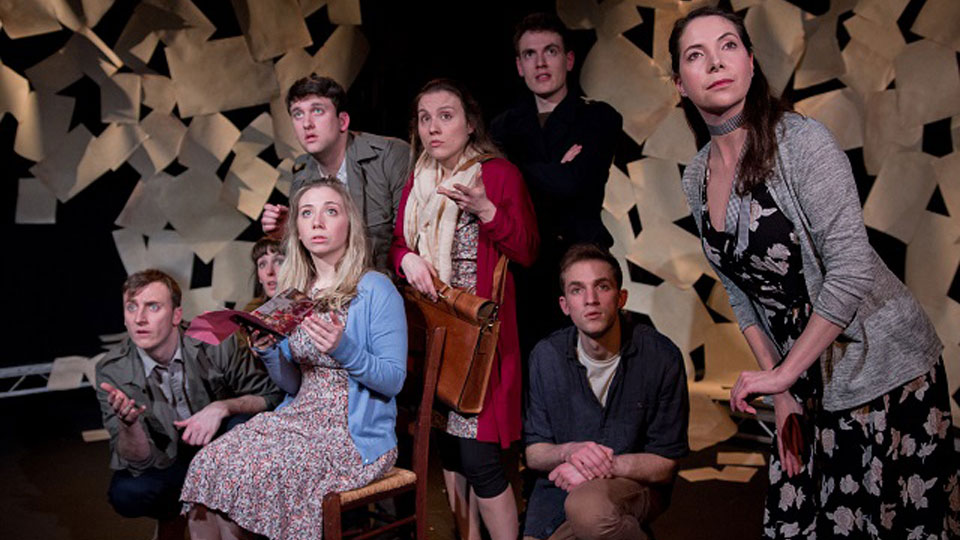 The Althea Theatre ensemble electrified Islington last night with the
overwhelmingly energetic One Last Thing (For Now). So animated was the
production, I was left feeling as exhausted as the cast by the time the show
ended (over two hours after it began). Like a raucous Irish wake, it was an
unexpectedly lively event, with some questionable characters and little
space for reflective thought.

Inspired by love letters penned during wartime, eight actors from across the
globe each delivered a multitude of roles to interlace eight tales of love,
loss and dark secrets. Using mime, props, music and sound-effects, the
impressive cast jumped back and forth through time and continents, from
lovers to victims, in a vibrant, cross-cultural exploration of how and what
people communicate in times of war.

The minutes whizzed by at breakneck speed and there were moments when the
production seemed as busy as the heaving bar beneath us in the Old Red Lion
Pub. An exhilarated audience was forced to cling on for dear life as scene
after scene unfolded, merged and collided before our eyes.

As the show progressed, a vine of universal messages about the emotional and
physical impact of war was tightly bound from WWI all the way up to the
conflict in Afghanistan. It was a gripping ride but the poignancy of the
overarching narrative was diluted to remove any possibility of a lingering
aftertaste.

The powerful words which had originally inspired director Lilac Yosiphon to
co-write the play with the cast were rendered impotent by a lack of
reflection and silence on stage. Instead of jamming a wrench in my gut, I
felt indifferent by the end of the performance. I should have felt guilty
for my lack of compassion yet I felt grateful. It was nice to travel home on
the tube without the kind of swollen eyes that would cause my fellow
commuters to assume I’d just been dumped by a fiancée. More importantly, I
found the whole show, even with its flaws, strangely entertaining!

The young, international cast offered a multicultural experience, speaking
Russian, French, Spanish and English and there were several standout
performers, led by Carolina Herran and Josephine Arden. I loved Elliott
Squire’s set – a plain, black stage with overlapping sheets of blank paper
creeping across the walls and ceiling, ready for unshared words still
begging to be written. It was a haunting contrast to the colourful throng of
characters, endlessly exchanging correspondence while closely guarding their
secrets.

Sound Designer Mark Sutcliffe, along with music composers Sam Elwin and
Thomas Wingfield, punctuated the dizzying jumps between characters and
stories with a brilliant soundtrack, mixing music with chimes, bells and a
few surprises!

The show is a bold undertaking and would have been flawless with a little
more restraint. Instead, it succumbs to over-ambition, cramming too many
stories into too many scenes with too many actors vying for attention. With
less characters and a few careful edits, it could be a five star experience.
Still, transforming such sombre themes into such an energetic, entertaining
production took great skill and I admire the courage and vision of Yosiphon
and the Althea Theatre.

One Last Thing (For Now) is imaginative and passionate – a super-charged
show that promises great things to come from all involved. Last night’s
applause continued long after the cast had left the stage confirming that it
may not be a perfect experience, but it’s perfectly enjoyable.