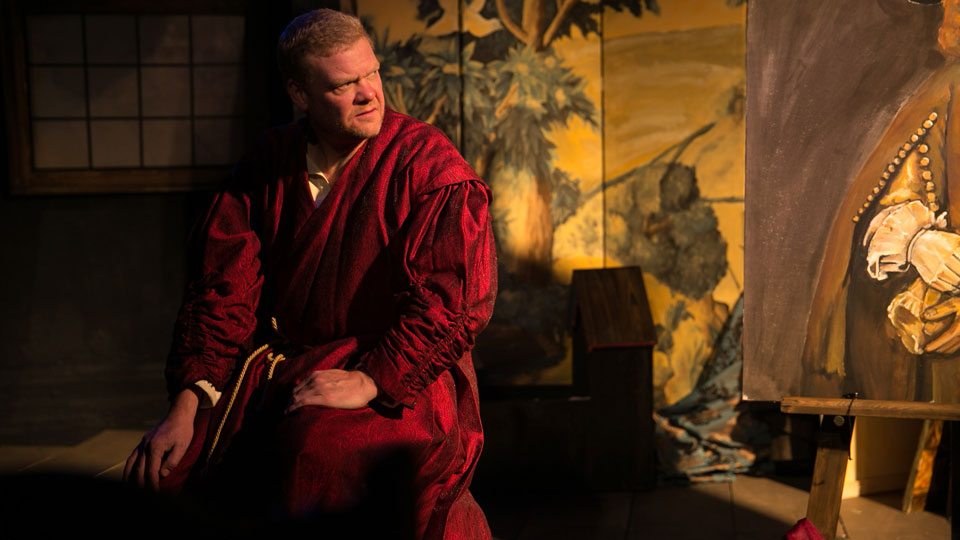 Asking Rembrandt is a thoughtful play that examines the strained relationship between the artist and his paying customers, and the unfortunate necessity for geniuses to eat and pay rent.

Told in modern English through witty, succinct dialogue, Asking Rembrandt imagines the circumstances around the Dutch Master painting the portrait of his friend Jan Six – a remarkable work that uses hints of impressionism (seemingly unfinished ‘blurry gloves’) that was way ahead of its time. The piece also asks questions about the tension between the sitter, who wishes to be flattered and have his preconceptions met; and the artist, who is prepared to risk the friendship to push the boundaries of his craft.

Steve Gooch’s play gently probes at these questions, and anyone who has ever dabbled with painting (in particular) will find a lot to enjoy in the intelligent examination of the life of the artist. Liam McKenna is impressive as Rembrandt, instilling in his portrayal plenty of paradoxes as he gets beneath the skin of the painter. At times brutish and pig-headed, he humanises Rembrandt, and is effective when allowing us to see the sensitivity beneath the brusque exterior. John Gorick also rewards as the suitably contrasting Jan Six, rather more sophisticated and guarded in his tongue, and more than a few rungs up the social scale compared to Rembrandt. The gradual yet seismic shifts in their relationship is the major success of the whole piece.

Religious hypocrisy and bullying is a secondary theme that emerges in Rembrandt’s relationship with Henni (a touching and humorous performance by Esme Patey-Ford), with whom he conceives a child out of wedlock. Unable to shake off the love for his dead wife, and unconcerned by society’s rules and expectations, Rembrandt doesn’t marry Henni, and this leads to problems with the authorities and with his partner. This subplot could, perhaps, have been teased out a little more, since it is apparently resolved quite easily, and in the same way, twice.

This leaves Asking Rembrandt a slow-burner and a character study. Thankfully, the characters are well-written enough and ably brought to life by a talented cast, so the story is absorbing, and it undeniably picks up in pace and intrigue in the second act.

Also a word on the great design work. Alex Marker does a commendable job on recreating Rembrandt’s studio, whilst Philip Jones’ lighting, often glancing off rich fabrics, captures the feel and essence of Rembrandt’s work. The only downside is the prop paintings, which require something of a suspension of disbelief: though we concede that using the originals would have been a tad unrealistic.