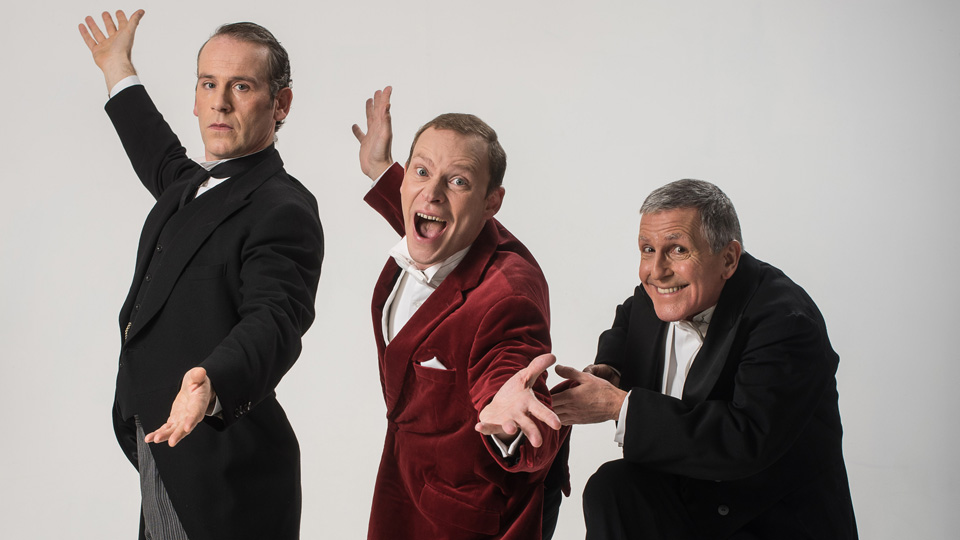 P.G. Wodehouse’s celebrated creations Jeeves and Wooster show up at Leeds Grand Theatre this week in Perfect Nonsense, a West End transfer from the pens of The Goodale Brothers.

Perfect Nonsense establishes the façade of an amateur one-man show, fronted by Bertie Wooster as he attempts to re-enact the events of a purloined creamer (in the shape of a cow) whilst being seduced by his friend’s soppy fiancé. Struggling to play all of the diverse roles alone, Bertie ropes in his ever faithful butler Jeeves and the long-suffering Steppings, a doddery manservant.

Despite being based on Wodehouse’s The Code of the Woosters, Bertie’s recollection of events is knowingly hokum and confusing. In truth, the thrust of the show entertains its audience through an anarchic presentation of the mechanisms of amateur theatre. Metaplay at its best, Perfect Nonsense places Wooster, Jeeves and Steppings into a series of highly staged sequences where the two valets are run ragged on stage, ducking disaster whilst pulling off incredible feats of performance.

The absurdity of Perfect Nonsense is achieved through the knowledge of the entire ensemble being performed by three persons; seemingly impossible odds as both Jeeves and Steppings have to play themselves in several scenes, as well as a host of other characters. The situation isn’t at all assisted by Jeeves barely contributing to the ensemble, save for playing himself with a hilarious egotism. It is the ever-ready valet Jeeves who often saves the scenes from complete calamity through ingenious mental and physical triumphs. In short, Perfect Nonsense is a theatrical farce where the show is seemingly held together by a thread which is coming very close to snapping.

Robert Webb, a performer with a superlative record in comedy, appears as Bertie Wooster in a performance which leaps from Wodehouse’s stories in living colour. Vain, ignorant, daft, well-meaning and awkwardly immature, Webb’s realisation of Wooster is wholly authentic, bringing a nasal-flaring prattishness to a figure which is instantly endearing. Jeeves is equally well-realised by Jason Thorpe in a study of saintly patience and industrious intelligence, flipping between dignified butler to reluctant drag act in microseconds. Thorpe channels an essential quality of Jeeves as the straight man with the best lines, delivered with sardonic wit and stiff integrity. The lesser known character of Steppings is played by television legend Christopher Ryan, in a performance which borrows from Chaplin in its desperation to prevail against the odds. Tirelessly energetic yet furtive, Ryan elevates Steppings to a level which truly makes the show feel like a three-hander of equal character with treble hilarity.

Jeeves’ homespun scenery is superbly realised by designer Alice Power, showcasing impressive revolving sets (naturally powered by Jeeves on a bicycle) beside quaint amateur effects such as stuffed dogs on puppet rods and flaming fires fashioned in flickering red felt. Perhaps analogous for the entire play, the production’s anarchic presentation is utterly flawless, showcasing choreographic farce as perfected acts of randomness. Sean Foley’s direction is well engineered to conceal any real workings of the mechanics of the production, exemplifying the standard required to make farce feel so tangibly real. Incidentally, a beautiful detail was the inclusion of a musical motif from Chaplin’s Limelight – a film, no less, about being a clown on stage.

Only a hard heart could deny the fuzzy warmth and knowingly daft world which Perfect Nonsense provides. Irresistibly silly, it’s classic comedy without cruelty, harking back a gentler era. An evening full of plummy anecdotes and vintage slapstick, seeing Jeeves and Wooster on stage is like revisiting old friends. Be sure to catch up with them soon.