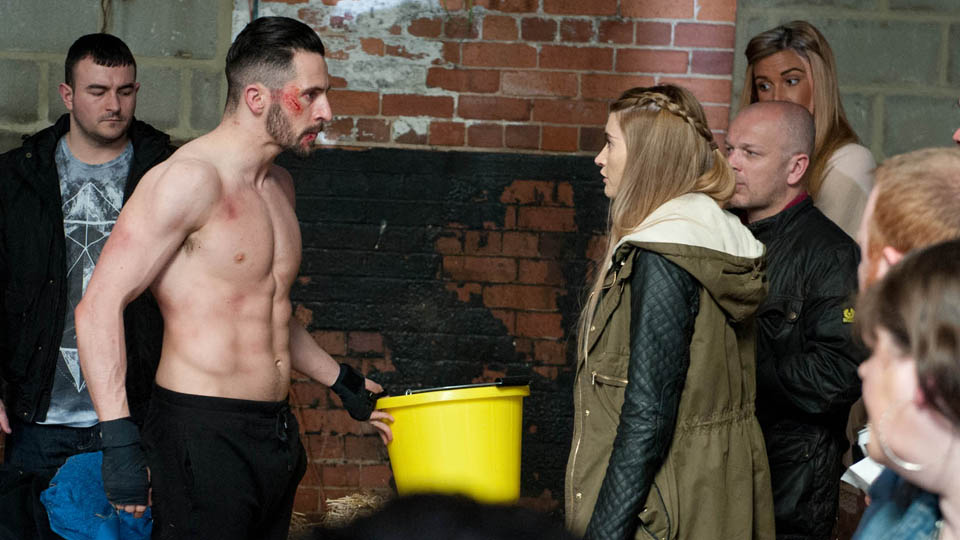 Want to know what’s going to happen in Emmerdale this week?  Well you’ve come to the right place.  Read on to see who’s throwing punches, who’s having a dna test and who we’ll be waving goodbye to.

Debbie is increasingly worried about Ross and tells his brothers all about his upcoming bare knuckle bout, begging them to help her find him and stop him going through with it.  When Debbie finds him at the fight site it looks like he’s determined to go through with it.  She’s also shocked to learn that Zak has pawned all Lisa’s jewellery to bet on Ross winning the fight.  As the fight gets underway, Debbie sees an exchange between Ross and Charlie and realises there’s more riding on the fight than meets the eye.   After the fight ends Charlie’s bouncers whisk Ross away and soon after gun shots are heard…

Meanwhile, Pete is struggling with the green-eyed monster over Debbie’s interest in Ross.  She assures him it’s him that she wants, but Pete remains uncertain and confronts Cain over what he knows, only for Cain to persuade him there’s nothing happening with Debbie and Ross.  Can he really trust her?

Paddy puts two and two together when he recognises that Vanessa has morning sickness.  Concerned that their secret is getting harder and harder to contain, Vanessa and Kirin decide it’s time to tell Rakesh.  Understandably worried for his son, Rakesh isn’t happy at all and suggests to Vanessa that she have a termination, but the pair insist they are keeping the baby.

Meanwhile, Adam admits to Moira he had a thing with Vanessa and she worries that the baby might be his.  She gently threatens Vanessa, that she must come clean over the baby or she will.  A frightened Vanessa decides to order a private DNA test and soon her and Adam sit nervously waiting for the nurse to arrive.

Unfortunately, Kirin arrives home early from college, but will he realise what he’s walking in on?  At first he thinks there is a problem with the baby when he sees a nurse in the house, but then Adam’s phone gives away his presence  and Vanessa reveals all.  Kirin is livid.

Jai puts Rachel under pressure and she lashes out

With Ruby due back in the village, Sam and Rachel decide to spend some quality time together only for Archie to have an accident that means they have to go to the hospital.  The doctor reassures Rachel, but when Sam is alone with the doctor he makes a discovery that puts his relationship with Rachel into jeopardy.

Rachel is fearful to tell Jai about Archie’s accident, but he finds out anyway from Lisa and Rachel is horrified when he threatens her with court.  She tries to explain, but Jai continues to push her buttons and soon a fracas ensues which plays into Jai’s hands perfectly and sees Rachel visited by the police.  It seems she’s having a hard time containing her anger lately and a shove of a police officer gets her arrested.

Looks like Jai has got just what he wanted, only Rishi doesn’t see it that way.  Appalled at his son’s behaviour he’s determined to give Jai some home truths.  Jai consoles himself by having a drink with Leyla (who’s miserable about Alicia and Jacob moving to Portugal) and before long it leads to something else.  We thought that flame had been extinguished, but clearly not!

The village wave goodbye to Betty Eagleton, the motor mouth gossip who’s been poking her nose in for years is leaving to be with a new mystery man in Australia.  We’ll miss you Betty!

Laurel attends her first AA meeting and is grateful for Ashley’s support.

Bernice lies that she’s got a boyfriend because Andy thinks she’s hitting on him.

Cain has to console an upset Noah, when Charity says she doesn’t want him to visit her in prison again.