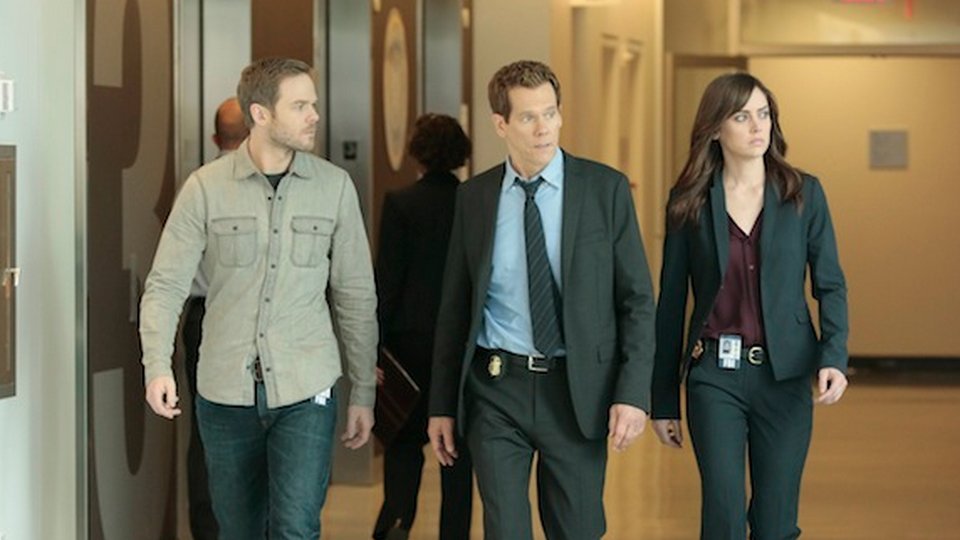 As we come to terms with the end of The Following we’ve been thinking about why the show should have been renewed for a fourth season.

If you haven’t seen the season 3 finale and want to avoid spoilers then we suggest you stop reading now. If you have seen it and want to hear our thoughts then keep reading.

The Following’s season 3 finale was more satisfying than we could have expected it to be given that the episode was already filmed before the show was cancelled. Whilst the episode left plenty of things up in the air, it did provide a degree of closure and we weren’t left desperate to find out what happens next.

Ryan Hardy’s (Kevin Bacon) pursuit of Theo (Michael Ealy) came to an end as he shot the killer before the pair fought leading to them both taking a plunge into a river. We weren’t told whether or not Theo’s body was recovered but Ryan was presumed dead with Max (Jessica Stroup), Mike (Shawn Ashmore) and Gwen (Zuleikha Robinson) all grieving his loss.

What they didn’t know is that Ryan was alive and well, and he was just metres away from them at the hospital as he got information about Eliza (Annet Mahendru) from Lisa (Diane Neal) before killing the rogue agent. Did he get his revenge and put an end to Eliza and her wealthy secret society? We’ll never know.

As we mourn the loss of the show, we’ve put together 10 reasons why we think the show should have returned for a fourth, and final, season.

1. Ryan’s pursuit of Eliza. We were only just getting to know the mysterious Eliza and we got a small glimpse into the twisted world she inhabits. She clearly wields a lot of power and it’s likely that she would have been hunting Ryan just as he is hunting her. The two characters had a face-off in the season finale but Ryan left her alive as he tried to pursue Theo.

2. Ryan and Joe (James Purefoy). Since Joe was executed part way through the season, Ryan had been seeing his serial killer frenemy in his head, which pushed him back into alcohol dependency and isolated him from Gwen. We don’t feel this storyline was resolved at all, and Joe’s absence in the final two episodes was disappointing. We want to see how Ryan would have coped with having Joe as his only ‘friend’ as he hunted down Eliza.

3. Theo: dead or alive. Of course being shot in the head and falling off a bridge into rushing water is enough to finish anyone off but we’re not 100% convinced that Theo has actually died. If he were alive we could see a mutual understanding between him and Ryan to take down Eliza before leading to a final battle between the two.

4. Max and Mike to find out that Ryan is alive. Of course this would have to happen at some point. Ryan needs his backup team and he couldn’t find Eliza without them. We would have loved to see their reactions when they realised that Ryan was alive and see how they subsequently handled keeping his secret so it didn’t jeopardise his latest mission.

5. Claire (Natalie Zea) to come back. Like Ryan, Claire is now a dab hand at staying hidden. With Joe out of the picture completely, there could have been an opportunity for Ryan to reconnect with Claire. At the end of season 2 he wanted to settle down with her but she was reluctant and thought they should move on. We don’t think that they should end up together but it would be nice to see them moving on and reconnecting.

8. Gina Mendez (Valerie Cruz) to return to the FBI. We understand her reasons for quitting but after Daisy (Ruth Kearney) and Theo (Michael Ealy) put her family in jeopardy, we’d hope she realised the importance of the job she did. She’s one of the only people that Ryan actually listens to and we liked her character.

9. More FBI moles. We don’t believe for a second that Lisa was the only person within the FBI to be working with Eliza. Who else is corrupted and helping the wrong side? How did Lisa get acquainted with Eliza in the first place? We know Lisa is now dead but there’s room for more in this storyline.

10. Ryan and Gwen’s happily ever after. If the show had been renewed for a fourth and final season, we would have wanted a real reconciliation between Ryan and Gwen. After all they were having a baby together and she had been a calming and stable influence on him. He promised to quit the FBI for her and after the hell he’s been through we wanted him to get his happy ending.

The Following is available to buy on Blu-ray and DVD now.