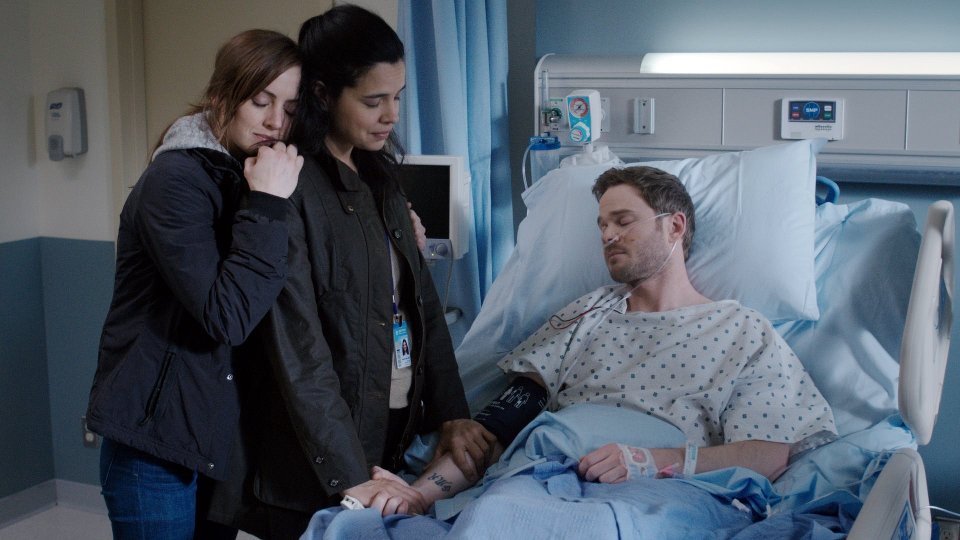 The Following came to the end of its three season run tonight providing a mostly satisfying series finale.

If you haven’t seen the series finale of The Following and want to avoid spoilers we suggest you stop reading now. If you have and you want to relive all of the action then keep reading.

Theo (Michael Ealy) took Ryan (Kevin Bacon) hostage putting him in an underground cell with the injured FBI agent he used to lure Ryan out at the end of the previous episode. Speaking to the agent Ryan discovered that they had been on a four-hour trip from the safe house. Whilst he tried to find a way out Theo spoke with Eliza (Annet Mahendru) who pleaded with him not to kill Ryan and threatened to do terrible things to him if he disobeyed her.

Theo tortured Ryan using similar techniques to what Ryan used on Penny (Megalyn Echikunwoke). He then dragged the injured agent into the room and slit her throat with Ryan looking on helpless. Eliza arrived with her men (she’d used a mole in the FBI to put a tracker in the now dead agent’s watch) and threatened to kill Theo until he revealed he had set up an auto-download with everything he knows about her and her organisation that would be released in the event of his death. Eliza had him tortured to try and find out where the download was so she could stop it.

Eliza then turned her attention to Ryan in a bid to find out what he knew about her and her organisation. Ryan admitted he knew nothing but she didn’t believe him. Ryan broke free from Eliza and he and Theo escaped from the underground bunker. Theo told him that he was going after Gwen (Zuleikah Robinson) and that he would take his unborn child and raise them the way he was raised.

Max (Jessica Stroup) and Lisa (Diane Neal) found blood on the road near the safe house perimeter. They worried that it may have been Ryan’s but Lisa pointed out that Theo would likely have left Ryan’s body for them to find had he murdered him. The FBI managed to catch Theo on a traffic camera and contacted Max at the hospital. They forwarded her the video they found but admitted she couldn’t track it to where he ended his journey. Max noticed a glitch on her feed and checked the original source locating Theo.

Mike’s condition worsened and he was fighting off an infection following an accident during his surgery. Gwen (Zuleikah Robinson) warned Max that things could get worse and started preparing her for the worst. As she waited for more news on Mike, Max had a heart-to-heart with Gwen where she told her that she regretted not telling Mike how she really felt. Gwen confided that she was worried about Ryan prompting Max to tell her that he was missing but assuring her that he would be found. As the news was sinking in, they were told that Mike was stable again but critical. Mike eventually woke up and Max filled him in on what was going on.

As the FBI closed in on Theo, Lisa tipped off Eliza and it turns out she was using her position in the bureau to help her. Lisa was less than pleased when Max reported her findings about the video and she left the FBI to meet her. The two women chased up Max’s findings and Lisa tried to put doubt into her mind to throw her off. It didn’t work and Max spotted the location from the video and found Theo’s car. She told Lisa to call for backup, which she had no intention of doing. Max suggested they split up and ran off in search of Ryan.

Gwen was moved out of Ryan’s apartment and as they were leaving the building Lisa stalled them. That gave Theo time to take out the security detail but Gwen gave good chase. Theo eventually got her and handcuffed her to the inside of his car as he made his escape. Ryan and Max arrived too late and found Lisa injured on the floor but remained unaware of his duplicity.

Max managed to trace the car that Theo was in and Ryan tracked it down in a helicopter. Theo took Gwen to a bridge when they were blocked in by a police barricade. He threatened to kill Gwen if Ryan didn’t let him walk away and Ryan tricked him so that he could get a good shot. He fired a bullet at Theo and the killer dropped to the ground. As Ryan reunited with Gwen, Theo got back up and attacked Ryan with both men following over the bridge. Theo went into the water and Ryan held on but lost his grip and fell into the water too.

Where is Ryan Hardy?

A search began for Ryan but the FBI turned up nothing. Max told Mike that Ryan was gone believing him to be dead. Gwen arrived at the hospital and Max and Mike promised they would help her raise her baby following Ryan’s absence. It turns out though that Ryan isn’t dead after all. He sneaked into the hospital and got the information he needed from Lisa after putting the pieces together. She told him that an elite group of wealthy people had been working with Theo. Ryan then killed her and left the hospital after seeing Max, Mike and Gwen grieving for him.

The Following is available to buy on Blu-ray and DVD with the season 3 release expected later in the year.