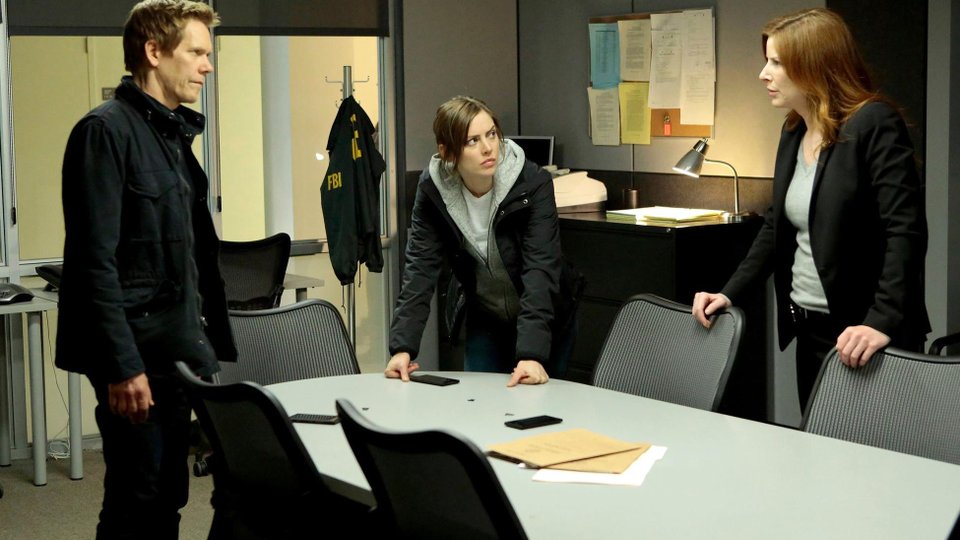 The life of Mike Weston (Shawn Ashmore) hung in the balance as Theo (Michael Ealy) moved to the next stage of his plan.

If you haven’t seen the latest episode of The Following and want to avoid spoilers then stop reading now. If you have seen it and want to relive all of the action keep reading.

A brush with death

Following his brutal attack at the hands of Mark (Sam Underwood), Mike was rushed into hospital with Max (Jessica Stroup) waiting anxiously by his side. Ryan (Kevin Bacon) rushed to the hospital as Mike fought for his life and it was soon confirmed that he was in a serious but stable condition. Gwen (Zuleikah Robinson) arrived at the hospital to support Ryan and Max, and managed to have an honest conversation with Ryan where he assured her he would quit the FBI after the case so he could be a part of his baby’s life and make amends with her.

What Theo and Daisy did next

Theo struggled with the death of his sister Penny (Megalyn Echikunwoke) and contemplated taking his own life before pulling himself together to move on to the next stage of his plan. He promised Daisy (Ruth Kearney) that if everything went according to plan over the next 24 hours, he would let her go free. The duo then went to the hotel where Eliza (Annet Mahendru) was staying, killed her men and forced the mysterious woman’s hand to give him two of her men to help him.

Worried that Theo was going to attack someone personal to him, Ryan increased security around his family and friends. Back at the FBI Lisa (Diane Neal) told him that she tried to suspend him but she was overruled as Ryan is their best chance of finding Theo. In a bid to smoke him out, Ryan held a press conference to ensure that Theo and Daisy’s faces were all over the news making it much harder for them to stay in hiding.

Max returned to work to stay distracted whilst Mike recovered in hospital. She arrived just as a series of tips came in to the FBI but Ryan shot them all down as meaningless. They followed up a lead to a hotel, the same one that Eliza was staying in, after discovering that the cameras in the area had been tampered with. When they arrived Eliza was leaving the hotel but she played ball with Ryan and pretended to know nothing about Theo.

Meanwhile Theo had made his move on his next target, which was Gina Mendez (Valerie Cruz) and her family. Tracking them down to the safe house they were staying in, Theo killed her security detail and put Eliza’s men in their place. Gina noticed that something was wrong when her phone signal was down and she heard a disturbance down stairs. She told her kids to stay in the panic room and as she went down to investigate she found Daisy with a gun to her wife’s head. Theo forced Gina to call Ryan claiming she had a lead in the case to lure him to the safe house.

Of course Ryan realised that it was a trap and told Max and Lisa that Theo was holding Gina captive. Theo’s plan was to kill Ryan in an act of revenge but Eliza called and told him she needed Ryan alive or their deal was off. Ryan and the FBI set up a perimeter outside of the house and Ryan went in alone with backup instructed to follow in 10 minutes. After rumbling the ‘security’ as Theo’s men, Ryan created a diversion so he could get in the house. He attacked Daisy and took her hostage to use as a bargaining chip. Theo threatened to burn the house down and kill Gina’s family, and whilst he was giving his speech Ryan instructed Gina to delay Daisy by trying to appeal to her humanity.

Daisy shot Gina’s wife and Gina pushed her to the floor. She quickly rushed up the stairs and the two women made it into the panic room with Daisy locked on the outside. The FBI rushed the house and Theo escaped with Ryan trailing him. Max came face-to-face with Daisy and shot her dead.

As Ryan pursued Theo, Gwen left him a voicemail to say that Mike’s vitals were stronger and she told him that the ultrasound had gone well. Meanwhile Theo attacked a car with an FBI agent in it, left her injured on the ground then pounced on Ryan when he stopped to help.

The Following continues now on Sky Atlantic HD with the series finale.