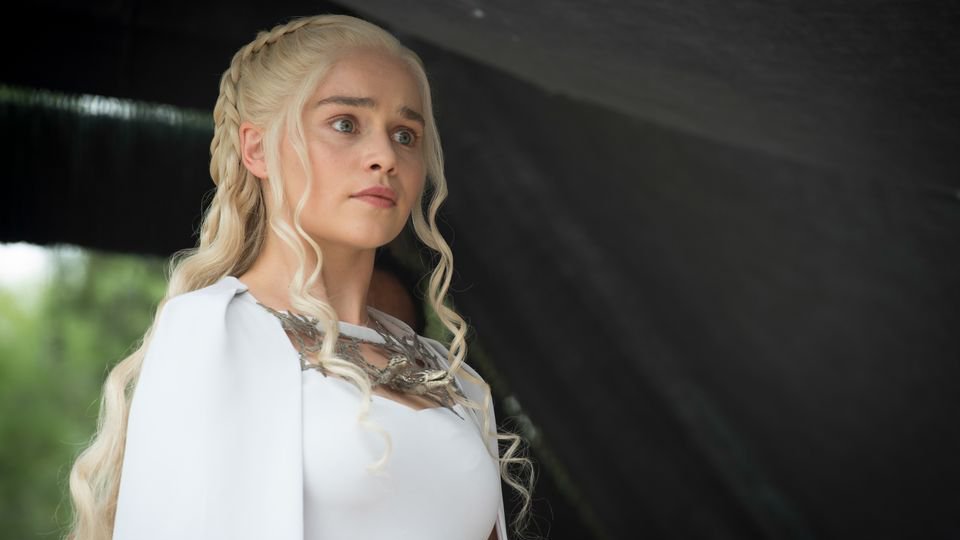 The Gift was written by showrunners David Benioff & D. B. Weiss with Miguel Sapochnik in the director’s chair for the first time.

The episode began at Castle Black as Tormund Giantsbane (Kristofer Hivju) is released to head north with Jon Snow (Kit Harington) to rally the free folk. Jon has to leave Ser Alliser Thorne (Owen Teale) in charge. He wastes no time in telling Jon that his mission is reckless and an insult to the Night’s Watch. We wonder what mischief he’ll get up to while Jon is away?

Jon says goodbye to his best friend Samwell Tarly (John Bradley-West). He gives Jon a gift of dragonglass that he used to kill a White Walker. Jon hopes he won’t have to use it but we hope he does!

Later Sam and Gilly (Hannah Murray) sit with Maester Aemon (Peter Vaughan) who appears to be on his deathbed. He tells them to take their baby south while there is still time. Gilly doesn’t think he’ll last the night and suggests that Sam gets some rest. She’s right and Sam speaks as his funeral in front of his brothers before they light the pyre.

After the funeral Gilly is cornered by two of the men who mean to rape her. Sam steps in and tries to warn them off but they give him a severe beating. As they try to resume their assault Sam somehow manages to summon the strength to stand. As he tries again to save her Jon’s Direwolf, Ghost, appears and scares them off. Gilly cleans Sam up and then helps him break his Night’s Watch celibacy vow.

We predicted that things probably wouldn’t improve for Sansa (Sophie Turner) this week and it turns out we were right. After Ramsay (Iwan Rheon) raped her on their wedding night it seems things have gone much worse. Ramsay has her locked up so he can rape and hurt her as much as he likes. When Reek (Alfie Allen) brings her food we see her sobbing and covered in bruises.

She appeals to Reek to help her and reminds him that he is Theon Greyjoy. He’s too scared of Ramsay and refuses to listen or explain what has been done to him. Sansa gives him a candle and tells him to light it atop the broken tower to signal for help as per Brienne’s (Gwendoline Christie) instructions.

In the next scene it looks like he’s listened and that he’s heading to the tower with candle in hand. Sadly for Sansa it’s the opposite and he takes the candle straight to Ramsay and tells him of her request. Ramsay later summons Sansa and does his normal trick of pretending to be nice. He tells her that Stannis (Stephen Dillane) is coming to attack but is thankful for the current snow storm which will slow them down.

He talks of ruling Winterfell in the future and Sansa challenges him by pointing out that he’s really a bastard and might not be next in line if his fathers new baby is a son. Ramsay tells Sansa the news that her bastard brother Jon Snow is now Lord Commander of the Night’s Watch. He then reveals that Reek told him of her candle plot and takes her to see the skinned corpse of the old lady that was her friend. Will things ever get better for Sansa?

Close to Winterfell we see that Stannis and his army is dug in for the snow storm which has stopped their progress. Things are bad, food is short, horses have died and men have deserted. Davos (Liam Cunningham) wants Stannis to retreat and attack another day. After being forced to retreat at King’s Landing Stannis refuses to do so and says they will march on to victory or defeat.

Stannis seeks reassurance from Melisandre (Carice van Houten) that he will take Winterfell. She says she has seen it in her visions but that it will come at the cost of the blood of Shireen (Kerry Ingram), his daughter. Upset at the thought he tells Melisandre to leave.

Across the Narrow Sea, Jorah (Iain Glen) and Tyrion (Peter Dinklage) are up for auction as slaves. As planned Jorah is bought for his fighting skills and it looks like the pair might get split up. The quick thinking Tyrion appeals to Jorah’s buyer that he should buy him too. When asked why he claims they are a team and that he is also a great fighter. As everyone present laughs at his claim, Tyrion pulls the guard holding his chain to the floor and sets about him. His gamble pays off and he is bought and reunited with Jorah.

Elsewhere in Meereen we learn that Dany (Emilia Clarke) is still sleeping with Daario (Michiel Huisman). The fighting pits are reopening and he suggests that she round up all the slave masters to execute them but she refuses.

Later we see Jorah and other slaves getting geared up ready to fight to the death. He’s not picked for the first round and sits next to a chained Tyrion. In the arena the slaves are surprised to see Dany in attendance. She wasn’t happy about reopening the fighting pits and isn’t happy to be there.

When Jorah spots her he grabs his gear and rushes out to the arena ready to impress his Queen. He makes short work of the other fighters due to his superior combat skills and it looks like Dany is impressed. He stands infront of her and removes his helmet hoping for redemption but instead she orders that he is taken out of her sight.

Jorah appeals and says that he has brought her something. At the same time Tyrion, now free from his bonds, runs out saying that he is the gift that Jorah has brought her. Dany looks surprised but we’re excited to see how she and Tyrion get on. Surely they will make a formidable pair and he could be just what she needs to take the Iron Throne.

In Dorne, Prince Doran Martell (Alexander Siddig) has Myrcella (Nell Tiger Free) brought to her uncle Jaime (Nikolaj Coster-Waldau) to prove that she is in no danger. He explains that he is there to take her back to Cersei in King’s Landing but she refuses. Instead she plans to stay and marry her love Trystane (Toby Sebastian).

Elsewhere in Dorne, Bronn (Jerome Flynn) and the Sand Snakes are being held in adjacent cells. Bronn is singing and is complimented by Tyene Sand (Rosabell Laurenti Sellers). She want him to say that she is the most beautiful woman in the world. When he hesitates she explains that the wound she inflicted upon him was with a poisoned blade. As he succumbs to the poison she opens her dress to him and reveals that she has the only antidote. He agrees that she is indeed the most beautiful woman so she tosses him the antidote.

In King’s Landing Olenna Tyrell (Diana Rigg) appeals to the High Sparrow (Jonathan Pryce) for the release of Margaery (Natalie Dormer) and Loras (Finn Jones). He refuses even when threatened by the Queen of Thorns. She later visits with Littlefinger (Aiden Gillen) who says he has a gift of a mystery man for her.

King Tommen (Dean-Charles Chapman) also wants them freed but is frustrated as he can’t do anything. He tells Cersei (Lena Headey), his mother, he’ll happily use his army to get Margaery her freedom. However having her out of the way is all part of Cersei’s cunning plan. She offers to talk to the High Sparrow to the delight of Tommen but actually has little intention of helping free her. She heads to the Red Keep to pay Margaery a visit in her filthy rags and cell. Cersei pretends to be nice while enjoying Margaery’s misery and does one of her wonderful evil smug smiles as she leaves. Margaery is no fool and knows what Cersei is up to.

Cersei pops to see the High Sparrow to make sure he’s going to see Margaery and Loras punished. He assures her that he will before turning on her. It seems that her plan has backfired and that, thanks to Lancel, she is about to find herself in the same predicament as Margaery. The High Sparrow has her taken into custody and thrown into another filthy cell. We didn’t see that coming and wonder how things will turn out.

Let us know your thoughts on The Gift in the comments below as well as your hopes for the rest of the season.

In this article:Game Of Thrones, The Gift