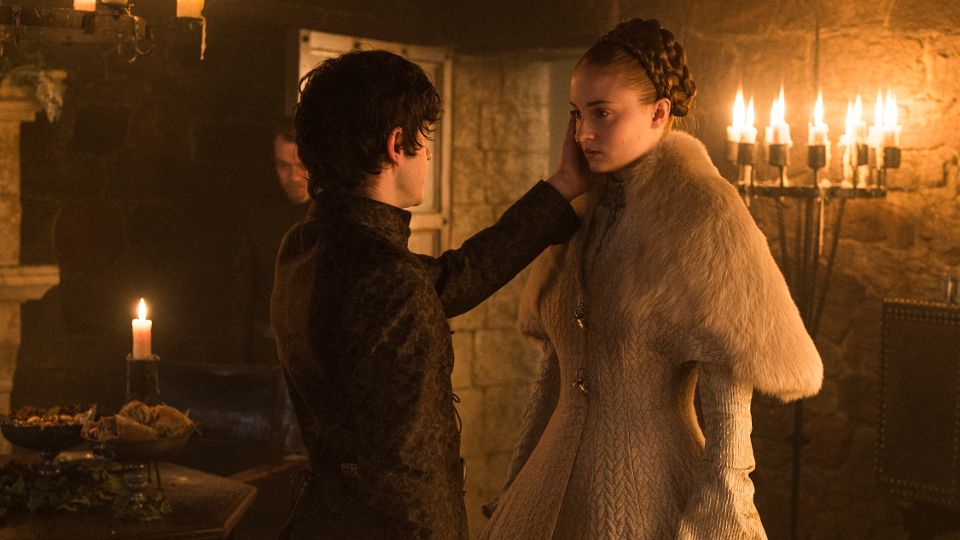 The sixth episode of season five focused on happenings in Winterfell, King’s Landing, Braavos and Dorne.

Unbowed, Unbent, Unbroken was written by Bryan Cogman with Jeremy Podeswa in the director’s chair for the second time this season.

The episode began in Braavos at the House of Black and White where Arya Stark (Maisie Williams) is continuing her bizarre training with the Faceless Men. Like Arya herself we’re not sure why but she’s spending her days washing dead bodies. These are then whisked away through a mysterious door and she isn’t allowed to see what is beyond.

She’s getting frustrated with her Karate Kid style training and wants to progress. Jaqen H’ghar (Tom Wlaschiha) later tests her with another round of the ‘Game of Faces’. Arya is asked who she is and has to tell her life story. Jaqen is able to detect if she is lying and each time she does he gives her a crack with a stick. Most interesting is when she talks of hating The Hound and Jaqen repeatedly strikes her proving her claims are a lie.

Later a man brings his sick daughter to the House and Arya listens to him before talking to the girl. She tells the girl that their fountain is able to heal her and the girl believes her before drinking the lethal water. This appears to impress Jaqen as he then allows Arya past the mysterious door.

It leads down some stairs to a Hall of Faces which we presume is what happens to the bodies that Arya has been washing. There are hundreds of faces on display around the room. Jaqen says he doesn’t feel that Arya is ready to become no-one but that she might be ready to be someone else. We wonder if we’ll recognise her next time we see her?

Across the Narrow Sea we join Jorah (Iain Glen) and Tyrion (Peter Dinklage) as they continue their journey to Meereen on foot. Jorah is still concealing the fact that he was touched by the stone men and infected with greyscale. Tyrion is grumpy due to lack of food and lets slip that Jorah’s dad is dead which is news to Jorah.

After apologising he ponders Jorah’s plan to hand him over to Dany (Emilia Clarke) and points out that it’s not likely to turn out as well as Jorah hopes. They then run into some slavers who consider selling Jorah and killing Tyrion. The quick thinking Tyrion manages to persuade them otherwise and suggests they would make a lot more money with him alive and sending Jorah to the re-opened Meereen fighting pits.

In King’s Landing Littlefinger (Aiden Gillen) has a run in with Lancel (Eugene Simon) and the Faith Militant. He manages to talk his way out of the confrontation and meets with Cersei (Lena Headey). She wants to know if the Knights of the Vale would fight for them. The scheming Littlefinger suggests he takes them to Winterfell to mop up after the impending battle between the Bolton’s and Stannis (Stephen Dillane). He explains that he lives to serve and that for his effort he should be made the new Warden of the North. Cersei agrees to talk with the King.

Later the fantastic Lady Olenna Tyrell (Diana Rigg), Queen of Thorns, returns to King’s Landing. She’s come to help Margaery (Natalie Dormer) free her brother Loras (Finn Jones) and is prepared to go head to head with Cersei. There’s a fabulous exchange between Olenna and Cersei but little progress is made.

Instead it falls to the High Sparrow (Jonathan Pryce) to hold a hearing to determine the fate of Loras. After questioning him he also insists on questioning Margaery who supports Loras’s claims that he has done nothing wrong. High Sparrow then brings in the squire that Loras was sleeping with in order to prove that both Loras and Margaery are lying. To the horror of Olenna they are both taken into custody while Tommen (Dean-Charles Chapman) sits there helpless and Cersei gives an evil smirk.

In Dorne Ellaria Sand (Indira Varma) is prepping the Sand Snakes for battle. Myrcella (Nell Tiger Free) and Trystane (Toby Sebastian) are walking the gardens together and talking of marriage while Doran (Alexander Siddig) looks on.

Nearby, disguised as Dornish guards, Jaime (Nikolaj Coster-Waldau) and Bronn (Jerome Flynn) are approaching on horseback. They plan to rescue Myrcella and enter the gardens to try. They confront Myrcella and Trystane but she doesn’t want to leave and Bronn ends up smacking Trystane to the ground.

Suddenly the Sand Snakes appear and a fight ensues. They seem fairly evenly matched but before anyone has a chance to come out on top they are surrounded by Doran’s guards. After being forced to surrender their weapons they are arrested. We were expecting more from the Sand Snakes and that scene left us feeling a little disappointed.

Finally we head to Winterfell to join Sansa Stark (Sophie Turner) on her wedding day. Weddings rarely go well on Game of Thrones and Sansa has some of the worst luck imaginable so we’re more than a little worried. Myranda (Charlotte Hope) arrives at Sansa’s room to bathe her. What seems like a nice gesture quickly turns into Myranda pretending to warn Sansa about Ramsey (Iwan Rheon) while actually just attempting to scare her. Instead of sitting quiet Sansa speaks out for a change and puts Myranda in her place.

A short while later Theon/Reek (Alfie Allen) arrives to walk Sansa down the aisle. She refuses to hold his arm and the nervous Reek expects he will be punished by Ramsay. He gives Sansa away and Ramsey puts on a display of fake niceness for the few gathered.

The final scene is particularly hard to watch as Ramsay joins Sansa to consummate the marriage. He demands to know if she is still a virgin and warns her against telling him lies. He then demands that she undresses and tells Reek that he must watch. He rapes poor Sansa in front of Reek and she doesn’t fight back. We were hoping Theon might try and intervene but he just stands watching terrified.

At this point we think we might actually hate Ramsey more than Joffrey. Surely Sansa’s luck will change and we hope that Theon will eventually save her. It will be interesting to see who wins between the Bolton’s, Stannis and Littlefinger.

Let us know your thoughts on Unbowed, Unbent, Unbroken in the comments below as well as your hopes for the rest of the season.