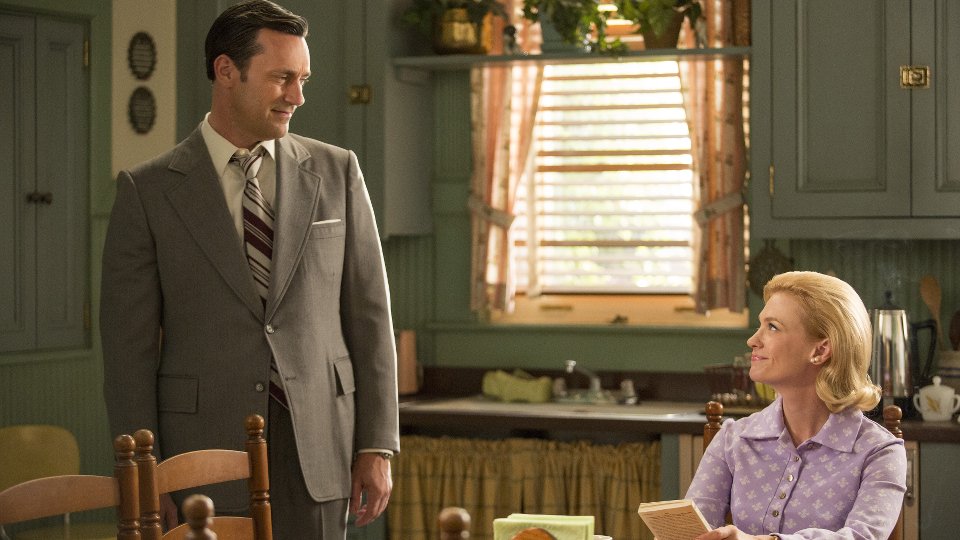 Change is never easy and you’d think after all of the changes that Don Draper (Jon Hamm) and co have been through that they’d know that only too well.

If you haven’t seen the latest episode of Mad Men and don’t want any spoilers we suggest you stop reading now. If you have seen it and want to relive the action then keep reading.

The man who isn’t there

Don didn’t have his feet on the carpet of his new office for long before he did a disappearing act. After accepting Meredith’s (Stephanie Drake) offer to help decorate his new apartment, Don attended a creative meeting for Miller that was more of a bun fight than he was used to with half of McCann Erickson’s creative jostling for attention.

Following the meeting Don did a disappearing act and went to Betty’s (January Jones) to pick up Sally (Kiernan Shipka) only to find his strong-willed daughter had found a lift back to school with a friend. A pleasant exchange took place between Don and Betty, whilst the latter tried to study for her psychology course, and then Don hit the road. Whilst driving he had a chat with the ghost of Bert (Robert Morse) who warned him not to keep pursuing Diana (Elizabeth Reaser).

Of course Don didn’t listen and off her went to the house that he’d tracked her down to. Upon arriving it turned out that the house belonged to Diana’s ex-husband, who had now remarried. Don made up a lie about being a representative of a research firm looking for Diana who had won a fridge full of Miller beer. He got himself invited into the house but when Diana’s ex arrived home his ruse was discovered and he was asked to leave. As Don got into his car the ex-husband warned that Diana has left many men in her wake and warned him he would never change her.

Continuing his drive west to St Paul, Minnesota Don picked up a hitchhiker.

Joan on the outs?

She’s always been one of the smartest cookies in the box but Joan (Christina Hendricks) predicted her own fate in last week’s episode. As soon as she heard about the move to McCann Erickson, Joan realised that her time as an account manager may be nearing an end. This week she found out just how true that was when she tried to maintain the status she’d grown accustomed to at SC&P. First she had to put up with a new colleague who upset Avon during a conference call, then she went over his head to Ferg (Paul Johansson) who offered to help her out but expected sexual favours in return.

As she tried to figure her way out of that situation, and turned down an offer of help from Don, Joan decided to go one step further and complain to Jim Hobart (H. Richard Greene). Poor Joan didn’t quite get the reaction she expected and when she threatened to go to the press about the way women were treated at McCann, Jim made it quite clear that he didn’t care about her status at SC&P and assured her she wouldn’t get anywhere with her complaints.

Roger (John Slattery) got dragged into the situation thanks to Jim and he told Joan that she should accept a cash payout of half of what she was owed, and walk away from the company. Surprisingly Joan admitted defeat, packed up her desk and left.

While everyone else had cleared out of the SC&P offices, Peggy (Elisabeth Moss) found it hard to say goodbye. Using the excuse that her new office wasn’t ready, following a mix-up where she was mistaken for a secretary, Peggy spent much of the episode wandering around the SC&P offices moving from angry to thoughtful as she contemplated what the future holds for her. She wasn’t alone though as Roger was putting off the move too and the two had a frank exchange before getting drunk. That culminated in Peggy rollerskating around SC&P whilst Roger played the organ.

Mad Men continues Sunday at 10/9c on AMC in the US and Thursday at 10pm on Sky Atlantic HD in the UK. Watch the preview for next episode, The Milk and Honey Route, below: