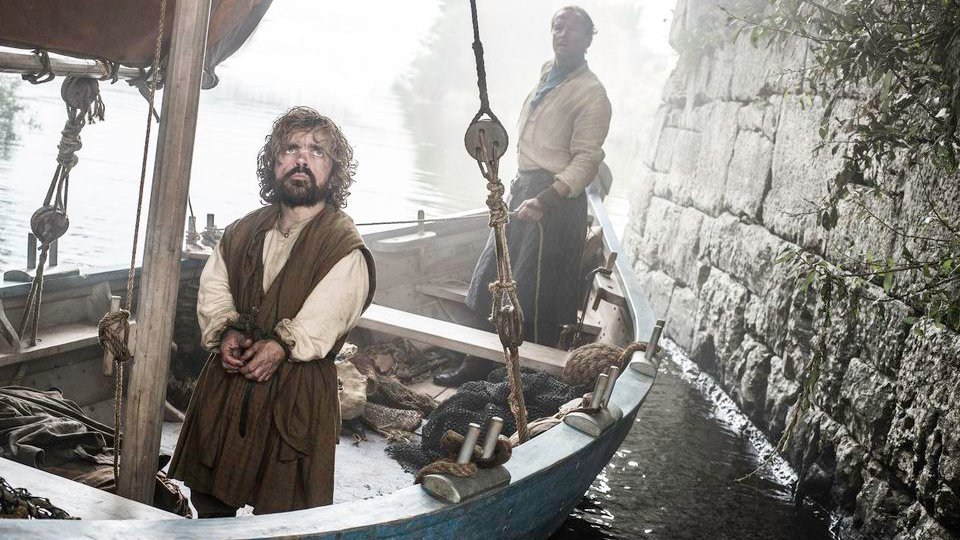 The fifth episode of season five focused on happenings in Meereen, Castle Black, Winterfell and Valyria.

Kill the Boy was written by Bryan Cogman with Jeremy Podeswa in the director’s chair for the first time.

The episode quickly addressed the cliffhanger surrounding the fates of Ser Barristan (Ian McElhinney) and Grey Worm (Jacob Anderson). As we predicted last week the wounds suffered by Ser Barristan were fatal but Grey Worm has survived. He’s been watched over by Missandei (Nathalie Emmanuel) and it looks like his condition is of no immediate concern. He feels that he has failed his men, Ser Barristan and Daenerys (Emilia Clarke).

Dany is furious at the Sons of Harpy for the death of Ser Barristan and wants revenge. She forces some of the Masters to the cave where she is keeping her dragons Rhaegar and Viserion. Keen to prove the point that she won’t be crossed she throws one of them to his death. The dragons set about him, burning him to death and then sharing him by ripping him in two. The other Masters understandably fear for their lives but Dany decides to spare them for now while quipping that she doesn’t want to overfeed her dragons.

Later Dany decides that she needs to get the people of Meereen back on her side and agrees to re-open the fighting pits. She also makes a surprising decision to marry Hizdahr zo Loraq (Joel Fry).

At Castle Black we see Samwell Tarly (John Bradley-West) talk to Maester Aemon (Peter Vaughan) about what his spies say Dany is up to. Jon Snow (Kit Harington) pops in for a chat and a spot of advice. Aemon isn’t too bothered about finding out what Jon is planning he just trusts that he will do the right thing and tells him to ‘Kill the boy and let the man be born’.

Jon understands and meets with Tormund Giantsbane (Kristofer Hivju). Jon wants Tormund to take over from Mance Rayder and lead the Wildlings. Tormund is wary but Jon unshackles him then proposes an alliance and suggests bringing those North of the Wall back for safety. Tormund says he will only agree if Jon accompanies him to tell them himself and says they will also need ships. Jon says he will ask to borrow the fleet of Stannis (Stephen Dillane).

Jon meets with the Night’s Watch to tell them the news which proves rather unpopular. After countless years of fighting and killing each other they are more than a little reluctant to ally with the Wildlings. As Jon leaves with Tormund we see Stannis and his army heading out to march on Winterfell.

Brienne (Gwendoline Christie) and Pod (Daniel Portman) arrive at an inn near Winterfell. Brienne wants to be close to Sansa (Sophie Turner) as she realises that she is in danger. She manages to get one of the locals to pass a message on to Sansa telling her to light a candle in the broken tower should she need help.

In Winterfell Ramsay Bolton (Iwan Rheon) is still messing about with Myranda (Charlotte Hope). She’s really not happy about his upcoming marriage to Sansa. After being with Ramsay she goes and finds Sansa. She pretends to like her and compliments her on her dress that she made herself with the skills taught to her by her mother Catelyn Stark.

She then tells Sansa that there is a surprise for her at the back of the kennels. Sansa heads in nervously and we wonder if there is a trap set for her but instead she discovers Theon/Reek (Alfie Allen). Sansa thinks that he killed her brothers and leaves upset which was probably Myranda’s aim all along.

Ramsay confronts Reek as he knows that he is hiding something. Reek confesses that Sansa has seen him and kneels worriedly when ordered to by Ramsay. He asks for Reek’s hand and we’re expecting an outburst of violence but instead he forgives him. It seems Ramsay is still taking great delight in playing his twisted games.

Later, at one of the strangest ‘family meals’ we’ve ever seen, Roose (Michael McElhatton) and Walda Bolton (Elizabeth Webster) sit to eat with Ramsay and Sansa. Ramsay continues his games and proposes a toast to the upcoming wedding. Reek enters and Ramsay points out Reek to Sansa while absolutely loving how uncomfortable he’s making her. Unable to contain his warped sense of humour he then suggest that Reek give her away at the wedding. Finally he forces Reek to apologise for murdering her brothers.

Disgusted at Ramsay’s antics at the dinner table Roose realises he can go one better and announces that Walda is pregnant. The thought of his father having a non-bastard son worries Ramsay about his position in the family. Roose later tells Ramsay how he executed his mother’s husband then raped her nearby. We’re not sure how much more messed up the Bolton’s can be and look forward to the arrival of Stannis.

Back across the Narrow Sea we see Jorah (Iain Glen) and Tyrion (Peter Dinklage) arrive at the ruined city of Valyria. There’s something sinister awaiting them but they are distracted by the magnificent sight of Drogon soaring above. Had they been paying more attention they might have noticed the ruins are full of ‘Stone Men’. These are people who have contracted the greyscale disease that Shireen Baratheon suffers from.

Before they notice the Stone Men attack by jumping down from the ruins into their little boat. Tyrion is rather helpless as his hands are still bound and manages to save himself by throwing himself overboard. As he sinks into the murky depths Jorah gets stuck in and fights for his life. Down below Tyrion looks doomed as a greyscale attacks and everything fades to black.

Thankfully the episode didn’t end there with a cliffhanger and we got to see what happened next. Jorah managed to rescue Tyrion and get him to shore. They now face the prospect of completing their journey on foot. More worrying though is that Jorah has been touched by greyscale, which he decides to keep to himself. We hope Tyrion hasn’t also been infected and wonder if Jorah will succumb to the disease?

Let us know your thoughts on Kill the Boy in the comments below as well as your hopes for the rest of the season.

Advertisement. Scroll to continue reading.
In this article:Game Of Thrones, Kill the Boy