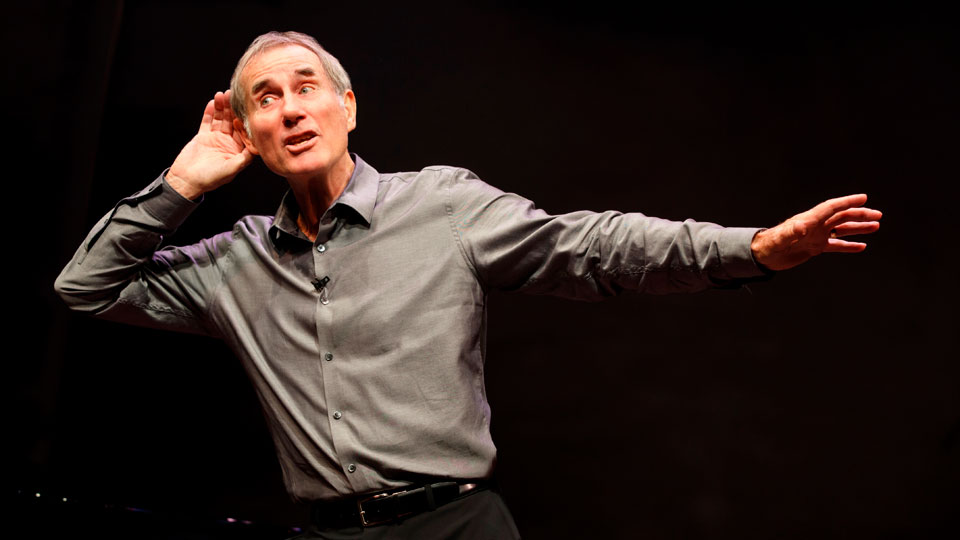 Jim Dale is an entertainment icon whose incredible half-century and more in showbiz is about to be celebrated in his one-man show, Just Jim Dale, which plays at the Vaudeville Theatre from the end of May.

Jim Dale is known to British audiences for his iconic appearances in the Carry On franchise, and to US audiences for his narration of the Harry Potter novels. A rich and varied career has seen Jim gain considerable success on stage, film and television, with more than a few hit records under his belt too.

We caught up with Jim to ask what audiences can expect from his show, what it was like playing Spike Milligan on film, and how he accounts for his enduring appeal.

What can audiences expect from Just Jim Dale?

I have not appeared as myself on the London stage or television for forty years, so it will be an evening of getting to know, mostly through laughter, who Jim Dale has now become.

Will there be any differences to the Broadway run?

Some American words or expressions have had to be changed or edited out, but the content remains the same.

Do American audiences know the Carry On movies?

I do believe the Carry On films are at last being shown on cable television in the States. I am being stopped more often by insomniacs who say, “Hey man, didn’t I see you at around four o’clock this morning?”

How do you feel to be returning to the Vaudeville Theatre?

My first West End musical was at the Vaudeville exactly fifty years ago this year. I walked onto the theatre stage a few days ago and not only did it bring back memories, it also bought back the words and I started to recite the lines of my character from ‘all those years ago!’

Will you perform any of your songs?

Yes. I have eight songs in the show. I am lucky to have great pianist, Mark York, who manages to hit every note I do, thank God!

How does your own show compare to working for a company headed by Laurence Olivier?

In any play you and your fellow actors have their individual moments on stage, and all share in the success or failure of that evening. A one man show means you are out there on your own. There’s no one to pick up a missed cue, no one to share your nerves with. But I’m not quite on my own. I have my pianist Mark York, and my audience who become my partners in comedy.

You do a remarkable job playing Spike Milligan in Adolf Hitler: My Part In His Downfall.

Yes, I loved it, one of my favourite films. It was only three years ago that I found out I had been nominated for a 1972 BAFTA Award in the category, “Best Newcomer”. Nobody told me at the time as I was in America. Some fan happened to mention it in an e-mail recently. I checked with BAFTA, they said, “Whoops!” It was still in their file. It is now in mine!

Do you talk about that at all?

Not enough time. But after this short season I am hoping my team and I can start work on the next one man show, so who knows?

You’ve become well-known in the US as the voice of the Harry Potter audio books. Have you found that fulfilling, and what’s it been like winning a new generation of young fans?

It is a great feeling knowing that you have been part of millions of children’s lives for eight years. After the series lots of youngsters got in touch and asked what they should listen to next. It resulted in me narrating many classics such as, “A Christmas Carol”, “Alice in Wonderland”, “Peter and the Wolf”, “Peter Pan” and “Round the World in Eighty Days”.

What’s the key to your enduring success in showbiz?

Unlike the old days when one had to accept any job to be seen by an agent or to earn a living, I am now in a position of being able to wait for the right script with the right director and then work with terrifically talented actors. That way everyone is a winner – most of all the audience.

Jim Dale appears in Just Jim Dale at the Vaudeville Theatre, London from 26 May – 20 June. For tickets visit: www.justjimdale.com.