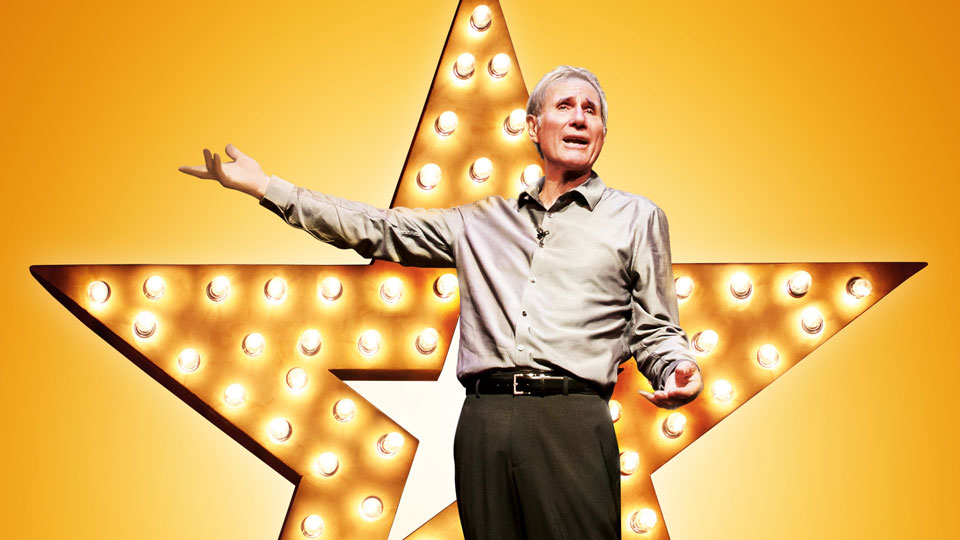 One man and one pianist: but what a great West End show! Two hours in the warm, funny and relentlessly entertaining company of Jim Dale is theatre heaven.

Currently occupying the Vaudeville Theatre, where he started out in the West End half a century ago, the sprightly septuagenarian retains his capacity and desire to entertain audiences by bringing his one-man show from his adopted country of the US to the city of his birth.

Dale opens his act with a witty ditty from the music hall era, and that’s a subject he returns to throughout the show, since it’s what drew him to be an entertainer in the first place. There’s plenty of nostalgia in Just Jim Dale, as he recalls his childhood, his music hall roots and his pop career, as well as his huge successes in the Carry On films, with Olivier’s National Theatre Company and on Broadway. Nostalgia is embraced, but the jokes come thick and fast, and Dale frequently sends himself up. It’s impossible not to be completely charmed from start to finish.

As something of a Renaissance Man, Dale has admirers for his many talents; but all are catered for in the show. Fans of his musical theatre legacy will get to see him sing one of the hits from Barnum, the show that launched him on Broadway; and after giving his pop career a delightfully tongue-in-cheek airing, he sings his best-loved song Georgy Girl and recalls the “mostly true” (a running joke) story of how it came about. Pianist Mark York provides the music, and Dale finds inventive ways to weave the musician into his tapestry of gags and tales.

Whilst Dale’s singing voice remains fine, if not quite as intense and powerful as it once was, his capacity for impressions is completely undiminished. A highlight for us is a superb take-off of Laurence Olivier as he reminisces about his National Theatre years. The climax of that segment is an extraordinary round-up of Shakespearean words and phrases that remain part of our everyday vocabulary, in which Dale demonstrates his capacity for linguistic acrobatics.

Of course, there’s also his impression of Kenneth Williams, used in the story of how he came to be involved as a member of the Carry On team. A projection of some of his best-loved stunts are a treat for the slapstick fan. Those present at the press night will forever remember his extraordinary reunion with co-star Barbara Windsor. “Stand up, Barbara. Are you standing…?” Let’s just say she gave as good as she got…

Known to a new generation on the other side of the Atlantic as the narrator of the Harry Potter books, Dale uses his skill at physical comedy to recreate his inauspicious beginnings in audio books, which will appeal to younger fans.

Covering so much ground during a six-decade and counting career, Just Jim Dale is pure entertainment, hosted by a born storyteller who knows how to wrap an audience around his little finger and keep them hooked and amused for the duration. There’s something here for everyone. The show allows Dale to look back on his life and achievements and treat them as parts of an interconnected story. Yes, parts of it are sentimental, yet it’s a story told with great wit, self-deprecation and sincerity, so you’d have to be an outright cynic to not love it.

With a limited run, we strongly recommend you don’t miss out on the chance to spend an evening in the mesmerising company of a legend.