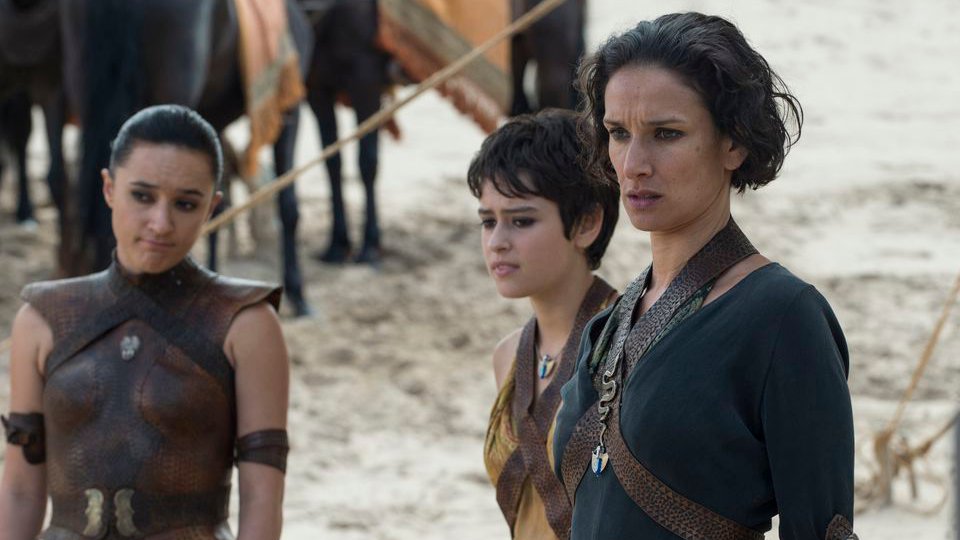 After three week’s of set up we were treated to a more action packed fourth episode as everything starts to kick off.

The Sons of the Harpy was written by Dave Hill with Mark Mylod in the director’s chair for the second time this season.

The episode began with Jorah Mormont (Iain Glen) kn0cking an old chap out and stealing his boat. At the end of last episode he kidnapped Tyrion Lannister (Peter Dinklage) and wants the boat to take Tyrion off to Daenerys Targaryen (Emilia Clarke). She exiled Jorah last season for betraying her and thinks giving her Tyrion might get him back into her good books.

What he doesn’t know until later in the episode is that Tyrion was on his way there anyway. Tyrion is quite relieved when he realises just who Jorah is and where he is going as he presumed he was been taken back to his sister Cersei (Lena Headey) who has a price on his head. As Tyrion points out Jorah’s plan could go either way and it will be interesting to see what happens to them both.

Elsewhere we see Jaime Lannister (Nikolaj Coster-Waldau) and Bronn (Jerome Flynn) aboard a ship to Dorne. They are on a mission to try and rescue Myrcella Baratheon (Nell Tiger Free) from House Tyrell.

Before reaching it’s destination they depart via rowboat in an effort to arrive undetected. There mission sounds impossible so they need to be careful. Unfortunately for them they are double crossed by the ship’s captain and soon run into trouble.

A fight with four Dornish guards who are on horseback takes place and three of them are easily dispatched by Bronn. Jaime takes on the fourth himself and gets to properly try out his sword skills with his left arm having lost his right hand. He puts up a good fight and is finally saved thanks to the sword of his enemy getting stuck in his fake golden hand.

In King’s Landing Cersei continues her scheming and sends Mace Tyrell (Roger Ashton-Griffiths), the Master of Coin, off to the Iron Bank with Ser Meryn (Ian Beattie). Cersei also meets with the High Sparrow (Jonathan Pryce) and reinstates the Faith Militant. She allows him to arm them and they raid the brothels around King’s Landing. One raid results in the arrest of Loras Tyrell (Finn Jones), which was probably Cersei’s plan all along.

The arrest of Loras sends his sister Margaery into a rage and she demands to her husband, King Tommen (Dean-Charles Chapman), that he be released. Tommen is young and inexperienced and completely out of his depth as King. He doesn’t want to upset anyone and Margaery can easily manipulate him. Her outburst sends him to his mother Cersei to ask for the release of Loras but she tell him that it is not her doing and that he is the King.

Tommen heads off to talk with the High Sparrow but he fails to even meet with him. The High Sparrow’s followers block him and when Tommen realises that the only way through would be violence he heads back home.

At Castle Black Lord Commander Jon Snow (Kit Harrington) is training his men. There are only around 50 of the Night’s Watch left so they write to the different armies of the North asking for their support. To the disgust of Jon this includes Roose Bolton (Michael McElhatton) who killed his brother and is currently ruling his old home of Winterfell.

Melisandre (Carice van Houten) attempts to seduce Jon Snow in an effort to get him to ride south with Stannis Baratheon (Stephen Dillane). Jon turns her away as he hasn’t got over the death of Ygritte and his loyalty is now to the Night’s Watch.

At Winterfell the scheming Littlefinger (Aiden Gillen) finally reveals his plans to Sansa Stark (Sophie Turner). He’s hoping putting her at Winterfell with the Boltons will put her in a strong position. He knows that Stannis plans to retake it and feels that he will place Sansa in charge. To her disappointment he’s leaving her as he heads back to King’s Landing at the request of Cersei. He manages to steal one of his creepy kisses from her before he departs. We’re not convinced that things are going to go quite so well for Sansa as he thinks.

Back in Dorne we join Ellaria Sand (Indira Varma) and finally meet some of the Sand Snakes (the bastard daughters of Prince Oberyn Martell). She talks with Obara (Keisha Castle-Hughes), Tyene (Rosabell Laurenti Sellers) and Nymeria (Jessica Henwick). They have captured the captain who brought Jaime and Bronn to Dorne and have him buried up to his neck in sand.

Ellaria wants to avenge the death of Oberyn and tells them to choose between Doran’s way of peace or her way of war. They all opt for war and Obara throws her spear through the head of the captain just to show that she really means business.

In Meereen the Sons of the Harpy are clashing with Dany’s Unsullied. The Sons of the Harpy stage an ambush against Grey Worm and he and some of his soldiers end up trapped and outnumbered. As they try to fight their way out there are many deaths on both sides but the Unsullied can only hope to take as many with them as possible.

Grey Worm is the last Unsullied standing and shows why he was picked to lead as he brings death to his attackers. Things are looking really bad for him though until Ser Barristan comes to his aid and gets stuck in. Barristan is one of the best swordsmen in the Seven Kingdoms and slices his way through the enemy. The opposition prove too much and he takes what look like fatal wounds. Grey Worm also takes a knife to his side and manages to get to Barristan.

The episode ends before we discover their fate but we’ve got a feeling that one of Dany’s top fighters just fought his last battle.

Let us know your thoughts on The Sons of the Harpy in the comments below as well as your hopes for the rest of the season.

In this article:Game Of Thrones, Sons of the Harpy