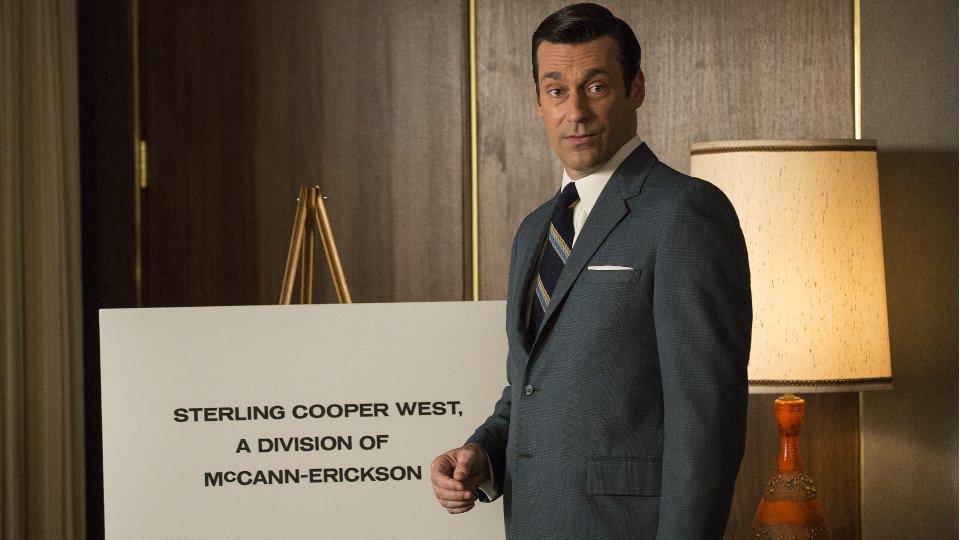 A curveball arrived in the latest episode of Mad Men that leaves us wondering where the last three episodes are going to take us.

If you haven’t seen the latest episode of Mad Men and don’t want any spoilers, we suggest you stop reading now. If you have seen it and want to relive all the action then keep reading.

Things escalated pretty quickly this week when Roger (John Slattery) discovered that the lease for the offices hadn’t been paid. Initially blaming Dawn (Teyonah Parris), it transpired that it wasn’t a clerical error at all. In fact it was a deliberate move by McCann Erickson who was putting the wheels in motion to dissolve SC&P and move the staff into their building.

In a panic Don (Jon Hamm), Roger, Joan (Christina Hendricks), Ted (Kevin Rahm) and Pete (Vincent Kartheiser) came together to try and come up with a way of avoiding the dissolution. After Don learned that Lou (Allan Havey) was off to Japan to make his comic book into a film, he pitched to the partners that they speak to all of the conflicts in their accounts that would have to be dropped if the dissolution happened. The plan was to use the L.A. office as their base, establish SC&P West so that they retain their independence.

After speaking to the accounts, they managed to get a decent plan together – although they lost Dow after Ken (Aaron Staton) refused to play ball – and entered the McCann meeting with a presentation. Before Don got far he was stopped by the powers that by who explained they would all be given top positions with big name clients in the dissolution and that the decision was already made.

Leaving the meeting, the feeling was mixed with only Ted happy about the upcoming changes. The partners headed to a bar to drown their sorrows with Joan and Pete leaving earlier. Joan confessed that she believed she’d be forced back into a secretarial role and not taken seriously once the changes happen. Pete assured her that once they got to know her that wouldn’t happen.

The next day Roger made an announcement to the firm after rumours circulated and a hysterical Meredith (Stephanie Drake) confronted Don. Before he could finish speaking the staff were in an uproar with only Harry (Rich Sommer) seeing the news as a good thing.

Peggy (Elisabeth Moss) spent the episode auditioning children for a toy commercial with Stan (Jay R. Ferguson). She was interrupted by a distraught Pete who told her about the changes and wanted to give her a heads up before they happened. He did stress she should keep the news to herself but it didn’t take her long to tell Stan. She chose to deliver the news whilst they were watching a little girl whose mother had left her after the audition to go and pick up her other child. Whilst they were busy chatting, the little girl put a staple in her finger just at the moment her mother returned to pick her up. Peggy reacted angrily towards the mother and an argument broke out leading Stan to declare that Peggy hates kids. Later in the episode Peggy confessed to Stan that she didn’t hate kids and ended up telling him about the son she abandoned years earlier. She omitted to mention that the father of the child was Pete though.

Peggy also started to think about her future and made the decision to meet with a head hunter to see what prospects were out there. She was told that McCann was her best option and after much thought she told Stan she would go to McCann and see what happens.

When not dealing with the company news, Pete rushed to his estranged wife Trudy’s (Alison Brie) aid when their daughter failed to get into her chosen school. Putting on a united front the couple attended a meeting at the school and it turned out that there was a long-standing feud between the Campbells and the people who ran the school. As the admissions man riled Pete up and point blank refused to change his mind on allowing their daughter to attend the school, Pete punched him in the face.

We should also note that it was revealed that Trudy applied to no other schools leaving her daughter’s education in jeopardy. Pete assured her that he would fix it.

We never expected to be asking this question but where has Diana (Elizabeth Reaser) gone? First of all she called Don twice at his apartment building but didn’t leave any messages. Then Don went to her apartment only to find she’d gone and a gay couple had moved in. They informed Don that Diana left her furniture and no forwarding address.

Mad Men continues on Sunday in the US on AMC at 10/9c and on Thursday in the UK on Sky Atlantic HD at 10pm. Watch the promo for the next episode, Lost Horizon, below: