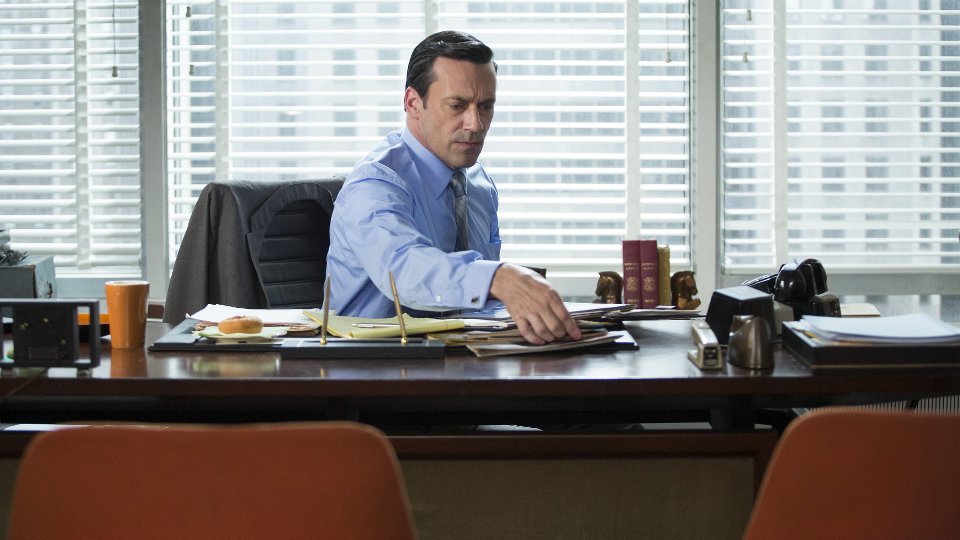 Don Draper (Jon Hamm) found himself pondering the future in the latest episode of Mad Men.

If you haven’t seen the latest episode of Mad Men and don’t want any spoilers then stop reading now. If you have seen it and want to relive all of the action then keep reading.

Looking to the future

Roger (John Slattery) gave Don the job of thinking about the future of the company when he asked him to pull together some materials for a meeting he had coming up. Thinking long and hard, Don turned to Ted (Kevin Rahm) for inspiration and eventually Peggy (Elisabeth Moss), who demanded a performance review and revealed her ambitions for the future.

Don also found time to take Sally (Kiernan Shipka) and her friends out for dinner where they talked about the future and their career hopes. Sally was left disgusted when Don flirted with her 17 year old friend and the two had an unpleasant exchange when Don was seeing Sally onto the bus for her summer trip. Sally said that Don couldn’t control himself and had a go at him for flirting with her friend. She then said Betty was similar when it came to men giving her attention and voiced her hope that she wouldn’t turn out anything like either of her parents. Don warned her that she will eventually learn that she is very like them.

Don was looking for a bit of closure in his life following the finalisation of his divorce from Megan (Jessica Pare). He put his apartment on the market and with the help of his plucky real estate agent, he managed to sell it despite the apartment being empty thanks to Megan’s mother taking all of the furniture.

John Mathis found himself unemployed after embarrassing the firm in front of a client, not once but twice! During a pitch for Peter Pan Cookies, Mathis butted heads with Ed (Kit Williamson) leading to a foul-mouthed outburst. Pete (Vincent Kartheiser) was furious and wanted to sack him but Peggy managed to get Don on side and save his job. Following his indiscretion Mathis asked Don for advice on how to apologise to the client and Don told him to turn it into a joke. Unfortunately Mathis took Don a little too literally and wheeled out one of Don’s jokes that backfired spectacularly. Angry, he had a go at Don which led to him being fired.

Joan (Christina Hendricks) paid Lou Avery (Allan Havey) a visit in Los Angeles to help with some recruitment and met a new love interest. Wealthy divorcee Richard Burghoff (Bruce Greenwood) walked into Joan’s office by mistake and two wasted no time in arranging a date. After returning to New York, Joan was surprised when she got a call from Richard saying he was in town and wanted to take her out.

The two shared a nice evening that came to an abrupt end when Richard explained to Joan that he had no desire to be with a woman who had a small child as he already raised his own kids. Joan stormed off out of the hotel and took her frustration out on the babysitter the next morning. Richard arrived at the offices to apologise to Joan and told her he wanted to be part of her and her son’s lives. Joan admitted she would have chosen him over her own son had she had to and that she was considering sending her son away.

The boy next door

Glen (Marten Holden Weiner) popped up in the episode looking very different from the last time we saw him. Stopping by the Francis house to see Sally, Glen announced to his friend and Betty (January Jones) that he had enlisted and had stopped by to say farewell. Whilst a flustered Betty was surprisingly supportive, Sally didn’t take the news so well and stormed off.

Following her outburst Sally tried to contact Glen and broke down on the phone to his mother. Sadly Sally didn’t get to say goodbye to Glen before he left but Betty had another encounter with him. Now 18, Glen made a move on Betty which she almost reciprocated before telling him she couldn’t as she was married. She assured him he would stay safe and the two shared an intimate moment before he left the house.

Tune in to AMC at 10/9c on Sunday in the US and Sky Atlantic HD on Thursday in the UK to see the next episode. Watch the promo for next episode Time & Life below: